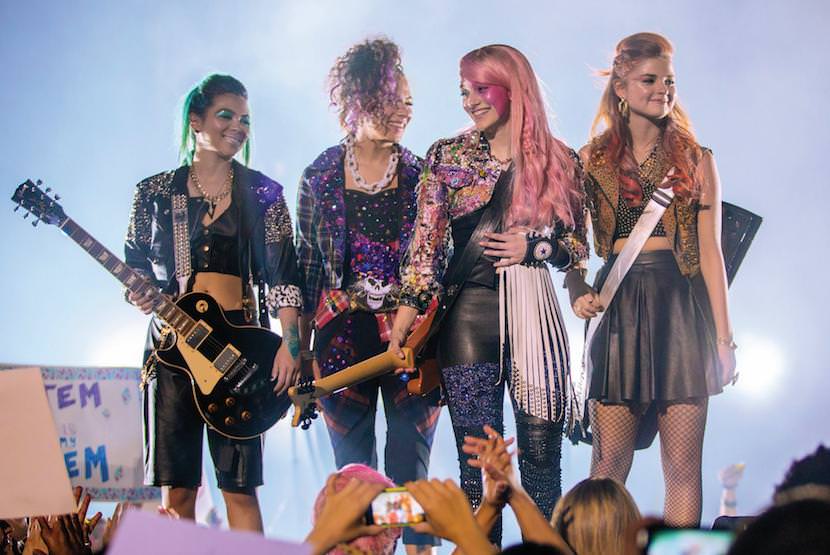 Opening on Friday is director Jon M. Chu’s mildly more believable, live action version of the 80s classic cartoon Jem and the Holograms. The original Hannah Montana, before Miley Cyrus was even a twinkle in Billy Ray’s eye, cartoon Jem was a regular girl in disguise as a rock star, a feat made possible by a one-of-a-kind hologram machine named Synergy, a magical pair of earrings, and endless glitter, guts, and goodwill. In the cartoon, Jerrica Benton, aka Jem, is left to fend for herself after her father dies, leaving her his business, Starlight Music, and mostly inexplicably, a foster home for girls which is also named Starlight. Various conniving adults plus competing pop groups enter the picture to destroy what Jerrica seeks to preserve and alter ego Jem hopes to create, leaving Jerrica/Jem and her girl squad no choice but to foil episode upon episode of evildoers by becoming rockstars.

The movie version of the story more or less sticks to the major plot points (deceased father, childhood best friends-turned-bandmates, success via fame and glory) but updates the minor details to make Jerrica’s path to stardom a little less wacked out 80s sci-fi for girls and a little more Justin Bieber. And making it clear it’s not the 80s anymore (in case the updated gadgets and flatter hair don’t do the trick), there’s the film version of Jerrica’s loving, widowed mother. Mrs. Benton is played by Molly Ringwald, herself a product of 80s pop culture fame. Continue onward for a breakdown of all the ways Jem of yore differs from live action Jem, from the machines to the villains to, perhaps most important of all, the style, i.e., how our group Halloween costumes should be updated. After Jerrica’s dad dies, she runs into trouble dealing with her legacy and various mean adults, but a pair of mysterious earrings give rise to a spandex-clad lady hologram who leads her and her friends to drive their van through a wall, which turns out to be fake, hiding a giant, multi-colored talking machine named Synergy, which Jerrica’s dad invented before he died. It can cast a hologram onto any person and turn them into a rock star, complete with musical abilities, a dope set of stage clothes, and a Rolls Royce-type car dubbed the Rock ’n Roadster (this unfortunately did not make the cut in the film version). Synergy can also be summoned in distress, through the magic red star earrings Jerrica always wears, to cast other useful holograms.

Small and sparkly, with little flapping round ears, the film version of Synergy is the result of a droid from Star Wars mating with a LiteBrite. Now he/she/it was also invented by Jerrica’s late father, intended to be found when the time is right. The girls discover Synergy after Jerrica’s star is already on the rise, and he/she/it doesn’t talk, but balances on one wheel and communicates via cute beeps and projections not of holograms, but moral lessons, veiled in the form of old family videos of Jerrica, her dad, and her friends and bandmates.

Cartoon Jem gets on the path to stardom after Synergy turns her and her BFFs into unrecognizable pop stars and they crash (and win, of course) an ad-hoc battle of the bands staged by Jem’s arch-nemesis and co-CEO of Starlight Music, Eric Raymond. Modern-day Jem, however, makes a music video with her friends without any dubious technological help, and gets herself into the public eye the only respectable way a teen should do so: by putting that video on YouTube, getting a lot of hits, and becoming Internet famous.

Becoming Internet famous, as every 12-year-old knows, leads to a record contract. In the film version, this also leads to Juliette Lewis, who plays an evil record executive, Erica Raymond, subtly bent on leading Jerrica to make disingenous, bad friend decisions for the sake of a solo career (from which the main beneficiary, presumably, would be Erica Raymond). In the cartoon, Jerrica inherits her arch-nemesis along with the record label and foster home from her father, in the form of his co-owner at Starlight Music, Eric Raymond. The flatly evil male Raymond tries to oust Jerrica from her rightful post at the head of Starlight using all kinds of tactics, some misogyinistic, all of them ludicrous (like the aforementioned battle of the bands). Given our choice of enemies, we’ll take Erica over Eric any day. 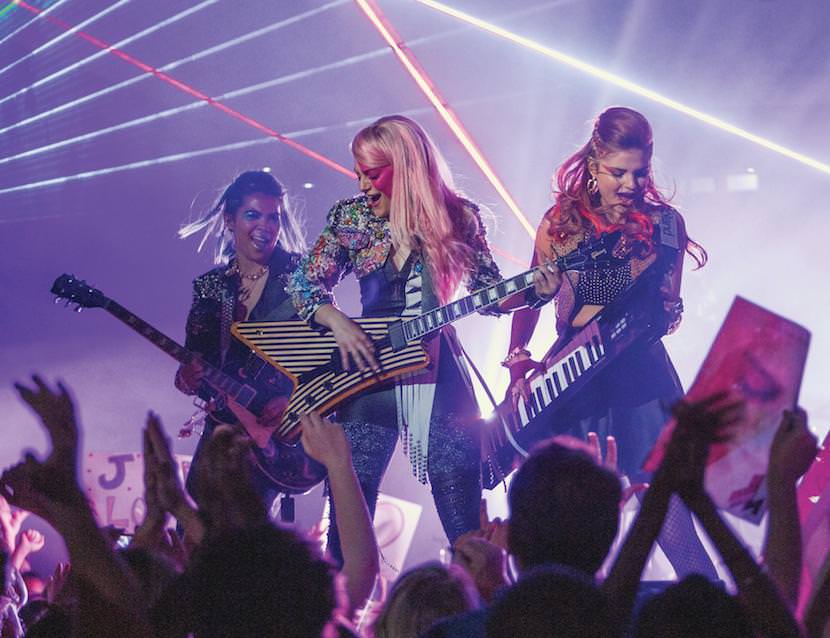 Like the change in villains, the hair has gotten less outsized in 2015. Future Halloween Jem girls, take note, coifs are smaller, straighter (with the exception of bandmate Shana, played by Aurora Perrineau), and most of the layers seem to have gone missing. At least the David Bowie-inspired face paint, colorful clothes, and glitter galore don’t seem to have gone out of style between 1985 and present day.

Given the young-yet-wise-in-years Gen Z/late Millennials audience toward whom the film is geared, the new Jem is sensibly a little younger herself, and more focused on making good choices (after some bad ones) than taking on one-dimensional enemies. Unlike the cartoon, film Jerrica can sing without the help of a machine, and while she’s always wanted to be a pop star, she also wants to do the right thing. Most of cartoon Jem’s problems stemmed from nefarious outside forces, but film Jem finds that sometimes her own worst enemy is herself. In either case, luckily, the girl squad is always ready to back her up when she needs them.

In conclusion: live action Jem represents a (very) youthful, pop version of female empowerment as much as quirky cartoon 80s Jem. However, the Gen-Zers and older Millennials who loved the original show, ironically or not, might be disappointed in the updated version. But this isn’t for them. The new Jem is a role model a young girl could actually look up to, and, she and her friends still pass the Bechdel test — she’s just doing it for the girls of Generation Z.

TAGSFront of Book Jem and the Holograms Trailer Universal Pictures