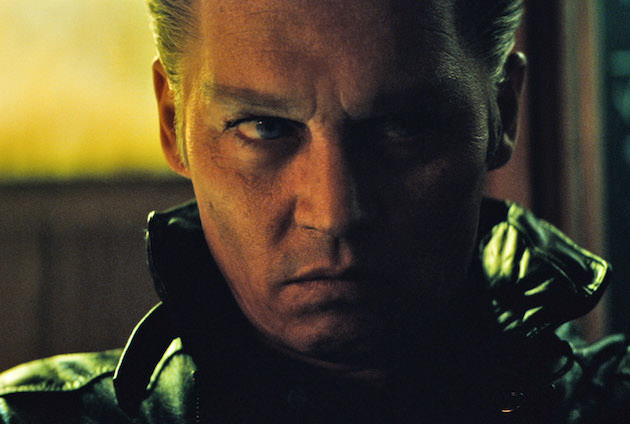 What are the signs that we’re shifting out of sluggish summer into tweedy autumn? Changing leaves, cool nights and, of course, early Oscar forecasting. Coming straight out of the festival circuit two films—Black Mass and Spotlight—are attracting awards chatter that’s threatening to reach a roar. And both films happen to be set and tell distinctly Boston true stories. First, there’s Scott Cooper’s Black Mass, in theaters on 9/18, which tells the story of Whitey Bulger—hands down the city’s most notorious criminal starring Johnny Depp, Joel Edgerton, and Benedict Cumberbatch.

Then there’s Spotlight, in theaters 11/6, starring Michael Keaton, Rachel McAdams, and Mark Ruffalo, which chronicles how The Boston Globe uncovered the cover-up of child molestation in the local Catholic Archdiocese.

But these are not the first films to use one of our oldest cities as the perfect backdrop. Here are some of our favorite Boston movies:

Based on George V. Higgins great crime novel of the same name, small time hood Eddie Coyle (Robert Mitchum) is in a bind: he’s looking at a long stretch of prison time unless he does the unthinkable: snitch on his friends and avoid jail. Director Peter Yates kept production local, shooting in blue-collar Boston neighborhoods such as Quincy, Sharon, Somerville and Dedham. Mitchum, who infuses his character with his typical leading man charisma and charm, reportedly tried to meet Whitey Bulger as research for the role—something that Higgins advised against. The actor instead met with Howie Winter, a member of Bulger’s Winter Hill Gang. It is thought he was introduced through co-star Alex Rocco, a Somerville native, who grew up on the periphery of the gang and is perhaps better known as Moe Green from The Godfather.

Native son Ben Affleck further flexed his directorial muscle with his second feature, this taut, intense thriller. Affleck plays Doug MacRay, born and raised in the neighborhood of Charlestown—a place we’re told contains more bank robbers than anywhere else in the country. Doug follows along in the family business as a second generation thief. But when he and his crew—including Jeremy Renner, who was nominated for an Oscar for his jittery, unpredictable portrayal—take a bank manager hostage (Rebecca Hall) and Doug eventually falls for her, we’re off on a wild, heart-stopping ride. The film makes careful and knowing note of the tensions and uneasiness between Boston’s various citizens and listening to the array of accents is almost worth the price of admission.The film didn’t need to prove its Boston bona fides, yet it went ahead and held its premiere inside Fenway Park.

Sidney Lumet directs from a screenplay written by David Mamet and the leading man is Paul Nemwan—how could this suspenseful drama lose? Newman plays a down on his luck washed up lawyer named Frank Gavin who is stirred into redemptive and heroic action after being moved by the plight of a victim injured during childbirth. He rejects a settlement from a major Roman Catholic hospital in Boston, and becomes the David to the Church/hospital’s Goliath in court. Nominated for five Academy Awards, it is surely one of the greatest courtroom dramas around and many consider Newman’s performance as one of the finest in his career. Bonus: You can spy Bruce Willis who has an uncredited appearance in the film as an extra.

Consider this remake of Hong Kong’s 2002 cult favorite, Infernal Affairs as Black Mass 1.0—when screenwriter William Monahan adapted this screenplay he loosely based Irish mob leader Frank Costello (Jack Nicholson) on Whitey Bulger. In the film Costello places Colin (Matt Damon) as a mole within the Massachusetts State Police, while the police’s undercover unit maneuvers William Costigan (Leonardo DiCaprio), to infiltrate the gang. What happens next is a cat and mouse game taken to heart-in-throat highs as each side desperately tries to find out the identity of the respective double agent. The film won four Academy Awards including best picture and earned Martin Scorcese his first ever Oscar after losing six times previously.

Ben Affleck’s directorial debut signaled the arrival of a sensitive, subtle director who can coax fine performances from his actors and thrives in his native town of Boston. This film stars his younger brother Casey as private investigator Patrick Kenzi who, along with his partner/girlfriend Angie Gannaro (Michelle Monaghan), are hired to find a missing child from Dorchester. Through the twists and turns of this morally ambiguous drama based on Dennis Lehane’s novel, Casey Affleck, Monaghan, Ed Harris, Morgan Freeman and an excellent Amy Ryan (who was nominated for an Academy Award), turn in nuanced and believable gritty performances.

Nobody saw The Fighter coming. It had been six years since writer/director David O. Russell’s last film, I Heart Huckabees met with a mixed reception. This lean gripping film snuck into theaters and blew audiences and critics away with its stark portrayal of Micky Ward (Mark Wahlberg) and Dicky Eklund (Christian Bale). The acting in the film earned Christian Bale and Melissa Leo best acting trophies and a nomination for Amy Adams. But Russell’s casting of real small-town Boston locals in key roles, such as the Greek chorus of women who play Wahlberg’s siblings (and included Conan O’Brien’s real life sister,  gave the film an extra layer of authenticity that got the thumbs up from real Lowell residents.

Sean Penn and Tim Robbins both won Oscars in this Clint Eastwood-directed drama based on the Dennis Lehane novel, about childhood scars and adult revenge. Jimmy (Penn), a former convict, has a beloved daughter who’s mysteriously murdered. In his quest to find out what happened, memories of an early life event that happened to him and his two boyhood friends (played by Kevin Bacon and Tim Robbins) is dredged up.