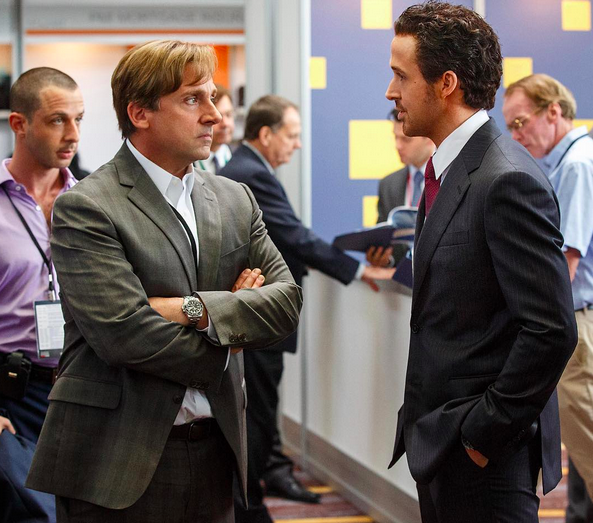 The dark knight is coming back… whoa, not Batman (this time), the dark knight of financial scandal – Christian Bale. Bale has jetted forward in time from the ABSCAM financial sting of the late 1970s/early 1980s in American Hustle to the global banking crash of the late 2000s in Paramount’s The Big Short.

The Big Short is based on New York Times non-fiction best-seller “The Big Short – Inside the Doomsday Machine” by author Michael Lewis (the author of "The Blind Side," and "Moneyball" to name a few) about the housing crisis and credit bubble that we are still recovering from today. It is the true story of a group of bond and real estate brokers who saw the coming crisis of 2008 and, by betting against the market, were able to get rich from the crash.

The trailer starts off in 2005 with Michael Burry (Bale), a neurology resident who studied financial investments as a hobby (note the math t-shirt) calling into question the underpinnings of the U.S. housing market. He convinces some of the biggest money managers and traders in the business, depicted by Brad Pitt, Steve Carrell and Ryan Gosling, to bet against the big banks and the American economy. This is a story about bank greed and how a group of investors figured out how to “profit off of their stupidity… so unbelievable it is true.” Coming from a top-notch journalist in Michael Lewis, starring the aforementioned bold faced names, and directed by comedy guru Adam McKay, The Big Short has recently had its premiere date moved into 2015, Paramount no doubt eyeing a potential Oscar run for a film that looks like a very good bet.