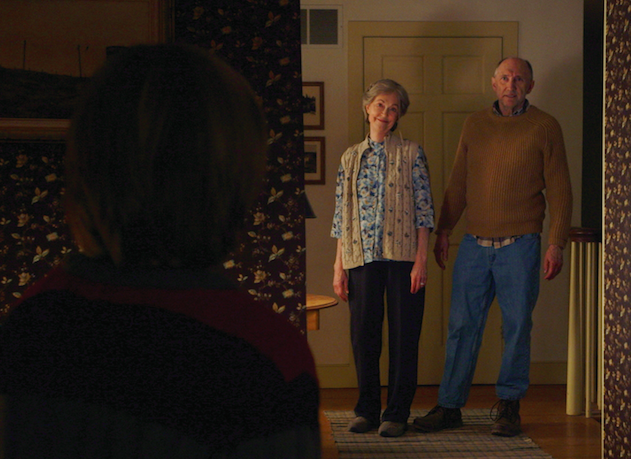 With M. Night Shayamalan’s The Visit opening today, his take on creepy, murderous grandparents terrifying the grandkids, we thought to take a look at movies that explore the most horrifying horror of all: family horror.

Do husbands really have to try so hard to make their wives go nuts? In Gaslight they do. Gaslight (1940 British version, dir. Thorold Dickinson; 1944 American version, dir. George Cukor) is the granddaddy of psychological abuse stories centering on a husband trying to make his wife go insane, hence the term “gaslighting.” What started as a 1938 British play Angel Street; the Broadway premiere in 1941 featured none other than Vincent Price in the lead role. The British film version is considered superior to the more popular Hollywood version with Ingrid Bergman. Don’t worry Paula, we see the gaslights dimming too. 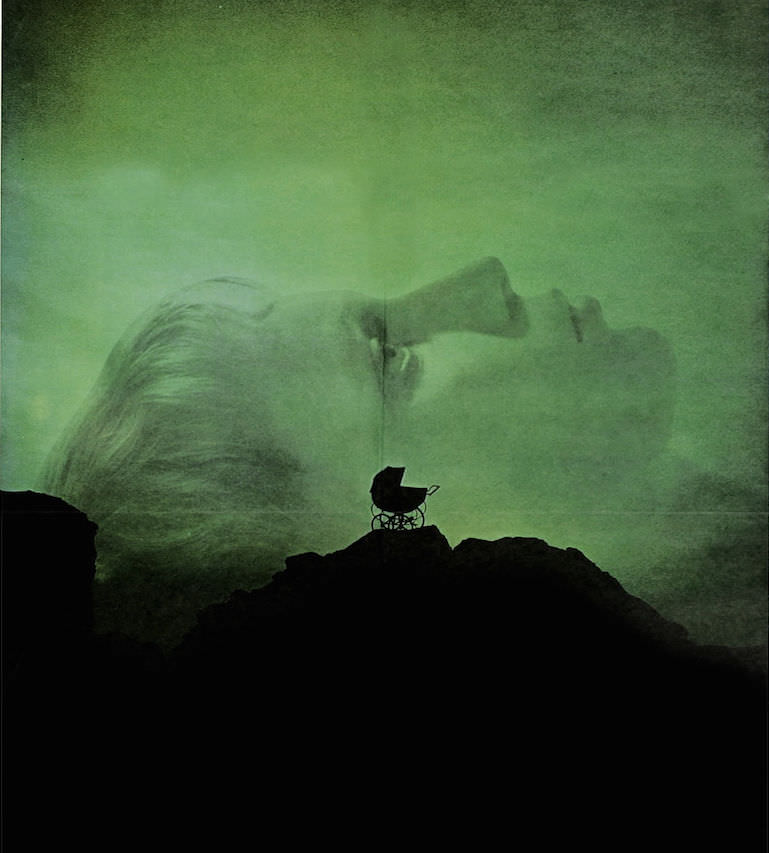 In Rosemary’s Baby (1968), poor pregnant Rosemary (Mia Farrow) does seem to be losing it, and husband Guy (John Cassavetes) appears to be no help. In director Roman Polanski’s horror classic (and first American film), the hubby gets the last laugh. Do dads just want to be left alone with their disturbing thoughts?

Leave it to director Stanley Kubrick to take Stephen King’s haunted horror-fest The Shining (1980), and pare it down to the primal human horror – a failed husband and father losing his mind and trying to murder his family with an axe. Jack Nicholson’s portrayal of Jack Torrance is a classic. No less great are Shelly Duvall and Danny Lloyd as Jack’s loving, intended victims. 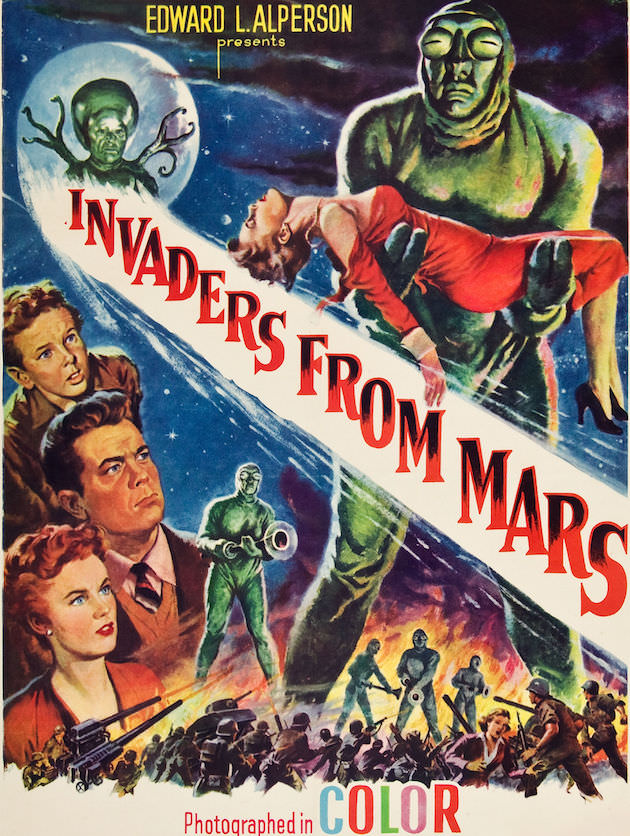 Young David MacLean witnesses an alien spaceship crash into the field behind his all American house in Invaders From Mars (1953). When nice daddy goes to check it out, he comes back later sullen and mean, and David sees an ugly red puncture mark on the back of his neck. Soon most all the townsfolk have become distant and hostile. What has happened to David’s sweet family and his little town? This low budget classic was directed by William Cameron Menzies, Hollywood’s greatest production designer (check out his credits). Menzies had Invaders shot on Eastman color negative but printed for distribution using the two-color process Cinecolor, giving the picture a striking, vivid look. You’ll never look at the back of somebody’s neck the same way again. Director Tobe Hooper’s 1986 remake is a classic in its own right. 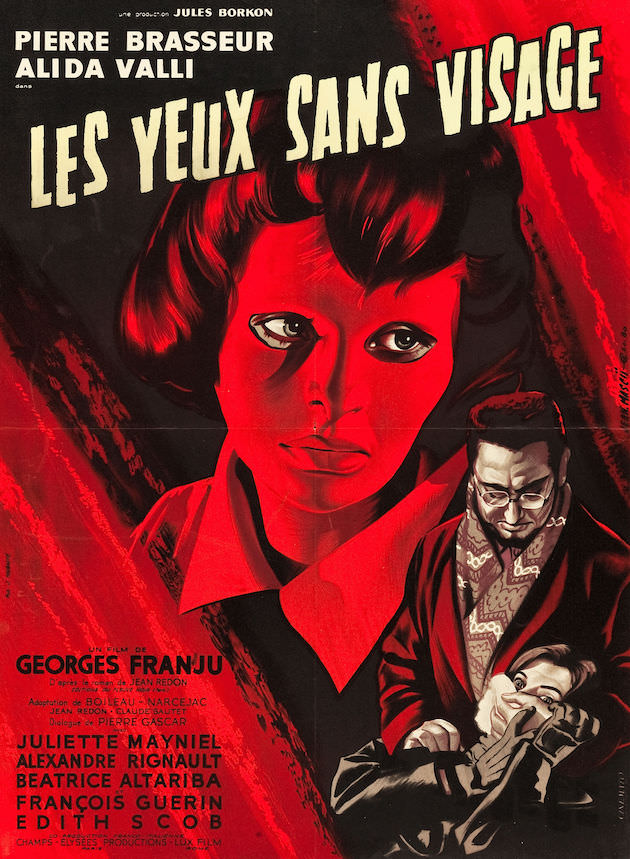 In the French classic Eyes Without A Face (1960), directed by Georges Franju, an obsessed scientist repeatedly tries to repair the burn-damaged face of his daughter, the result of a car crash he was responsible for. Where does he get the skin to graft onto his lovely daughter’s face? And how does she feel about it? The great Spanish director Pedro Almodovar created his own surreal take on this situation in his movie The Skin I Live In (2011), starring Antonio Banderas.

In Scream Of Fear (1960), from the Hammer House Of Horror (look it up), a paralyzed Susan Strasberg returns to her English country home after her father disappears. Only trouble for her: she keeps seeing his corpse throughout the house and grounds, but no one believes her. Is she a victim of gaslighting? Director Seth Holt’s chiller is not one to watch alone, or at night, and definitely not if you are alone at night.

Calling director David Lynch the modern master of surreal horror might seem to indicate we’re pegging him as a genre director, when he is in fact one of the greatest directors working today, and his films are sui generis. His first film, Eraserhead (1977), about a shy young man locked in his dreams and fantasies, can be a bit of a surreal puzzler on first viewing. If you are a new parent, however, it will probably strike you as reality television. His feature film prequel to his cult classic early 90’s TV series Twin Peaks, titled Twin Peaks: Fire Walk With Me (1992), is a terrifying exposé of father-daughter relationships, and just plain terrifying. Definitely do not watch alone at night.

Women in average horror films are usually victims, gruesomely murdered for engaging in sexy behavior and for having sex. The exceptions are the exceptional horror films. 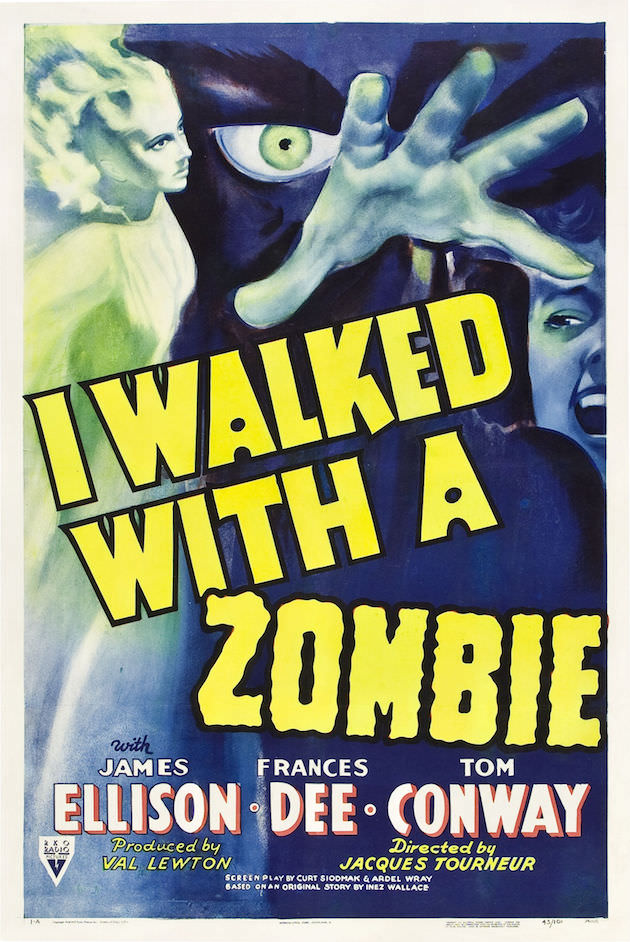 In Jacques Tourneur’s I Walked With A Zombie (1943), a Canadian nurse lands in the Caribbean to care for a sugar plantation owner’s somnambulant wife, who suffered her condition after trying to runaway with her husband’s alcoholic half-brother. Soon the nurse comes to think the woman is the victim of the island’s voodoo, but the rational matriarch of the family dismisses it. Or does she? Mama, what’s going on in that head of yours?

The same could be asked of Mrs. Bates in Alfred Hitchcock’s Psycho (1960), but most already know the answer. Don’t just watch it for the shower sequence, but for the mastery of the whole conception. 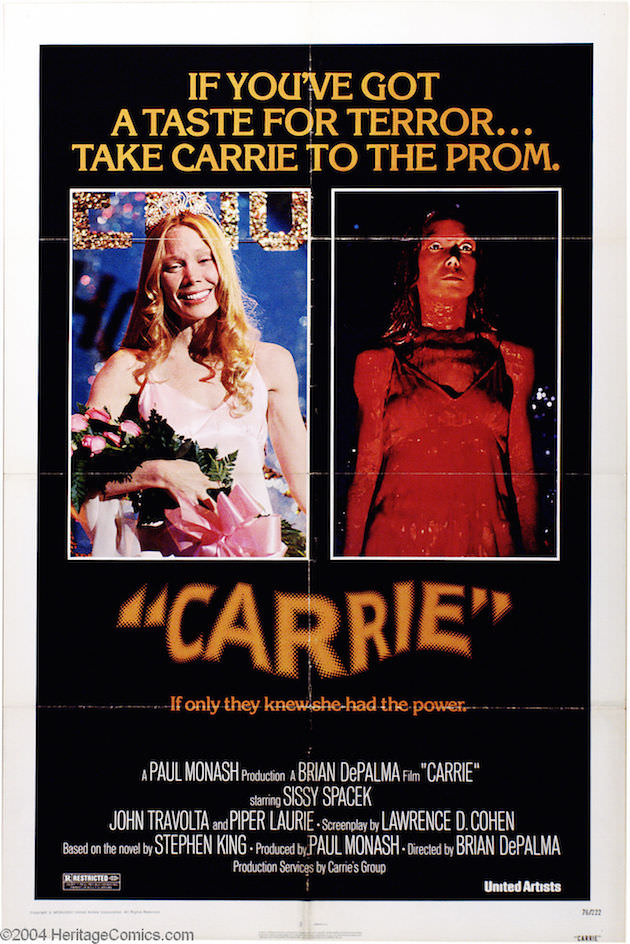 In 1979 body horror maestro David Cronenberg wrote and directed The Brood, a no doubt personal project for him, and what he only half-jokingly called his version of 70’s middlebrow divorce classic Kramer vs. Kramer. Just knowing that actor Oliver Reed comes between the estranged couple played by Samantha Eggar and Art Hindle is horror enough. 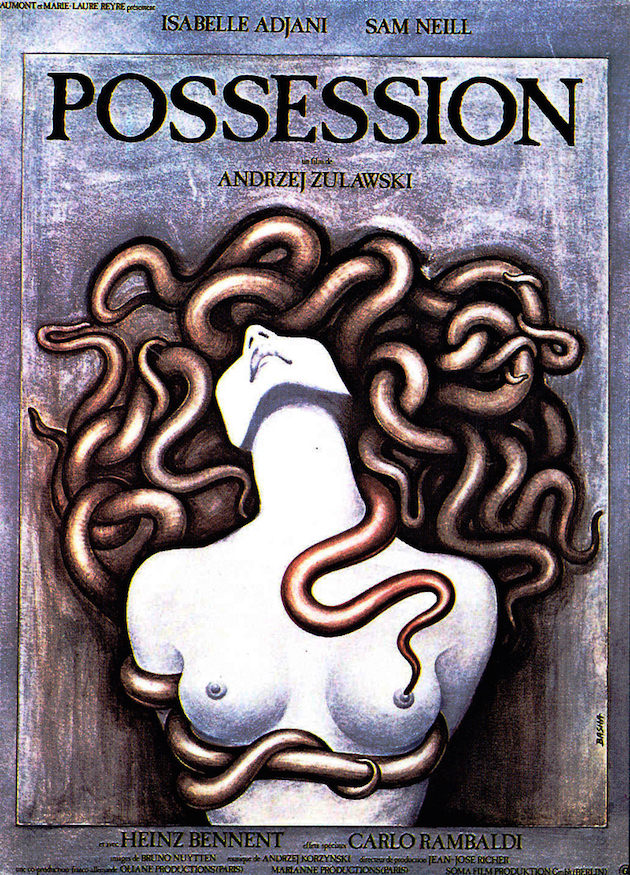 Nicole Kidman plays way against type in The Others (2001), living with her children in a big, empty, haunted, house at the end of WWII, and all of them are seeing some disturbing things. But which side of the house are they on? Terrifying visions haunt the young widow and her son The Babadook (2014). Soon mom’s acting like she wants to go it alone without her house, her son, and their dog. It’s a very grown up version of Pixar’s Monsters.

There are crazy kids slashing their way throughout most all the films listed here, these are just some standouts.

In William Friedkin’s The Exorcist (1973), Linda Blair’s portrayal of the demonically possessed Regan, the initially sweet 12 year-old daughter of Ellen Burstyn’s Chris MacNeil, is an astonishing feat of acting even without all the special effects. 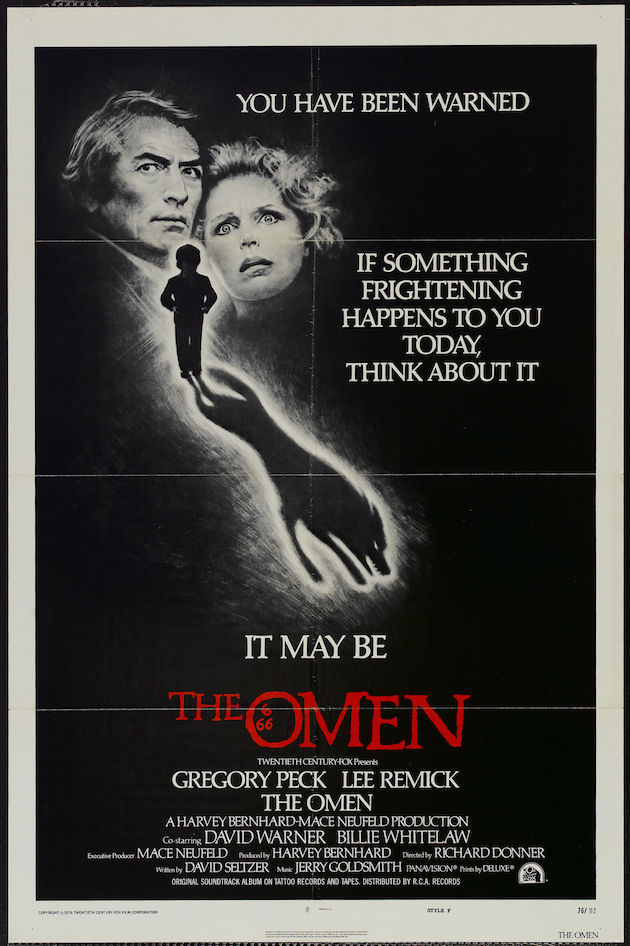 Harvey Spencer Stephens also does a fine job of scaring the hell out you in The Omen (1976), playing Damien, the Antichrist. Even though seven year-old Heather O’Rourke played the innocent victim in Tobe Hooper’s Poltergeist (1982) – being carried off by the haunted house spirits to the Purgatory lurking in her TV set – she still seems a little strange even before she’s taken.

So does the little Russian girl in Orphan (2009), who’s adopted by a young American couple with two existing children and marriage strains (wife/mother is a recovering alcoholic, and has just had a stillborn). It doesn’t take long for the two kids to figure out the new girl is whack, but it takes the parents longer, naturally.

In You’re Next (2011), three assailants wearing fox, lamb, and tiger masks are gruesomely killing off, one by one, an extended family within their large Missouri vacation home, seemingly for no reason. Except there is one, and it isn’t pretty. 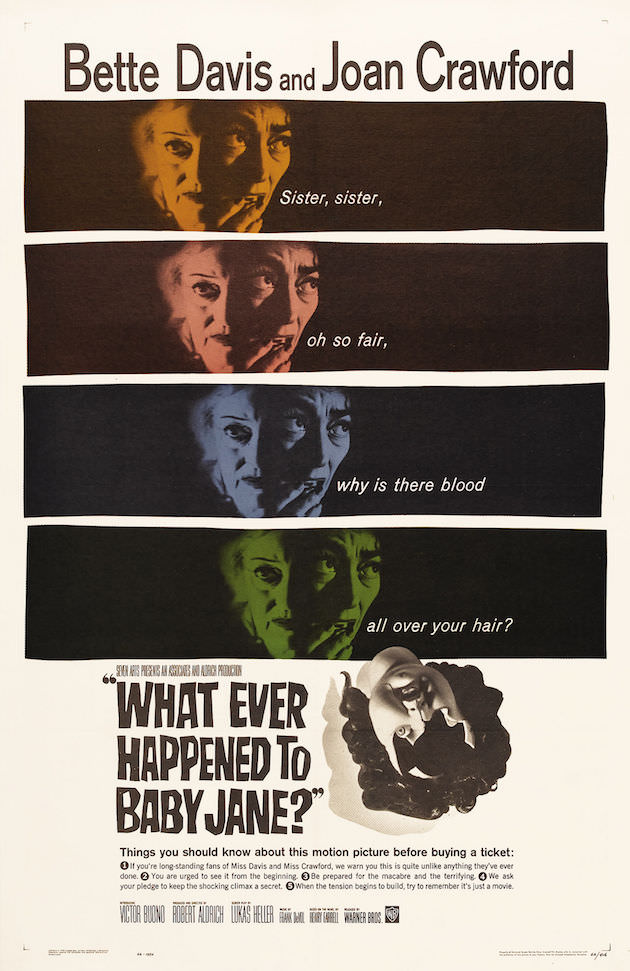 In Robert Aldrich’s What Ever Happened To Baby Jane? (1962), Bette Davis and Joan Crawford, two actresses from Hollywood’s Golden Age, who despised each other in real life, got together in this picture as over the hill Hollywood hag sisters, and let it rip. Classic camp, but given Aldrich’s sterling direction, the pathos of the characters frequently subdue the camp.

There is nothing camp about David Cronenberg’s Dead Ringers (1989), with Jeremy Irons playing identical twins who are gynecologists in practice together, and who’s seduction of one of their patients, the lovely Genevieve Bujold, eventually backfires on them. Brilliant and unpleasant as only a Cronenberg movie can be.