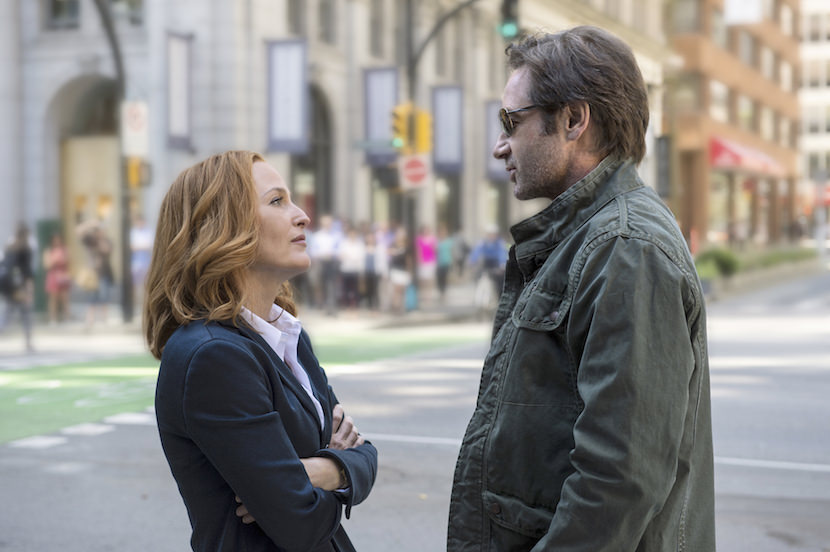 The first 24-seconds of the trailer begins with a man’s voice in a low staccato rhythm, “It will probably start on a Friday. What will seem like an attack on America by terrorists or Russia, driven by a well oiled, well armed and multinational group of elites, using alien technology the government’s been hiding for seventy years.” If we heard nothing else but this, punctuated by a single base note, we could guess which dynamic duo is returning after an almost fourteen year absence – Mulder and Scully.

During Gotham and Minority Report, on Monday night FOX debuted, in two parts, the first official trailer for The X-Files revival six-episode event series. Yesterday we had something even greater to celebrate – the release of both parts together in a 2-minute video.

In July we posted the 40-second promo, which teased the return of one of television’s favorite pairings, complete with the haunting X-Files theme. Fox also revealed that they were going to give us an opportunity to refresh our memories (or watch for the very first time) the original nine season with “201 Day of ‘The X-Files.’”

Creator/Executive Producer Chris Carter has picked right up where he left off in creating that familiar tension between our favorite proprietors of paranormal phenomenon – as Mulder says, “I can’t do this alone.” In this first case, Mulder entreats Scully, “They police us and spy on us; tell us that makes us safer. We’ve never been in more danger.” WHO? The trailer does not provide us with many clues, other than a flash to a scene where men in military fatigues encounter something otherworldly. We're safely, freakily in X-Files land here.

The trailer includes some familiar faces, including Mitch Pileggi as their long time boss, FBI Assistant Director Walter Skinner. Additionally, no face is needed to recognize the cigarette wielding hand of Mulder and Scully's ultimate nemesis, shown at the end of the video.

The X-Files will premiere on January 24, 2016, following the NFC Championship Game. The second episode will appear the next day in its regular Monday time slot.