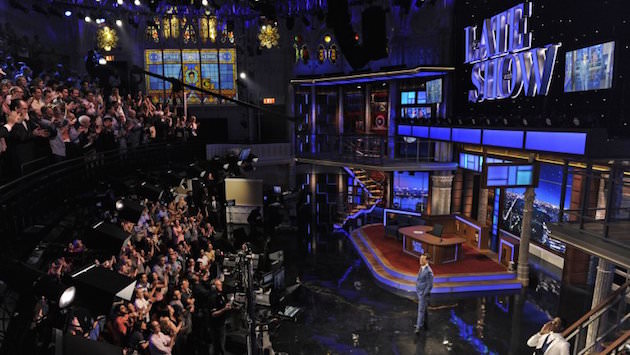 The Late Show With Stephen Colbert started with a bit of The Colbert Report patriotic absurdity—there was our host, joining Americans from all over the country in a duet of “The Star Spangled Banner,” from bowling alleys to mechanic shops to baseball fields—ending with an umpire yelling “play ball!” The umpire? Watch and see who it is:

Thus begun Stephen Colbert’s reign as the host of the The Late Show, an appropriately odd, fun, video montage, which was followed by a great a lively bit of dancing with band leader Jon Batiste, the whole thing was bubbling over with genuine enthusiasm, excitement, and energy. And oh man, that miniaturized opening credits sequence! The awesome theme song by Jon Batiste and Stay Human!

“Hello nation,” were his first official words, another call back to his Colbert Report days. Here's his monologue, the opening credits and the theme song,

And honestly, how many late night hosts would not only have a "cursed amulet" on their stage, but offer it it's own comedy bit at the very start of their very first show? This is the kind of weirdness one can only hope, and trust, Colbert will never let go of. And frankly, he's the only late night host who could pull this kind of bit off with such a committed performance. And that's the thing, Colbert really can perform. Once the cursed amulet starts interrupting him, things get insanely silly, yet Colbert never winks at the audience. As he did so well on The Colbert Report, he gives himself over completely to whatever insanity he and his writing team have come up with.

And this was just the first few minutes of the show, before Colbert feasted on all the Donald Trump lunacy he'd missed during his summer off the air, and then first guest George Clooney (typically charming, without a movie to promote…this is why they created clips for his fake movie, Decision Strike), followed by presidential nominee Jeb Bush (staying relentlessly on message), and a musical performance by Batiste and Stay Human in which they covered Sly and the Family Stone’s “Everyday People,” and had the legendary Mavis Staples join them, along with, Derek Trucks, Aloe Blacc, Brittany Howard from Alabama Shakes, and Buddy Guy.

It was a promising start to a new era for The Late Show. Colbert and his team clearly took advantage of their summer's worth of prep.

TAGSCBS Front of Book The Late Show With Stephen Colbert