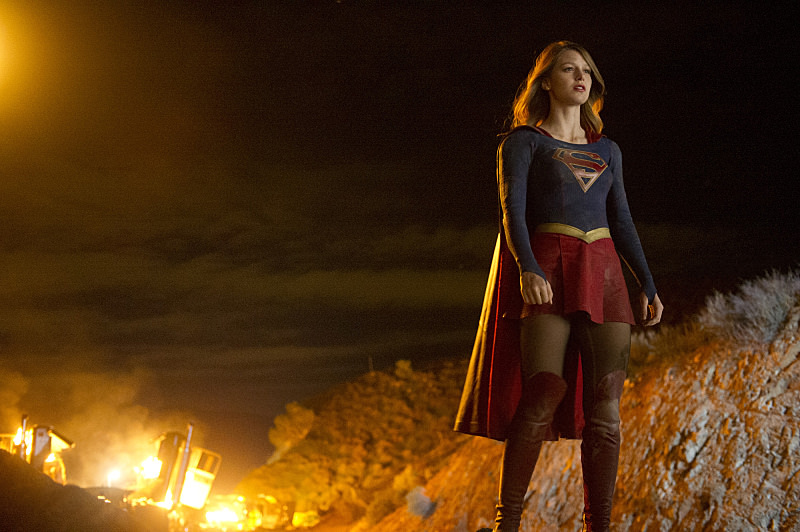 24 year old Kara Zor-El is ready to go toe-to-toe with a host of weird villains in CBS’s Supergirl. New footage released by CBS gives you a peek at some of the baddies Superman’s cousin is going to have to contend with. The show's two big stars are Melissa Benoist as Kara Danvers/Supergirl and Mehcad Brooks as Jimmy Olsen, but also includes a bunch of strong actors including Calista Flockhart, Chyler Leigh, David Harewood, and Jeremy Jordan. Let's take a look at what we know and what this teaser revealed.

Supergirl  first appearance in the comics world was in 1959, in Action Comics #252, alongside her already hugely famous cousin, Superman in "The Supergirl from Krypton!" In it, Clark Kent is alone working at the Daily Planet when he sees a purple rocket in the sky. Changing into his Superman costume, he investigates the crash and finds a young Kryptonian named Kara. They soon discover that they are cousins, and Supergirl begins her slow, often painful process of harnessing her powers while pretending to be a normal girl on Earth.

Starting in 2011, DC gave the character a modern reboot, beginning with "Supergirl #1." In a savvy move, they re-emphasized how Supergirl is the ultimate outsider, and although she shares Superman's powers, she shares "none of his affection for the people of Earth."

What are her powers?

Who are the villains she'll be facing in the show?

Here are the assorted villains that will be testing Supergirl in season one that we could make it out in this kinetic teaser:

0:35: We're not sure exactly who this disgusting villain is, but kudos to CBS for making one of Supergirl's foes this hideous. How many sets of teeth do you count there?

0:38: This looks like a cyborg of some kind to us, which means it's likely that this is Justice League member Red Tornado, who has been described in the official casting description as "the most advanced android the world has ever seen…he seen becomes sentient, posing a grave danger to National City."

0:43: This leaping villain lands atop this moving truck in a pose that’s undeniably Spiderman-like.

0:45: A bad guy with super speed is also a major pain in the ass. Might this be a villain from Krypton, where super speed seems to be the norm?

0:49: Laser hands fight! A little like Yoda versus Darth Sidious…

Kara Zor-El will be bursting into homes on October 26.