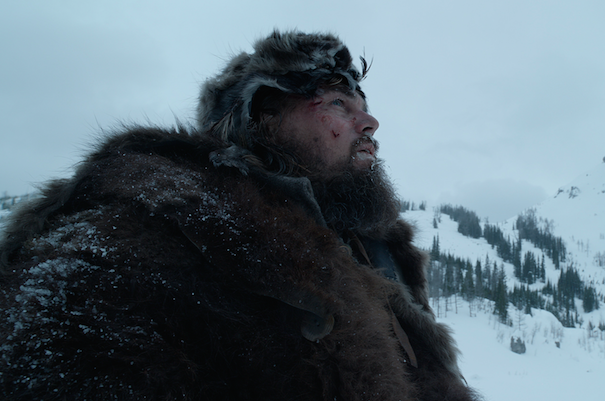 New Photos of Leonardo DiCaprio and Tom Hardy in The Revenant

As we wrote back in July, there is just a ton of reasons to be very, very excited for The Revenant. The film's director, Alejandro González Iñárritu, and cinematographer, Emmanuel Lubezki (we've interviewed both, you can read our chat with Iñárritu here, and and Lubezki here), both took home Academy Awards last year for their work on Birdman (which also won Best Picture and Best Original Screenplay). Now they've teamed with  Leonardo DiCaprio and Tom Hardy as two bearded and bedraggled 19th century frontiersmen in a tale of revenge. The trailer lets you know immediately that you're in the hands of master craftsmen.

The film has garnered more press as of late for the talk of how hard it was to shoot. From Lubezki wanting to use only natural light to the harsh conditions of the various locations (they filmed in sub-zero temperatures, from Canada to the snowy mountains of Argentina), to a moment in which vegetarian star Leonardo DiCaprio had to eat a bison's liver as his character struggles to survive (he vomited after). Yet despite all the talk of the roughness of the shoot, the amount of talent involved is leading many people to believe that this will be a major player come awards season, and no serious film lover will miss seeing some of the very best in the business ply their trade to a story of revenge and survival.

Today, Yahoo! Movies released these new photos from the set—they're a doozy.  The photo of Leo's Hugh Glass standing before a pile of 10,000 bison skulls is both monstrous and gorgeous. We can't wait for this film.