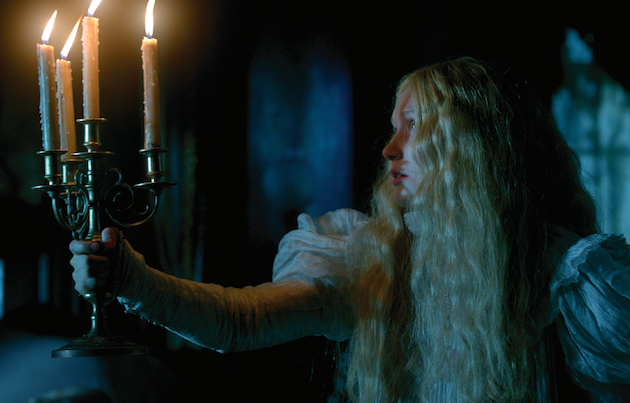 One of the most creative directors alive, and a horror master to boot, Guillermo del Toro (Pan’s Labyrinth, Hellboy, Pacific Rim), has teamed with a stellar cast (Jessica Chastain, Tom Hiddleston, Mia Wasikowska) for his haunted house film Crimson Peak. Legendary and Universal Pictures have released this new clip, via Yahoo! Movies, introducing us the Sharpe family (Chastain plays Lady Lucille Sharpe, Hiddleston is her brother, Sir Thomas Sharpe) in the aftermath of a family tragedy.

Crimson Peak is a proper haunted house film—directed by a visionary, the Sharpe house, as Sir Thomas tells his young bride, Edith (Wasikowska), is so old it’s become a “living thing.” Wasikowska’s the perfect actress to play the seeking, terrified Edith, learning the house’s dark secrets as she encounters one phantasm after another. And Chastain looks to be having fun as the chilly, not altogether trust worthy Lucille. And then there’s Del Toro, who proved with Pan's Labyrinth that he can write and direct terrifying, beautiful, and emotionally walloping films when left to his own devices. Getting to use his many gifts in teasing out the thrills of this very creepy house, one imagines the Mexican auteur had a bast making this relatively small budget creeper. Hell, none other than Stephen King said the film is “_______-ing terrifying.”

Here’s the most recent clip, and below that we’ve provided the full trailer. Opening before two Friday's before Halloween on October 16, horror fans, put Crimson Peak on your must-see list.