The Internet is abuzz with speculation this morning that a new trailer for Star Wars: The Force Awakens will be coming next week, while The Force Awakens global toy unboxing live stream event is happening now. If you’re looking for more concrete Star Wars info, however, the Associated Press’s Jake Coyle nabbed an interview with Star Wars: The Force Awakens director J.J. Abrams recently, asking the 49-year old auteur what it was like stepping into the monumental task of taking on the most beloved film franchise of all time. We recommend you read the entire interview here. We’ve pulled our favorite quotes below:

On what life might be like in a galaxy far, far away, some 40 years after Episode VI

Having already rebooted the Star Trek franchise, Abrams was planning on focusing on original material when Kathleen Kennedy, president of Lucasfilm, came calling.

“She and I were talking about what this world would be, this universe, nearly 40 years after Episode Six and the idea that these characters would have lived on. And yet there would have been this new generation that may not know at all who these characters were, or had hear of them but not necessarily believed that they were real. It felt like such fertile ground.”

To that end, Abrams brought back familiar faces, like Harrison Ford, Carrie Fischer, Mark Hamill and Peter Mayhew as Chewbacca and threaded them through a story filled with new faces, including John Boyega as Finn, Daisy Ridley as Rey, and Adam Driver as Kylo Ren.

On pushing past being a fan to remain the director

“That was a constant in the production of the movie: moments where we would all look around and realize what we were doing and gasp a little bit and then dive back in,” Abrams told the AP. “When you’re on the set of the Millennium Falcon or staring into the eyes of C3P0 giving direction, it’s pretty easy to have that fanatic part of you bubble up. But our job was to be there to tell this story, not to be a fanboy.”

On the practical versus the computer generated

Much as been made of Abrams’ desire to use as many practical effects as possible. Just look at the loving attention paid to the creation of new droid BB-8 for an example. Abrams’ merged all the tools at his disposable (abilities that George Lucas, making the first Star Wars back in the late 70s, would have found astonishing) with old-school effects.

“I can’t think of something that we did that doesn’t look and feel more authentic that I wish we had done differently,”  he said. “Wherever possible, whenever possible, we tried to do things as much in camera as we could. And that meant a lot of artists on that side of things were building things not with pixels but with wood and paint and foam and actually constructing sets that we could have done in post. It gave the actors the actual location, the actual sunlight or stage light to bounce off of, and the movie a feeling of being in an actual location and not in an artificial one.” 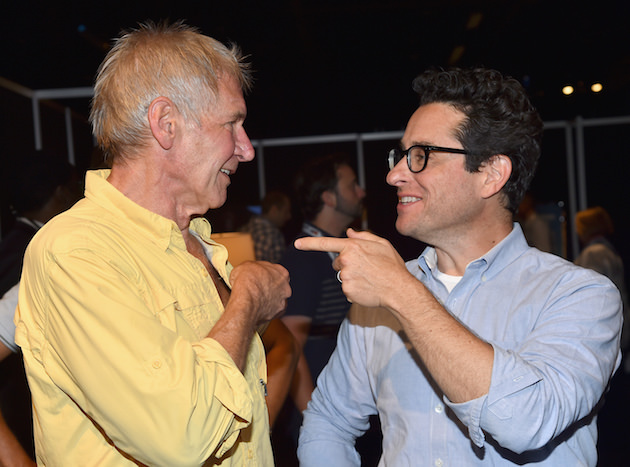 On seeing Ford, Hamill and Fischer back together again

“What was incredible from my point of view was how apparently easily they flipped back into these roles. I knew, for a fact, that Harrison was going to be in this movie, but I couldn’t be certain that Han Solo would be. Meaning, I hadn’t seen Han Solo return after nearly 40 years, either. And it wasn’t until we got on set that I got my answer. It was a remarkable thing to see how effortlessly Harrison Ford became Han Solo again.”