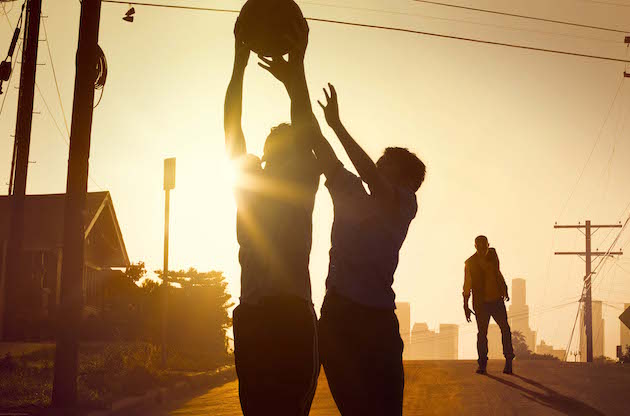 Warnings – if you are squeamish and scared of zombies, cover your eyes and peek between your fingers.

AMC has just released the first three minutes of the companion series to its' hit show The Walking Dead, the first taste of the Fear the Walking Dead is going down well. Fear the Walking debuts this Sunday, and from what can make out its' first three minutes, fans will be pleasantly surprised by a healthy dose of not only suspense and gore, but actual human feeling. The early reviews have begun to surface, and they're almost wholly positive.

Fear of the Walking Dead seems to be set a few weeks before the original series began (when Sheriff Rick Grimes woke from a coma in a hospital gone to seed, and walker), and is based on “The Walking Dead” comic book series by Robert Kirkman, Tony Moore, and Charlie Adlard.  This new series, created by Kirkman and showrunner David Erickson, is set in Los Angeles and follows the travails of high school guidance counselor Madison Clark (Kim Dicksens), her fiancé Travis Manawa (Cliff Curtis), and her two children, Nick (Frank Dillane) and Alicia (Alycia Debnam-Carey) as they face the very start to the zombie apocalypse (although in this world, nobody has ever heard of a zombie and therefore never uses the term) that forebodes the collapse of civilization and leads us to the hellscape of "walkers" and brutal survivors (Rick Grimes, et al.) that make up the The Walking Dead.

The first season of the show will only have six episodes (same as The Walking Dead). The second season is contracted for 15 episodes and is scheduled for 2016. Our guess is AMC will be taking another huge bite out of the coveted 18-34 demographic again.