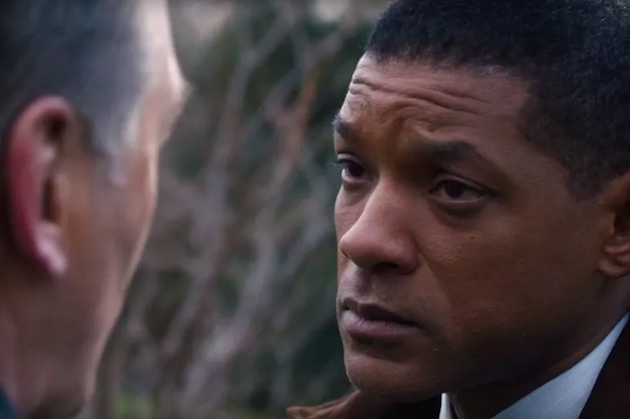 As millions of fans get psyched up for the start of the 2015 NFL season, the sport’s brutality, and its subsequent, lasting effect on the players, is a fact that is becoming increasingly harder to ignore. And now comes writer/director Peter Landesman’s film Concussion, starring Will Smith’s as the real life forensic neuropathologist Bennet Omalu, who made the first discovery of CTE, a football-related brain trauma, and his battle against the NFL, which just released its new trailer.

“Repetitive head trauma chokes the brain,” Smith’s Omalu says in the trailer. His discovery of CTE was made possible thanks to two horrible incidents—the suicides of former NFL pros Dave Duerson and Andre Waters. “The NFL doesn’t want to talk to you…you turned on the lights and gave their biggest bogeyman a name,” says Alec Baldwin’s Dr. Julien Bailes, correctly gauging how hostile the monolithic NFL, a multi-billion dollar business, will be towards Omalu’s discovery. Perhaps even more aptly put is the comment made by Albert Brooks’ Dr. Cyril Wecht—“You’re going to war with a corporation that owns a day of the week!.”

Will Concussion have the necessary impact to make the NFL take a hard look at the issue, possibly changing a sport that generates billions of dollars of revenue a year? And what changes would be possible to a game that, at its core, is violent, and is played by huge, fast, impossibly strong men? These are tough, but crucial questions, and they’re becoming more impossible to ignore as former players come clean about their post career problems, while others suffer even grimmer fates.