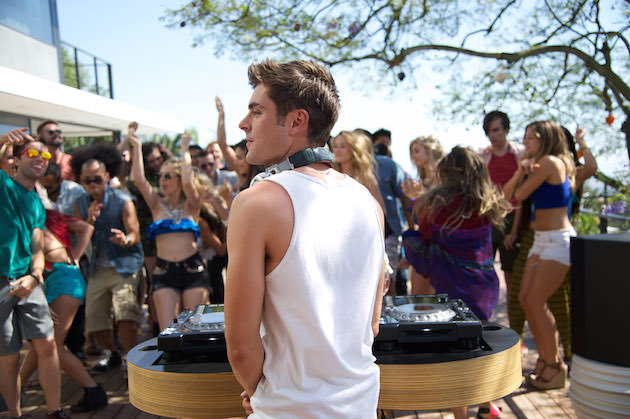 We Are Your Friends & the History of DJs in Film

Inventing the next big app and selling it to Facebook for umpteen billion dollars is so last year. If We Are Your Friends, opening today and starring Zac Efron, is to be believed, contemporary, money-minded millennials would rather make it big throwing the party, rather than get rich in order to get into it. Coming up with the next big EDM hit is the new inventing Instagram for Efron’s Cole Carter, a college student busy DJing parties (with varying success), chasing girls, mostly in the form of his mentor’s girlfriend, played by Emily Ratajkowski, rolling deep, chasing money, and eventually, even sort of growing up. Cole is single-minded in the pursuit of his own 128 bpm one-hit wonder, since one song is all he really needs to financially set him up for the rest of his life.

And who could blame him? Real DJs who’ve made it big keep popping up on the big screen, playing themselves and their hits (while we have yet to see a studio give a summer blockbuster cameo to, say, the creators of Tinder). Can Efron’s spin as a DJ — sorry, had to — stand up to these real-life counterparts? At any rate, if an EDM hit is the new viral app, then a coming-of-age tale about an aspiring DJ pursuing the perfect song is the new and Millennial-approved version of the coming-of-age tale of an aspiring artist/writer/actor struggling to create their own pièce de résistance. Pick your own analogy, really, and onto the DJs…

First off, becoming a DJ is Cole Carter’s raison d’être, because it’s a lesson on which young Cole probably cut his teeth, at least since DJs have started showing up on kids’ movies. Skrillex took time away from playing to sold-out clubs in Vegas a couple years ago to cameo in Wreck-It Ralph — animated, of course, but playing his own hits — no doubt to inculcate kids early to the pleasures of EDM (and to terrify their parents).

Fast forward a few years, and all those kids who enjoyed cartoon-Skrillex in a kids’ movie are probably happily sleep-dancing through Cancun spring break to the soundtrack of Diplo, performing for a brief cameo during a beach party scene in 22 Jump Street:

And a few years after that, if they’ve made it big, they’re in Hollywood, checking out Calvin Harris, as he stars as a meta-version of himself in the Entourage movie, playing a DJ in a film being made within the film, about clubland, which Adrian Grenier’s character Vince is supposed to be directing. (If Efron’s character could somehow be incorporated into the fictional, Vince-directed film, that would be a meeting of epic proportions of Basic Bro-itude. But we digress.)

Far cooler would be Daft Punk’s cameo in Tron Legacy. Besides creating the score for the film, the French musicians appear briefly at the end of the film, manning the decks. Or at least, we’re supposed to assume it’s them in that party scene…their faces will be revealed for no Hollywood studio.

Plus, way back in the day, we have to shout out (sorry, we really can’t stop with these puns) DJ Tricky’s cameo in 5th Element. He might be playing an evil right hand man instead of making music, but surely someone told Efron about the the underground DJ’s brief role in the cult classic while he was researching his latest role. At least the two men share similar swagger, right until things turn sour:

Finally, as Portlandia already forecast in its 2011 second season, everyone’s a DJ now, even your local bank teller. So why not Zac Efron a college student looking to get rich quick?

TAGSFront of Book Lists Warner Bros. Pictures We Are Your Friends