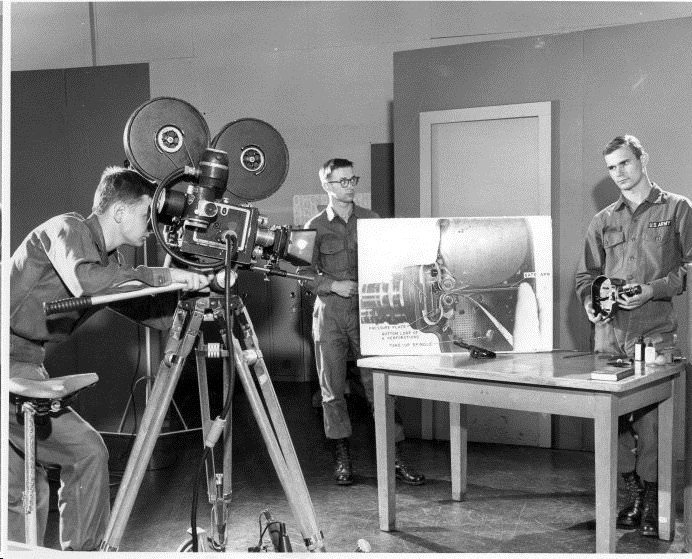 August 15, 2015 marks the 70th anniversary of V-J Day, the day the world found out that Japan had surrendered which, in effect, ended World War II. To commemorate the anniversary, we had the pleasure of speaking with Hal Rosenbluth, President/CEO of Kaufman Astoria Studios, where, along with the Signal Corps Photographic Center (SCPC), all of the Army’s films where shot. Today Kaufman Astoria Studios produces some of the most acclaimed movies and television shows, home to series such as Nurse Jackie, Alpha House, Sesame Street, Orange is the New Black and last year’s Academy Award winning Best Picture – Birdman. As the Los Angeles Times noted of Alejandro G. Iñárritu's Oscar winner, the production crew built an "intricate set of cramped hallways and dressing rooms,” at Kaufman studios for all the backstage scenes in the film.

Yet for many years, Kaufman Astoria Studios was where the United States military relied on some of Hollywood's biggest stars, including Frank Capra, Jimmy Stewart and John Wayne, to make films that recruited and train U.S. soldiers. Capra's Why We Fight became a seminal film series, illuminating for Americans the reason blood and treasure had to be used to fight fascism.

Rosenbluth gave us an incredible “nickel version” of a historical tour of one of the oldest and most fascinating facilities in the film industry, and explained to us how Kaufman Astoria Studios did its part to help the Allies win World War II.

"The Astoria facility was built in 1920 by the Famous Players—Jesse Lasky and Adolf Zukor," Rosenbluth says. "Together, they became Paramount. They came out to Queens and built this as a stage facility to take advantage of the best acting talent. The best acting talent was theater talent, and the best theater talent was Broadway and Vaudeville. So they built most of what we see here today in terms of the stages, and brought in folks like Gloria Swanson, Clark Colbert, and Rudolf Valentino. At this time Paramount was doing silent films; they did a slew of them. In the mid to late 20’s, when talkies came in, Paramount worked with W.C. Fields and the Marks Brothers—they did their first films here. The Marks Brothers were Broadway stars; it was hard to convince them to leave that job and move to LA. The Marks Brothers did Coconuts and Animal Crackers by filming everything during the day and getting back for curtain call at night. In 1929/1930 Zucker went out to the West Coast to run Paramount; from there a lot of these folks like the Marks Brothers followed because, I guess, they probably figured out that fame and fortune was easier on film than it was making eight curtain calls a week. That’s how this process started."

Rosenbluth says that during the 30’s, the studio was run much like it is now—if someone wanted to rent a stage, they rented a stage. That lasted until 1940, when Astoria Studios was taken over by the Army. "In 1942 the facility officially became the Army Pictorial Center—it became a top secret base. We were in World War II and every moving image that the Armed Services saw from 1942 to 1970 was either done here or controlled out of here. When the Army came in, it was a functioning facility. The stages were already built. It was basically a rental house. For the Army, it was probably an easy deal to have made. Somewhere along the line, Western Telegraph and Telephone got hold of it, so there were some changes during the 30’s of who had it that get a little lost in the shuffle of time, but the main focus is that the Army utilized it by 1940 and by 42’ took complete control of it." 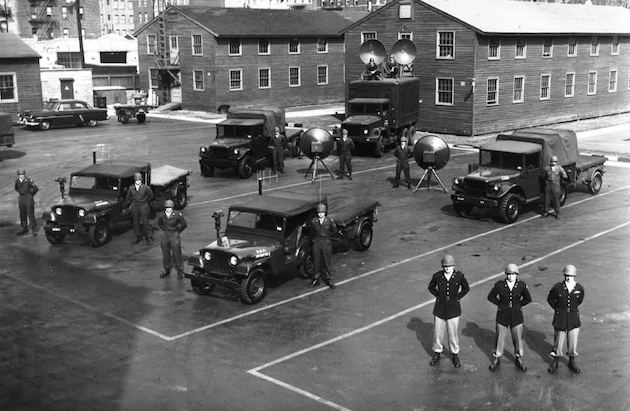 Of the many films made at Kaufman Astoria Studios, perhaps the most influential were a series of seven films made by Frank Capra called Why We Fight.

"We had everything calculated," said Nazi Field Marshal Von Keitel after WWI, "except the speed with which the Allies were able to train their troops … our major miscalculation was in underestimating their quick and complete mastery of film education."

The studio transformed in the months after Pearl Harbor. It filled a major need for the allies, expanding its production capability as it was now required to speed the training of millions of wartime inductees. Basement recording stages were pressed into service during wartime blood drives and medical films became their specialty. The Signal Corps continued to make films, training films and TV series throughout the Korean War and anti-communist years.

The National Archives and Records Administration holds all of the films from Kaufman Astoria Studios during this period. "One of the most interesting among the Signal Corps motion picture records is the series Orientation Films, consisting of 32 documentaries on the war," the Archives write on their website. "The first seven constitute the well-known Why We Fight series, produced by the War Department under the general supervision of Lt. Col. Frank Capra. Prelude to War, The Nazis Strike, Divide and Conquer, Battle of Britain, Battle of Russia, Battle of China, and "War Comes to America, together represent one of the most comprehensive efforts to teach history through film.

Originally created for new recruits, Capra's films were eventually shown to civilian war-workers and the general public. "Capra's staff used the compilation method in these films," the Archives and Records Administration writes. "Footage was selected from the resources of the National Archives, the Library of Congress, the Museum of Modern Art, the Army Pictorial Center, and the newsreel libraries in New York City. Films from Allied Governments and those captured from the Axis were also used in the productions. These films were arranged and rearranged to explain official U.S. policy on the causes of the war and toward the Allied and Axis powers." Much of the series was worked on at Kaufman Astoria Studios.

Reviewing events leading to the war, Prelude to War was the first film in the Why We Fight series, and helped recruits understand the contrasts between American democracy and fascism.

The Nazis Strike and Divide and Conquer

The Nazis Strike and Divide and Conquer detail German expansion toward the east and west. The Nazis Strike aimed to put the scourge of Nazism in historical context, introducing a German nation who had begun their aggressive posture as far back as 1863, with Otto von Bismarck, and was now pouring across greater Europe in their current form, the Nazis. Divide and Conquer begins immediately after the fall of Poland, and makes clear Hitler's treachery, specifically towards the small, neutral countries of Europe he promised he had no intention of invading. Denmark, Norway, the Netherlands and Belgium were all told that the Reich had no interest in them. A series of Hitler's quotes are played to great effect in the film—"We have concluded a non-aggression pact with Denmark," "Germany never had any quarrel with the Northern States and has none today," "The new Reich has always endeavored to maintain the traditional friendship with Holland," "The Reich has put forth no claim which may in any way be regarded as a threat to Belgium." These quotes are repeated after the film shows the Nazis invasion and conquest of each country.

"Battle of Britain concentrates on the fight against the attacking Luftwaffe and the resilience and courage of British civilians," the Archives writes. "Battle of Russia, running almost two hours, quickly reviews centuries of Russian history, emphasizing the theme that the Russian people would ultimately defeat and drive out all foreign invaders. This film shows in grim detail the bitter conditions of fighting on the Eastern front. Battle of China, quickly withdrawn from circulation after its release, is the least historically accurate of the series. Its footage, obtained from many documentaries on China, shows the magnitude of the struggle between China and Japan and builds sympathy for the Chinese people. War Comes to America is the summation of the work done by Colonel Capra's film staff; it is a fast-paced, rhythmical film on the values of American culture and U.S. composition, achievements, failures, and ideals."

"Because we were at war, they deemed it a top secret base," Rosenbluth says. "If you go down to the building department you will find a block and lot number of the property, but everything else is gone. The Army held on to it as an owner and functioning facility from 1942 to 1970. In World War II there were three wood barracks where we have built new stages. By the time the Korean conflict came about, they built a building across the street to be the barracks and that building has since been turned into the Frank Sinatra School of the Arts. The bones were here for a lot of growth when we came in."

Once the Army pulled up stakes in 1970, Kaufman Astoria Studios was left in the lurch. "They handed the City of New York a use agreement. New York was having very grave financial difficulty in 1970 and they were not really sure what to do with the property," Kaufman says. "So the period of time which the facility sat vacant was 1970 to 1977. In 1977 a not for profit group (Astoria Motion Picture and Television Center Foundation) was formed that consisted of labor, industry and government to save this facility and get it landmarked. In 1977 they convinced Sidney Lumet to do The Wiz here, the one with Dianna Ross and Michael Jackson. That started a slew of films that were done under the auspices of that Foundation. Films like Hair, All That Jazz, Endless Love, etcetera."

"By 1980 the City of New York recognized that the Foundation needed a developer to come in because we needed to renovate and expand the facilities. So they put out an RFP and that is when George Kaufman won the rights to develop the Studio. We (Kaufman Astoria Studios) came in 1980, expanded the facility, and turned it into the campus it is today."

Check back in with us for Part II of this conversation.