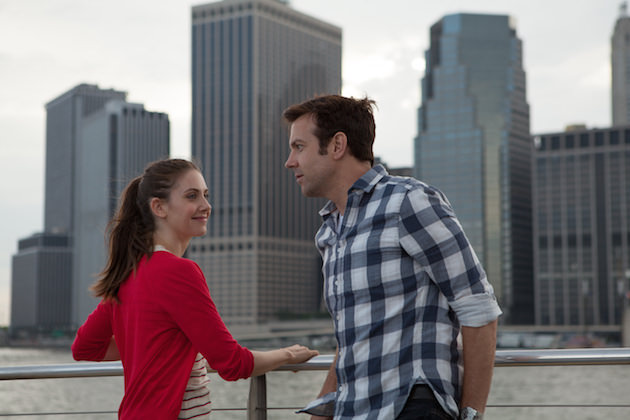 Sleeping With Other People & the ‘Can Guys & Girls Just Be Friends?’ Film

The story sounds like so many we've heard before—you run into the guy who took your virginity at a sex-addict support group and form a When Harry Met Sally-type friendship. Does this ring a bell for you? Okay, not exactly the stuff of the famous Katz’s Deli scene (also, at that point Harry and Sally hadn't become lovers), but this is exactly what happens in the romantic comedy Sleeping with Other People, starring Alison Brie (Community, Mad Men) and Jason Sudeski’s (Saturday Night Live, Horrible Bosses).

The new red-band trailer by IFC Films is definitely NSFW – and a lot of fun.

While this may be a second or third date film, here are eight first date options in the When Harry Met Sally tradition that ask the age old question… Can guys and girls really just be friends?

A hotshot thirtysomething record executive tries to win over the girl who once liked him only "as a friend" in this slapstick comedy. In high school, Chris Brander (Ryan Reynolds) was an overweight, maladroit teen who spent every waking moment with his co-ed pal Jamie Palamino (Amy Smart). On the verge of graduation, Chris is humiliated when his yearbook confession to Jamie — that he wants to be more than "just friends" — is read aloud. Jamie is flattered, but rebuffs his advances, and Chris spends the next decade transforming himself into a buff, callous ladies' man. Assigned by his boss to sign his pop star ex-girlfriend Samantha James (Anna Faris), Chris finds himself stranded in New Jersey for the holidays, where he promptly sets out to find Jamie. But winning back the love of his life proves difficult, as Chris not only has to get back in touch with the sensitive teen he once was, but also fend off competition from another former geek, the guitar-playing Dusty (Chris Klein).

Ken Kwapis' adaptation of Greg Behrendt and Liz Tuccillo's best-selling self-help book “He's Just Not That Into You” follows the love lives of a dozen or so characters. Ginnifer Goodwin stars as Gigi, a young woman attempting to understand the mixed signals she gets from the men she's dating. She gets advice from a bar owner (Justin Long) who prides himself on understanding the ins and outs of the dating scene. Gigi's co-worker Janine (Jennifer Connelly) finds herself involved in a major redecorating project with her husband, Ben (yup, Bradley Cooper). Unbeknownst to Janine, Ben contemplates an affair with Anna (yup again, Scarlett Johansson), an attractive woman trying to make a career as a singer. Another of Gigi's friends at work, Beth (Jennifer Aniston, seriously), enjoys a successful, healthy relationship with Neil (Ben Affleck, I mean this cast), but storm clouds hover over them as he has no interest in getting married. Naturally, Kris Kristofferson co-stars as Beth's father.

A New York headhunter (Mila Kunis) enters into a no-strings-attached relationship with her latest client (Justin Timberlake), but finds things getting unexpectedly complicated when emotions enter the picture. Patricia Clarkson and Woody Harrelson co-star. This is one of those films that puts two annoyingly attractive people together and pretends like they’re not going to end up together.

Lifelong friends Adam (Ashton Kutcher) and Emma (Natalie Portman) attempt to avoid falling in love after falling into each other's beds in this comedy exploring the complexities and quirks of having friends with benefits (who, again, happen to be very attractive). Adam was a typical, hormonal 14-year-old when he first came on to Emma at summer camp — and got shot down in flames. In the years that followed, however, Adam and Emma continued to cross paths until, eventually, they both caved to their animal instincts. Despite an intense session of earth-shaking sex, however, Emma makes it clear to Adam that the last thing she wants is a committed relationship. And thanks to the fact that Adam's father (Kevin Kline), a fallen television star, has just begun dating his son's ex-girlfriend, the horrified bachelor has developed an aversion to monogamy as well. Before they both know it, love has reared its ugly head and they've gotten too emotionally involved to cut the relationship off cold. But is commitment in the cards for the couple that always swore it would never get serious, or has the time come for them to finally part ways once and for all?

Jane Austen might never have imagined that her 1816 novel Emma could be turned into a fresh and satirical look at ultra-rich teenagers in a Beverly Hills high school. Cher (Alicia Silverstone) and Dionne (Stacey Dash), both named after "great singers of the past that now do infomercials," are pampered upper-class girls who care less about getting good grades than wearing the right clothes and being as popular as possible. But Cher, who lives with her tough yet warm-hearted lawyer dad (Dan Hedaya) and hunky, sensitive stepbrother (Paul Rudd), also has an innate urge to help those less fortunate — like the two introverted teachers she brings together ("negotiating" herself improved grades in the process) and new friend Tai (Brittany Murphy), who starts out a geek and ends up a Cher prodigy. Cher also possesses her own sensitive side, and she is looking for the perfect boyfriend, whom she ends up finding where she least expected. Spoiler alert: of course it’s Rudd.

Thirteen-year-old Jenna (Shana Dowdeswell) has had enough with the trials of adolescence. In addition to being saddled with a devoted-but-nerdy best friend, Matt (Sean Marquette), she falls victim to one of the dangers of playing Seven Minutes in Heaven with the coolest kids in school: being stranded without a willing make-out partner. Humiliated, Jenna buries herself in the aforementioned make-out closet, wishing she could skip the whole adolescence bit and move straight into adulthood, and miraculously wakes up just weeks away from her 30th birthday. Of course, a lot has changed since going to bed the night before, not the least of which being an impressive set of womanly curves. The new, older Jenna (Jennifer Garner) is a successful magazine editor with friends in high places and a lion's share of potential suitors — including a hockey-playing boyfriend and a swarthy married man. The problem is that her mind hasn't matured with her body; Jenna not only finds living on her own more terrifying than cool, but is quick to dismiss any male over the age of 14 as "gross." Half excited, half mortified, Jenna seeks out Matt (Mark Ruffalo), whom she learns she had spurned as a teenager in an effort to join the popular crowd. Will they or won’t they?

A handsome and successful bachelor is taken aback when his dream girl asks him to be the "maid" of honor in her upcoming wedding in this romantic comedy starring Patrick Dempsey and Michelle Monaghan. Tom (Dempsey) and Hannah (Monaghan) have been best friends for years. Though all the hard times, Hannah has been the one constant in Tom's life, and the one person he knows he can always rely on. When Hannah leaves for a six-week business trip in Scotland, Tom is surprised to realize how truly lonely he is without her. Life just isn't the same without Hannah around, so the moment she returns, Tom resolves to ask for her hand in marriage. But apparently Hannah's trip wasn't all business, because upon returning home Hannah announces that she has gotten engaged to a dashing Scotsman and will soon be starting a new life overseas. She's convinced that Tom will be thrilled for her, and wants him to play a crucial role in the wedding. His spirits are crushed, but his love for Hannah is stronger than ever before, so Tom reluctantly agrees to be the "maid" of honor so that he can prove his love in no uncertain terms and convince her to call off the wedding before true happiness slips through his fingers.

This film was one of the more mainstream offerings in the array of films that emphasized the overly hyped "Generation X" phenomenon, a list that ranges from Slacker to Singles and includes a host of other films. Winona Ryder stars as Lelaina, a recent college graduate. Out on her own and independent from her supportive, but out-of-touch parents, Lelaina faces the realities of careers and relationships. She can't stand her internship under a local television personality (John Mahoney), and she's forced to choose between Michael (Ben Stiller), a well-intentioned music-video network executive, and Troy (Ethan Hawke), a brooding, sensitive slacker. Meanwhile, she must also protect the artistic integrity of "Reality Bites," a video documentary that depicts the everyday lives of her friends (Hawke, Janeane Garofalo, and Steve Zahn). This 1994 release also marks the feature directorial debut of Ben Stiller.