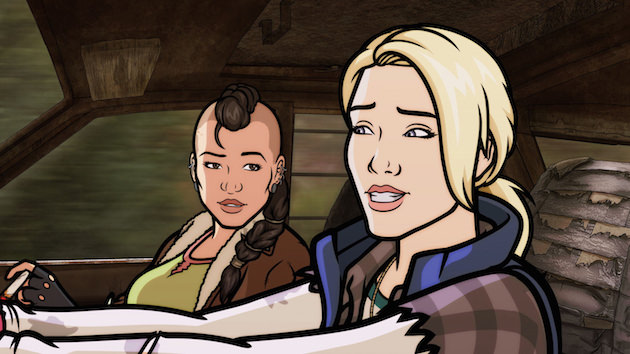 Post Apocalyptic Animated Comedy Cassius and Clay Will be Awesome

Have you ever watched Archer? If the answer is no, rectify this situation immediately. Comedy Central’s genius animated comedy, created by Adam Reed, is consistently hilarious. This animated spy thriller follows Sterling Archer (H. Jon Benjamin) and his often bloody, absurd exploits with his fellow operatives (which includes Chris Parnell, Aisha Tyler and Jessica Walter, the latter best known as Lucielle Bluth on Arrested Development).

Now Archer creator Adam Reed is teaming up with writer and executive producer Megan Ganz, whose credits includes shows you’ve definitely seen (Modern Family, Community) for the post apocalyptic animated comedy Cassius and Clay, which is coming to FXX in 2016. The show follows two bandits traveling in the American South after the apocalypse. Cassius Cordwood is voiced by Kaitlin Olson, the brilliant Dee Reynolds from It’s Always Sunny in Philadelphia, and Shopcarter Clay is voiced by Lake Bell, a class act who wrote and directed the very good In A World…in 2013.

The rest of the voice cast is incredible (and their character names are equal to “Shopcarter” Clay). They include Susan Sarandon, who will play Connie Mack, a saloon and brothel owner, JB Smoove will play Doc Benz, the town’s only doctor, Kevin Michael Richardson is Smiffy, a colossal blacksmith, and Jeffrey Tambor is Mayor Waistill Weeks, the feckless mayor.

Combining Adam Reed, Megan Ganz and this cast is as close to a sure thing as you can get.