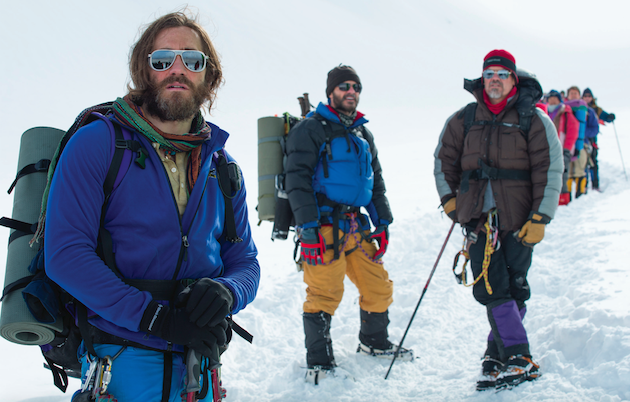 “Human beings simply aren’t built to function at the cruising altitude of a 747. Everest is without a doubt the most dangerous place on Earth.”

This comes from Rob Hall (Jason Clarke), legendary New Zealand mountaineer and the head guide of the doomed 1996 Mount Everest expedition that Everest based on it. Directed by Baltasar Kormákur (2 Guns, Contraband), Everest will follow two expedition groups, one led by Hall, the other by Scott Fischer (Jake Gyllenhaal), and what happens when they’re pinned down by a massive storm. The real events were captured by author Jon Krakauer in his seminal book Into Thin Air, who was a part of Rob Hall’s group and who will be played by Michael Kelly.

The film was shot on location in Nepal on the foothills of Everest, the Italian Alps and at Cinecittà Studios in Rome and Pinewood Studios in the U.K.  It will be released in 3D on September 8. The cast also includes Josh Brolin, John Hawkes, Robin Wright, Michael Kelly, Sam Worthington, Keira Knightley, and Emily Watson.