Much has been made about the odyssey of M. Night Shyamalan’s film career. He had one of the most explosive debuts in modern film history, bursting onto the scene with The Sixth Sense, his 1999 blockbuster that resonated with audiences and had that incredible twist ending. The twist ending became the young director's hallmark, as would his ability to make intimate, uncannily creepy films. He followed The Sixth Sense up with two more hits—his ordinary man who is actually a superhero film, Unbreakable, and his aliens versus lapsed preacher film, Signs. Even The Village, which wasn’t a hit on the same level of as his previous three films, had yet another twist ending and showed a lot of the writer/director's way with creating wonderful tense sequences. Then came the much discussed run of less than stellar films: the fairy tale film Lady in the Water (and the book that production inspired), the eco-horror The Happening, and the two big-budget bombs, The Last Airbender and After Earth.

This is all to say that The Visit, which opens on September 11, which Shyamalan partly financed with his own money, has been earning praise as a return to form for the writer/director. Brooke Barnes' profile of Shyamalan in a recent New York Times piece revealed a humbled, but still confident (and still young—Shyamalan’s only 45) director who is ready to give audiences the thrills and chills he made his name on.

So what’s The Visit about? Becca (Olivia DeJoonge, The Sisterhood of Night) and her brother Tyler (Ed Oxenbould, Alexander and the Terrible, Horrible, No Good, Very Bad Day) are going to their Nana (Deanna Dunagan, Unforgettable) and Pop Pop’s (Peter McRobbie, Lincoln) farm in remote Pennsylvania for a week. Becca’s a budding filmmaker, and brings along her camera to document the week with her maternal grandparents, both of whom she and her brother have never met. Tyler, an aspiring rapper, also suffers from serious anxiety, and has created a series of elaborate rituals to stay calm. Having been abandoned by their father years ago, Becca and Tyler are at first relieved to receive the warmth of their grandparents' unconditional love. Becca’s camera and Tyler’s anxieties both come in to play when they find something’s not quite right with these old people they’ve never met. As the hours pass, the kids start to worry they’ll never make through the week alive, and Shyamalan's horror-comedy kicks into high gear.

So what did the writer/director do to get back into form?

This is the kind of self contained, smaller film that Shyamalan excels at. “One day, I said, ‘We’re going to make small movies from now on,’” he said in the production notes. “There is a speed that ideas come to me, as well as a certain time that they’re meaningful to me. For a big movie that takes three years to make, it is just too long. I need to write it, make it and shoot it with the same power that came from the idea that made sense to me at that time.” 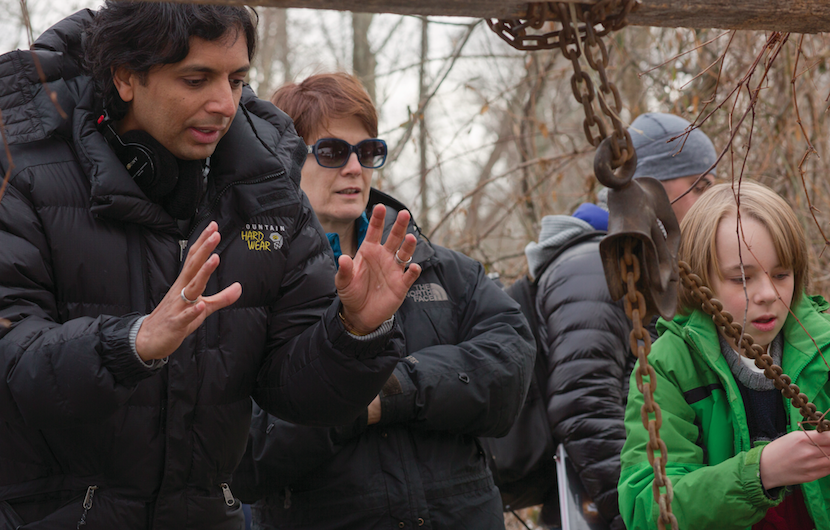 With a smaller budget and more intimate story, Shyamalan wanted to ratchet up the thrills he built into script by having his actors experience the story in chronological order. This allowed the performers to discover their characters as the screenplay’s horrors increase.

“The film strategy is to make everything look like it was by chance, and that is challenging. Two of the characters in The Visit have cameras, so it is an approach of filming two different styles to distinguish between the two.” Shyamalan painstakingly designed The Visit from Becca’s perspective, allowing the film to begin with “I’m making a movie about my family” and unfolding into “What have I discovered?”

“Becca has a beautiful eye and heart, and she sees the world as beautiful,” Shyamalan said. “Her being a filmmaker motivates her character, and the film itself is an extension of that.” There is no CGI or SFX in the film.

Shyamalan's film might have been small, but he brought on some big names to help make sure The Visit didn't look or feel small. They include Naaman Marshall, the supervising art director on The Dark Knight Rises and Dawn of the Planet of the Apes, and cinematographer Mayrse Alberti (Creed, The Wrestler, Velvet Goldmine).

One of the things he and Shyamalan decided on in the early going was that colors would play a big part of the film’s language. “Night and I had the idea of keeping the children in vibrant colors and having everything else in muted tones,” Marshall said in the press notes. “The children are the energy in the film. We were able to work with set decorators to ensure the house was filled with monotone colors, and with costume designers to have a pop of color in their costumes.”

For one crucial scene when Nana’s lunacy is finally fully realized by the kids, the action had to take place in a crawl space under the house. The tight spaces that Shyamalan wrote into the script were aided and abetted by Alberti, who was crucial in making sure the film looked both great and like it was filmed by the children.

Shyamalan realized a long held desire of his on The Visit; to make a film without a score. His logic holds considering if what we're seeing was filmed by Becca and Tyler, a score wouldn’t really make any sense. “I feel like the intensity I wanted here couldn’t be achieved with a score,” Shymalan said. “The sound effects are the score and are designed to keep you off-kilter.”

Without the usual musical cues that help move one scene into the next, or, fill out scenes in which the performances aren’t getting you to the necessary emotional spot, Shyamalan’s sound team stepped in. Supervising sound editor Skip Lievsay, sound mixer David J. Schwartz, sound effects editors Wyatt Sprague and Larry Zipf, assistant sound editor Caleb Townsend and sound mix engineer Dan Timmons gave the director what he needed. Every crack, creak, step, and slowly opening door was captured and maximized for peak creepiness. An eerie soundtrack by music supervisor Susan Jacobs helped finish the scoreless film.