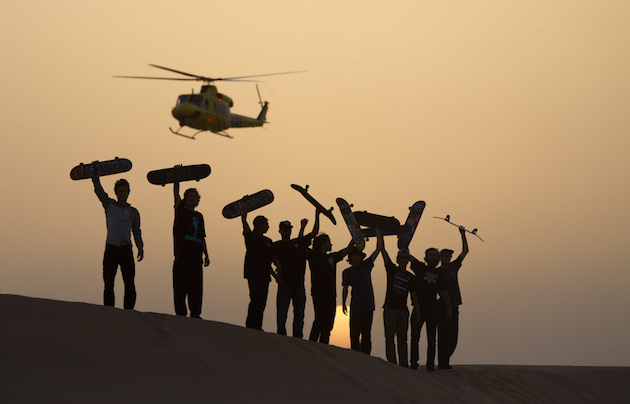 Director Ty Evans on his Skateboard Documentary We Are Blood

Director Ty Evans is a skateboarder and self-taught filmmaker who went from filming his friends using whatever cameras he could scrounge the money for to using state-of-the-art camera equipment, some times mounting cameras to a helicopter, for his groundbreaking work on We Are Blood. The documentary features  renown skateboarder Paul Rodriguez (P-Rod) and his skateboarding family (Theotis “Theo” Beasely, Chris “Cookie” Colbourn and Boo Johnson) as they travel around the world, with Evans and his small crew, to skateboard in places like Spain, Dubai and China. Using brand new equipment that allowed Evans and his crew unprecedented shots of the boarders, We Are Blood follows P-Rod and friends on a globe hopping mission to spread the gospel, and love, of a sport that has gone from the margins of society to center stage.

Working with Brain Farm, a production company that utilizes film equipment like the Shotover F1, Phantom Flex 4K and Aerigon UAV, and Mountain Dew Green Label Films, Evans had access to the highest quality equipment to capture a breathtaking skateboarding experience for viewers. We Are Blood premieres this Friday in Los Angeles before releasing wider. We spoke to Evans about his journey from skateboarder to indie filmmaker.

Tell me a bit about your background, and how you came to We Are Blood.

I started skateboarding in the early eighties, and I watched as more and more of my friends became better, then became sponsored, and I started filming them. I was making these really low budget skateboarding films. Then in the early nineties I started making my own films. I’ve done over twenty skateboarding films, yet I never went to film school, I learned as I went along. Eventually I started directing commercials and started learning that whole world, which led to me melding those two worlds together—combining that guerilla down and dirty filmmaking with how things work on a commercial set.

Right around this same time, digital filmmaking started taking off, so that’s the last thing that came together to let us do these high end films with a really small crew. I ended up meeting Kurt Morgan, who runs Brain Farm, and we started talking about my next project.

Walk me through the production process of making a globe-spanning skateboarding film.

The first year was a lot of pre-production, just figuring out what the film is. What we realized is that this film needs to speak to the core skateboarding community as well as the non-core community. Most skateboarding films have trick after tirck after trick, and then some music. For this film, we wanted to bring something new to the table, so the skateboarder could watch and love it, but also their parents could watch, too. That’s what we set out to do this with this film, and that's what separates us.

How'd you go about doing that?

First, I needed someone from the community who could narrate this film. I ‘ve known Paul Rodriguez since he was 14. He’s the perfect fit. He’s huge, and I knew he could bring this film to the masses. I called Paul up and he came by my house. I had this whole collage up on my wall about the film, and he walked in and said ‘What is this?’ I explained to him what I wanted to do, and it just so happened he was kind of burned out from other skateboarding films. He was actually thinking about doing something like this, so he felt it was crazy that I approached him. He wanted to do something to elevate skateboarding. 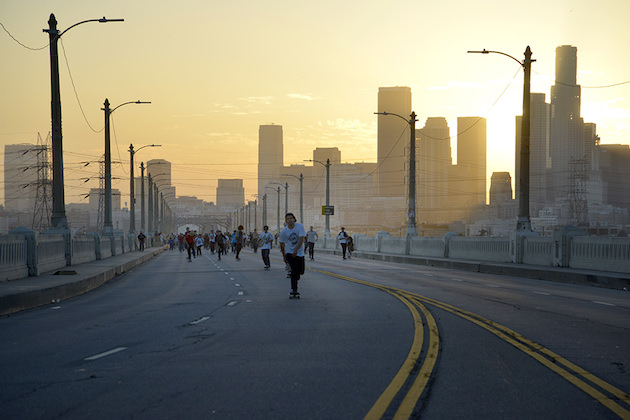 Where'd you head to first once you'd raised the money?

In April of last year we went to China, we had our crew, we had our skaters, and we went out to China with all of this crazy gear. The one thing about being a skateboarder is we all share this common bond. I’ve traveled around the world and met skateboarders everywhere, I can meet someone in China who doesn’t speak a lick of English but he skateboards, and we share this bond. This world is really small. We see how small it is now that we’re getting connected by social media. This bond, I thought it would be cool to make a film about sharing tht. Then also traveling around the world, and filming the best technology to capture this skateboarding.

Tell me about this technology you used.

When I first met Kurt Morgan, he had this camera system called the Cineflex, which is this gimbal system that goes beneath a helicopter. It’s what they filmed Planet Earth with. Once I came aboard with Brain Farm, I wanted to figure out how to use these stabilized camera systems on vehicles.

So we used a bunch of stuff. The Shotover F-1, which allowed us to mount a camera onto a trailer hitch, which we welded onto the front and back on a vehicle. This meant we could be driving 80 miles-per-hour down a highway and film a skateboarder doing a trick. These stabilized gimbals have become smaller and can now be handheld. The Moby, even the heavier one, the M15, which can hold 15 pounds—all these stabilized camera systems gave us ways of filming skateboarding like never before. We were putting them onto remote controlled helicopters!

Do you have any favorite shots?

When you go to China, it’s so hectic and busy, there are babies crying and phones ringing and cars and mopeds whizzing by you and it’s just so crazy, and we were able to capture so much of that. When you see that China section, it feels like you’re in China, and what it’s like to be there when you’re a skater. Here in the U.S., people are so accustomed to skateboarding, they’re used to it. You go to China and start skateboarding, and you have a crowd of a hundred people around you, they’re clapping, they’re smiling, it’s one of the coolest things ever.