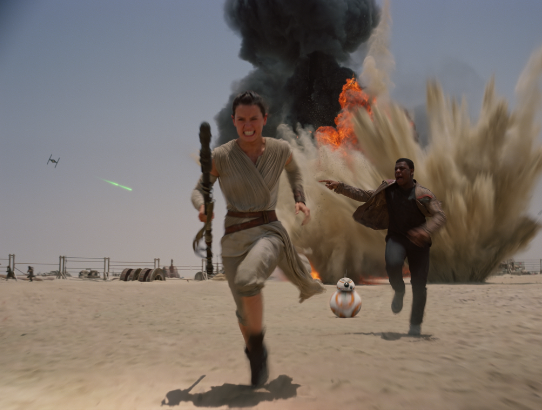 When it came to creating a new droid for the upcoming Star Wars: The Force Awakens, the task for J.J. Abrams and his fellow filmmakers was not without potential disaster—R2-D2 and C-3P0 are such iconic characters in the Star Wars universe that any new droid that was to have a decent sized role (larger a role than, say, the jealous droid R5-D4) would have to be worthy of its legendary predecessors. The folks at StarWars.com published this eye-opening long form article about the newest droid in the galaxy—BB-8, that you should read in its entirety. We've selected a few of our favorite details below.

BB-8's Life Began as a Sketch on a Napkin

When J.J. Abrams was imagining what a new droid might look like, he started with a simple sketch of two circles, one atop the other, and a single eye. This simple sketch was enough for Lucasfilm concept designer Christian Alzmann to start fleshing out the concept. Alzmann said Abrams' sketch made it clear that BB-8, like R2-D2, was no villain, and he immediately took to the soccer ball-like design. “I looked at a lot of soccer balls,” Alzmann says, laughing. “When you’re on a project like that, you start looking at everything spherical for inspiration. I think I ran across a soccer ball, and I was just like, ‘Oh, it’s kind of perfect.’”

Once the overall design came together, it was up to concept designer Jake Lunt of the creature shop to start the process of creating BB-8, as Abrams' wanted his newest droid to be a practical effect. The final design, the half-dome head atop the rotating spherical body, bore all the trademark signs of a Star Wars droid: imaginative, but also functional.

Finding a Real-World BB-8 as a Prototype

The head of Star Wars: The Force Awakens creature shop is Neal Scanlan (Prometheus), who was tasked with staying true to the spirit of BB-8's design as conceived by Abrams, Alzmann and Lunt. BB-8 was a hemisphere on a ball, or as Scanlan calls it in the StarWars.com piece, a "ball-bot." "The whole ball-bot, as you would call it, concept, is something that universities to individuals have played around with. We looked very closely at what one would consider existing technology and decided that it was not far enough advanced to be able to put that into a droid or into a robot that we could use in the film world. Not yet, anyway…So, the idea of having versions of BB-8, which we knew we could have aspects digitally removed, really then opened up a much greater sphere of possibility.”

Senior animatronic designer Joshua Lee built a little puppet version of BB-8 to see if the droid could move without requiring extra parts, like an extending neck to allow for greater movement. "I built, in half a day, a little polystyrene puppet with the main movements," Lee says. "All the head movements and the ball rolling around, and handles on the back. I remember as soon as I picked that up, it was just so expressive. You could see that there weren’t any other fancy movements needed, that there’s so much expression and character actually in the shapes and in the way the head sort of arched over the sphere."

Now it was time to bring in the actual puppeteers, Dave Chapman and Brian Herring. They had two weeks on an empty soundstage to figure out how BB-8 would move. Directed by Neal Scanlan, Chapman and Herring did camera tests with BB-8 to discover the personality of the droid. They had to figure out how to manipulate BB-8 in such a way to convey sadness, curiosity, joy, and fear, and how to convey those emotions consistently. (See BB-8 displaying what appears to be fear at the 44 second mark below)

“BB-8 can cock his head over and look away, he can double take, he can look scared, he can look angry,” Herring says. “We managed to find a whole vocabulary of movement for him, if you will. We worked out a whole bunch of stuff. What would he do if you turned him off? What happens to his head if you power him down? Does he go down stairs? Does he go up stairs?”

Now it was time to show Abrams. It wasn't until a week before filming began when the team presented the director with BB-8.

"He never put pressure on us, he never made us feel bad," Scanlan says. "I remember the day that we showed it to him, his first initial response really hit home with me, because he looked at [Lucasfilm president] Kathleen Kennedy and said, ‘What a relief.’ And I could see the weight of the world lift off his shoulders. I think that was the point at which, I suppose, the decision was made that we could go practical, and we didn’t have to go digital."

The relief in the room was such that Scanlan describes the mood lifting and the rush to interact with BB-8, their newest droid, and interact with him as a character.

The model approved by Abrams gave the filmmakers what they needed to build a small army of BB-8s, each with their own speciality, designed by Lee and electronic design and development supervisor, Matthew Denton. One BB-8 was known as the "wiggler," a static droid who could twist and turn on the spot, and was used for close-ups. There were two versions that had stabilizer wheels and could be driven by remote control. There was a cuddly version, so to speak, that could be picked up by actors and controlled via remote. There was the "bowling ball" BB-8, that could be rolled into a shot and which would never fall down. And there was the rod-puppet BB-8, operated by Chapman and Herring. One would control BB-8's head, creating attitude and nuance, and the other controlled his body, later to be digitally erased.

Although the team ruled out building a fully functioning, remote controlled BB-8 for filming, they decided they wanted to make one BB-8 that was a proper droid—no puppeteers, no rods, totally free.

After a ton of work (and additional financing from the powers that be), Scanlan's team had built an actual BB-8 droid, just in time for the Star Wars celebration in Anaheim last April. During a The Force Awakens panel, BB-8 rolled out onstage, beeping, booping, looking around, and circling fellow droid R2-D2. It confirmed was the first official confirmation that BB-8 was a practical effect. People went nuts. 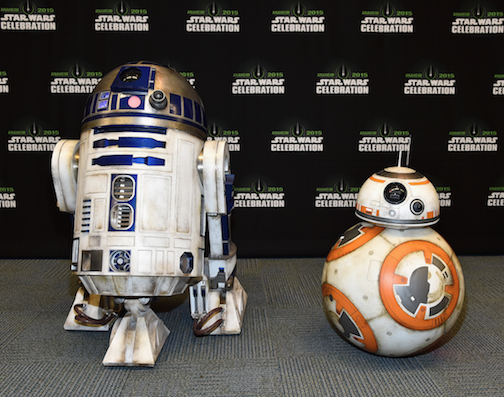 "When that thing rolled out at Anaheim,” Herring says, “Dave and I were doing a commercial in South Africa and we were watching the live stream. And out it came, and we were like, ‘They did it. They bloody did it! Look at this thing!’ It just blew us away.”