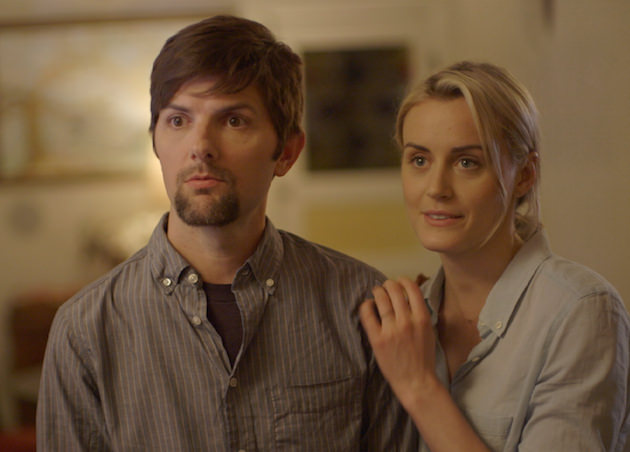 Over the years, plenty of films have featured over-the-top parties that slowly spiral out of control, but there have been few movies like Patrick Brice’s new comedy The Overnight.

The film tells the story of two sets of parents who come together for a pizza party in a Los Angeles home. The couple played by Adam Scott and Taylor Schilling have recently moved to L.A. from Seattle and are looking for new friends in the neighborhood. A second couple, played by Jason Schwartzman and Judith Godrèche, invites them and their son over for dinner. After their children (each couple has one son) go to sleep that evening, the two couples stay up for a night of laughs, sexual tension and wild behavior.

Brice, who previously co-wrote, directed and starred in the 2014 thriller Creep, was encouraged by his Creep co-star Mark Duplass to make this film. At the end of that production, Duplass offered to produce and collaborate on Brice’s next feature. Brice then wrote the script for The Overnight and filmed the entire movie over the course of twelve days.

With the sex comedy expanding to more theaters this week, I recently had the opportunity to talk to Brice about the intensity of filming a movie in twelve days and how the production schedule helped create chemistry within the cast. Below is a slightly edited transcript of our conversation.

What gave you the original idea for the film?

I had made this other movie Creep with Mark Duplass and we were sort of coming onto the tail end and finishing that movie up and Mark said, 'If you want to make a small movie and write and direct it, I'll produce it for you.’

Initially just from the idea of us making another film together and making something that's sort of within his low budget model, I started thinking about friends of mine who are in their 30s and having kids and kind of trying to reconcile being a parent [with] having a sense of individuality and having a social life and I thought there was an interesting tension in that, so that was the jumping off point with these characters. Once that came into play, Mark and I started talking about Who's Afraid of Virginia Wolf and these films that take place in 24 hours and feature these descents into crazy evenings. So I was thinking a lot about After Hours or The Party— these ‘hang out movies’ where you're essentially just spending 24 hours watching these characters reveal themselves to you.

Have you ever been to a party like the one featured here that slowly gets out of control?

No, my self-preservation instincts are way too high to put myself in a situation like that. 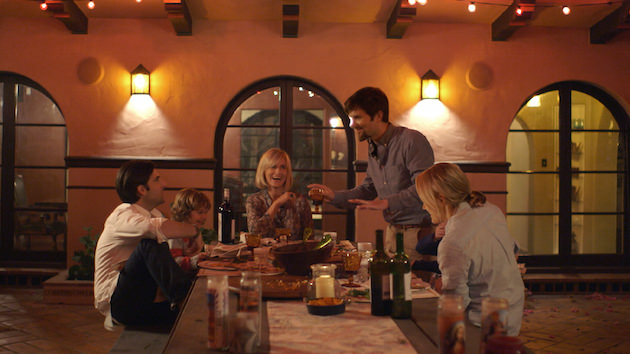 I heard that you filmed the movie over twelve days. Most of the film though is set at night, so did you only film in the evening?

Ten of those days were nights so we would come into work at around 3 or 4 in the afternoon and we'd finish around five or six in the morning. We probably could've shot the film [during the day] since it mostly takes place in interiors. It might've been easier on the actors but at the same time, I really love what we were able to achieve tonally because of the fact that we shot at night.

There's such a natural flow to the relationships and the dialogue between the two couples. How much of that was improvised and how much of it was in the script?

We had a full script for the movie and we had no rehearsals, so any kind of preparation was simply conversations I was having with the actors before we started shooting, and a big part of those conversations was me trying to set a tone.

I wanted it to feel very naturalistic and as real as we could get both in the performances and in the look for the film. We shot it primarily with available lighting and, performance-wise, these guys pretty much stuck to the script, but I wanted them to have the freedom to improvise. If there were moments that they felt like they could drift off the script and explore something that felt emotionally true to them, I wanted them to feel comfortable in doing that, and then also to have such gifted comedic performers, you don't want to rein them in that much. You want them to be able to have room to play and feel comfortable. I'm really happy with the balance we were able to find in that. 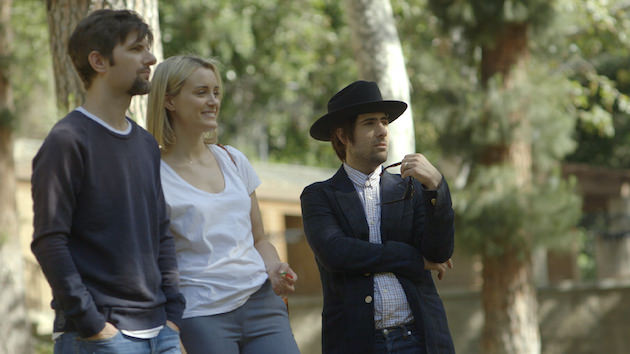 Do you know if Jason and Judith and Adam and Taylor knew each other before this film? Their relationships onscreen do feel very comfortable.

I think the only people that knew each other were Adam and Jason. [They] had done an episode of Parks and Rec together but that was really it. They weren't super close but they'd always wanted to do something together, and then we had maybe one meal beforehand with all the actors, and then it was mostly just showing up on set and getting to know each other on set.

Throughout the movie, all of the actors are revealing themselves both physically and emotionally. How did you get the cast to feel comfortable during their most personal scenes?

I think that was an intimacy that was created by how we made the movie. It was a very small crew and the fact that we were shooting in the middle of the night meant there was no real distraction outside of the immediate task at hand. There was kind of a forced intimacy that happened as a result of that which is nice, and then it was just the fact that all these guys are really smart, veteran actors that responded to the script.

The fact that they responded to the script alone was all the confidence I needed in directing them. They just all have really great instincts about where to go in terms of navigating that kind of closeness that you're talking about.

As the film goes on, the couples engage in more and more outrageous behavior. Did you film the movie in chronological order to make those leaps feel more natural?

As much in chronological order as we could. Because of the kids that are in it and the kids' schedule, we kind of had to bob and weave with them, but some of the bigger moments like, for example, the climax of the movie —that came towards the end of shooting which I think was really important because that scene was only going to make sense and seem believable if we were playing it in relation to how all the other moments had been played. It only benefited us to have that scene come at a point that we could really nuance it into something that felt true in relation to what we'd already shot. 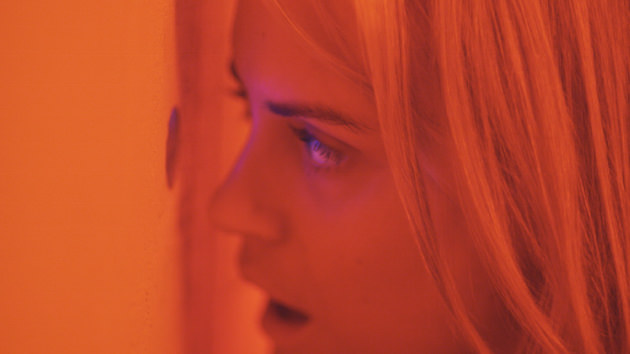 How did you balance the craziness of the behavior that happens during the course of the evening with the believability of the characters?

That was a hunch for me because the script itself reads as a fairly broad comedy, and you read these moments — these bigger and kind of crass moments — and you think that can't exist in the same space as this kind of intimate sweet movie about people dealing with relationships. For me, it was a hunch that we were gonna be able to achieve that so one of the things that I said to the actors and that we all kind of understood going into it was that no matter how ridiculous any of this stuff gets, we're gonna play it straight and we're gonna play it [like] any of this stuff that's happening is actually in the realm of believability for these characters. I think having that there lends itself to the audience then going with that.

What was the greatest difficulty in making the movie and going back, is there anything that you would change about the process?

I would say the greatest difficulty was the fact that we had to shoot the entire film in twelve days. We were shooting seven to ten pages a day. It was a very quick intense shoot and once we would get a scene right, we would have to move on fairly quickly, so that was definitely the most difficult aspect of it.

At the same time going back, I wouldn't change that because I really think there's an immediacy and a specific feeling that the movie has and a specific feeling that the performances have that came as a result of making it that way—because we were under the gun and we weren't feeling relaxed. I'm prepared to do that sprint again on the next film, but now at least I know that it's gonna be a sprint. I'm less scared of that. It was nice to give in to the flow of things.