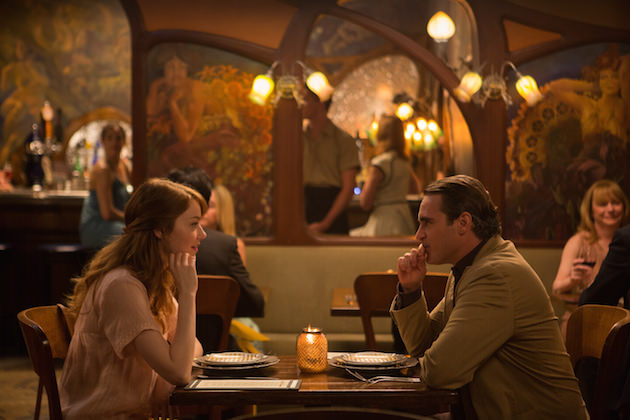 Woody Allen’s latest film, Irrational Man, is likely to elicit groans or worse from Allen’s detractors. The movie stars Joaquin Phoenix as Abe Lucas, a floundering philosophy professor for whom things get better after he enters into a relationship with a student, Jill Pollard (Emma Stone). He also considers murdering a judge — who, at least, is corrupt — which also lifts his spirits. Murder and May-December relationships aside, the film’s biggest non-surprise is that Allen finally put a philosopher, or at least, a professor of the art, at the center of his lens. In his early, 1960s stand-up, Allen once joked that college had given him the heave for cheating on a philosophy exam: “I looked within the soul of the boy sitting next to me.’’ Further philosphical references, asides, bickerings, and meanderings followed throughout Allen’s films of the 1970s, with five moments in particular leading up to the contemporary character of Professor Lucas.

In the course of becoming an accidental revolutionary in a fictional banana republic, Fielding Mellish (Woody Allen) also spends a lot of time trying to impress social activist Nancy (Louise Lasser) his girlfriend-turned ex girlfriend-turned wife. He claims to love Eastern philosophy, and she asks him if he’s read I Ching, leading to this exchange:

Nancy: Have you read the I Ching?

Fielding: Not the actual Ching itself, but I’ve dabbled in Kierkegaard.

Fielding Mellish: Yes… he would be the first to admit it.

Waiting on line for a movie with Annie (Diane Keaton), Alvy Singer (Allen) gets increasingly enraged listening to the pseudointellectual prattling of a supposed Columbia professor waiting behind him. When the man shamelessly references the Canadian philosopher Marshall McLuhan, Alvy wishes for a horse-shit filled sock, and then gets into it with the guy in a joint aside to the camera. He fantasizes bringing the actual McLuhan (played by McLuhan himself) out from behind a movie poster in the lobby, where he admonishes the philistine, “How you ever got to teach a course in anything is totally amazing.” Later on, while the character is minor as can be, Allen introduces his first philosophy professor character. At a party, a fellow short guest is pointed out to Alvy as “Herschel Kaminsky. He has a chair in philosophy at Cornell.”

Diane Keaton plays Mary, a pseudointellectual who gets involved with Allen’s character, television writer Isaac. When they first meet, however, she invokes Kierkegaard to trash his taste in cinema. Railing against Isaac’s predilection for the filmmaker Ingmar Bergman, she rants “God! You’re so the opposite. I mean, you write that absolutely fabulous television show. It’s reall funny and his view is so Scandinavian — it’s bleak, my God, I mean all that Kierkegaard, right? Real adolescent, you know, fashionable pessimism. I mean, the silence. God’s silence. Okay, okay, okay I mean I loved it when I was at Radcliffe, but you outgrow it.” Would Professor Lucas think of Kierkegaard as so…sophomoric?

While Hannah (Mia Farrow), her sisters Lee (Barbara Hershey) and Holly (Dianne Wiest), and their unfortunate husbands and lovers (Michael Caine, Max von Sydow, and Woody Allen, respectively) engage with myriad representatives of the other arts, from e.e. cummings to operas galore, philosophy only enters toward the end of the film. Hypochondriac Mickey —Woody Allen, naturally — ostensibly thrilled to be alive only a few scenes earlier, having discovered a tumor was not responsible for his sudden hearing loss, is seen exiting a university librabry, with this soliloquy:

Millions of books written on every conceivable subject by all these great minds, and, and in the end, none of 'em knows anything more about the big questions of life than I do. Ss–I read Socrates. You know, n-n-n–, this guy used to kn-knock off little Greek boys. What the hell's he got to teach me? And, and Nietzsche with his, with his Theory of Eternal Recurrence. He said that the life we live, we're gonna live over and over again the exact same way for eternity. Great. That means I, uh, I'll have to sit through the Ice Capades again. Tch. It's not worth it.

And then he unsuccessfully tries to become first a Catholic, then a Hare Krishna, before deciding the thought of looking like a shaved-head Jerry Lewis makes him too depressed.

Set in czarist Russia during the Napoleonic wars, Love and Death doesn’t reference philosophers, it practically makes up its own. Boris (Allen) and his beloved cousin, Sonja (Keaton), spar throughout the film via one pseudo-philosophical, half-satirical discussion after another. But there is this one reference, to good old Socrates, as Boris regards the prostrate form of a fictionalized Napoleon:

If I don't kill him he'll make war all through Europe. But murder… the most foul of all crimes. What would Socrates say? All those Greeks were homosexuals. Boy, they must have had some wild parties. I bet they all took a house together in Crete for the summer. A: Socrates is a man. B: All men are mortal. C: All men are Socrates. That means all men are homosexuals. Heh… I'm not a homosexual. Once, some cossacks whistled at me. I happen to have the kind of body that excites both persuasions. You know, some men are heterosexual and some men are bisexual and some men don't think about sex at all, you know… they become lawyers.

With the only two options being Socrates or a lawyer, no wonder Allen chose philosophy for his latest.