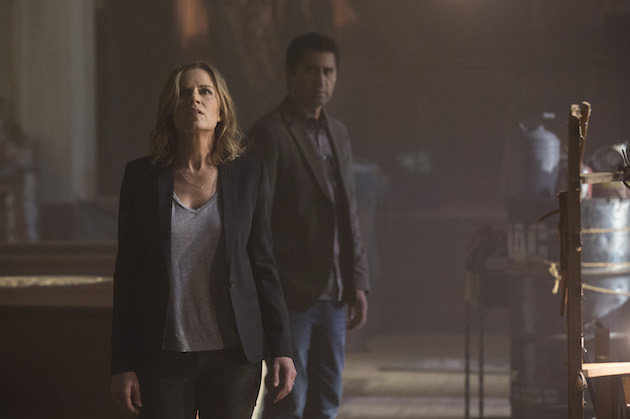 AMC’s zombie ratings colossus, The Walking Dead, wrapped up arguably their best season to date this past March with their season five finale. So it was hardly surprising when word came they’d be expanding the franchise with Fear the Walking Dead, a companion series set in Los Angeles and featuring new storylines and characters.

So what have we gleaned from the feautrette AMC just released today? Executive producer Dave Erickson says that Fear the Walking Dead will be a “family drama, first and foremost,” that evolves into a genre piece. They hope to give the show it’s own unique “fingerprint and voice,” while keeping it of a piece with the blood splattered, guts strewn world that The Walking Dead created.

One thing the new show has going for it is Kim Dickens, who plays protagonist Madison Bennett. For those of you who don’t know Dickens by name, she nearly stole Gone Girl from an equally great Rosamund Pike, playing the capable, no bullshit Detective Rhonda Boney. Dickens could carry the show herself if need be, although considering The Walking Dead’s massive fan base, this companion show has attracted plenty of fine actors.

Perhaps the biggest departure from The Walking Dead is that setting. Trading in the muggy, swampy southeast for sun-baked, sandy Southern California offers the cast and crew an opportunity to stage their dystopian, zombie-infested world in a completely new way.

“Here we have an opportunity to create a different palate,” says executive producer Greg Nicotero. “Not only in terms of how the show looks and how the actors interact with each other, but how the walkers look.”

And here is the most interesting question raised from the featurette, one we didn’t even know would be a question: how are the walkers in Fear the Walking Dead different from The Walking Dead? When this behind-the-scenes video was shot, Kim Dickens hadn’t even worked with any of the walkers yet, and had no clue what they looked like. One can assume that, because this show is set before The Walking Dead takes place, these zombies are much less decomposed, but who knows.

Robert Kirkman, the man who started this undead corpse train with the comic book series The Walking Dead, said what he’s most excited about with Fear the Walking Dead is the chance to watch these characters get stripped of their world and society “in real time,” rather than coming into the story well after the world’s gone to hell, as happened in the pilot of The Walking Dead. This likely means that the walkers in Fear the Walking Dead are going to look more like people than corpses, which will make it all the more difficult for Madison Bennett and the rest of the humans to pull the trigger or swing the ax, something we all know they're going to have to do.