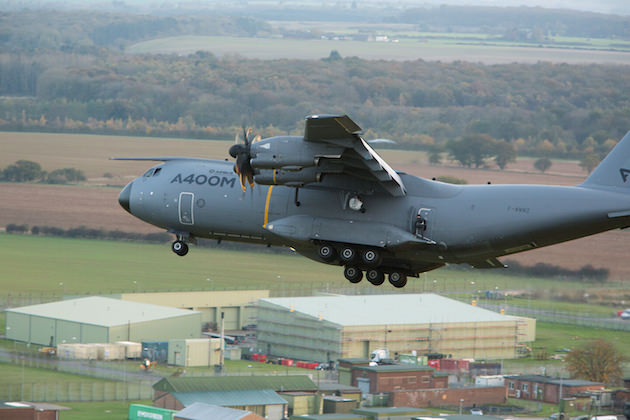 The Two Most Intense Stunts in Mission: Impossible – Rogue Nation

When it comes to stunts and action set pieces in franchise films, we want them bigger, better, faster, and more insane in each new film. From Fast & Furious to The Avengers have to deal with a monster of their own making—how to one up the last thing they did, which was often, at the time, what they thought was near the limit of what was possible. For franchises in the Marvel universe, CGI helps, but it’s not the answer to everything. Many directors of Marvel films, from The Avengers Joss Whedon to Captain America’s Russo brothers, try to get as much “in camera” as possible, meaning, practical stunts. For franchises like Fast & Furious and Mission: Impossible, it’s all about the practical stunt.

“I think a big component of how we approached this was to not talk about comparisons,” Rogue Nation director Christopher McQuarrie said in the film’s press notes. “You can see that the Torus sequence follows in the tradition of the Langley Heist that Brian De Palma did in the first film; or the A400 plane sequence follows in the tradition of the Burj Khalifa climb in Ghost Protocol; or the Morocco motorcycle chases follow in the footsteps of John Woo’s climactic chase in Mission: Impossible II. But I think trying to compare them is apples to oranges. The more important question is: am I doing the continuation of the story in Rogue Nation justice?”

And yet…one look at the Rogue Nation trailer and these photos and you get the sense that McQuarrie, Cruise (who is not just the star of this franchise but it’s most hands on producer) and the entire Rogue Nation team knew that they were competing, to an extent, with that Burj Khalifa tower stunt from Ghost Protocol. So how might you top Ethan Hunt climbing, dangling, and swinging outside the world’s tallest tower? How about have him hang onto the side of a plane as it takes it off, for starters. Then, let's top the heist scene that made Cruise an action star to begin with (the incredible break-in sequence from the first Mission: Impossible) by break into a hyper-secure, deep-water facility, without scuba gear, while holding his breath. For minutes. Here's the scene that made Cruise an action star.

And here's the scene that cements Cruise as an action legend.

The A-400 Plane Sequence

In the sequence, Hunt hangs onto the outer skin of an in-flight A-400 military transport plane. “When I’m in a plane I’m always thinking what would it be like to be out on the wing,” Cruise said in the press notes. Although one would assume such a stunt to be created digitally, it was created live, per Cruise's insistence.

This is one of the many instances where the first major hurdle to clear had to be performed by the film's producers. It's not easy getting the clearances to use an actual A400. Once permission was secured, it was all about rigging it so that Cruise wouldn't, well, die. The wind shear alone was a major danger—it pressed so violently on Cruise that they, in order to keep his eyes open, they he had to have sclera lenses fitted over them. Every single element had to be pored over and perfected by engineers.

“It’s one of my favorite film sequences of all time," said Eastwood. "What you don’t see is how much work went into it logistically. It started with our unit production manager, Tom Hayslip, fighting the battle to make sure we could even make this happen with a real A400. Then, we had a legendary crew from Airbus who we convinced to do this. Then, from my side it started with doing a ton of drawings and pre-engineering work to get Airbus to trust that we wouldn’t damage their plane. Yet once we had their trust, it came off absolutely flawlessly.”

“I couldn’t sleep the night before," Cruise said. "I was going through it all in my mind. I knew that once we took off, if something went wrong, no one could do anything. But on the day, I felt very confident with our team, with the pilot, with Wade [Eastwood, the stunt coordinator] … and when I got on the side of the plane I was very excited. I was thinking only about the audience, about the shots we were going to get, about the performance. We started taxiing and I remember we were at the end of the runway and I’m hanging on saying to Chris ‘let’s go, let’s go, let’s go.’ And suddenly, boy, that throttle goes and we are hammering down that runway like ‘holy s**t’ – the force of it! But then I was thinking ‘Now do I say my line? Is my lighting good? Am I in shadow?’ So all these other things started occupying my mind.”

Cruise did this 8 times, despite the fact that each takeoff increased the risk of something catastrophic happening. The fact that Cruise was effectively being frozen during the stunt only made it more dangerous to proceed, but they needed to get all the necessary coverage for the sequence, so they continued. 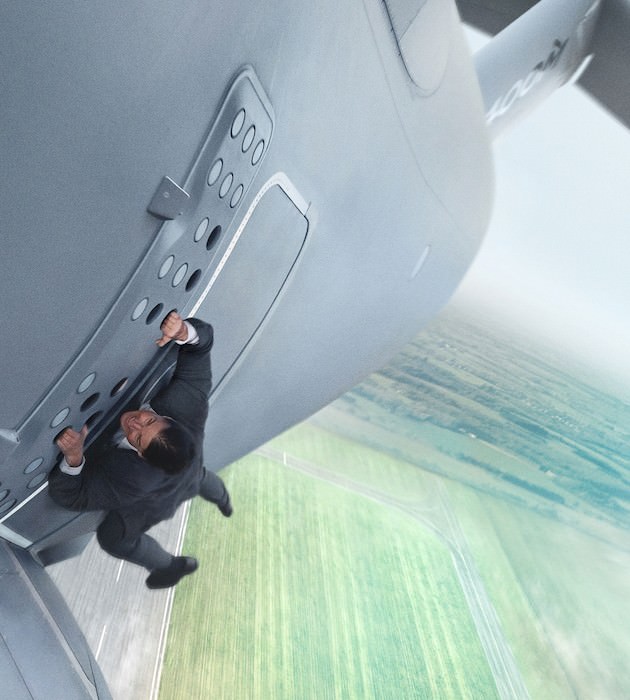 “I think the A400 may be the single most ambitious set-piece that has ever been built,” producer David Ellison says. “I’ll never forget watching the dailies of that sequence for the first time: you see the plane take off with Tom hanging on the side of it … and the camera doesn’t cut. You wait for it to cut but it never does, giving you a feeling deep in the pit of your stomach like nothing else can.”

"For me, it even surpassed the Burj Khalifa sequence in Ghost Protocol," Simon Pegg said in the press notes. "In that he was high up but he was still attached in some fashion to the ground. In this scene, he’s even higher but he was not attached to anything. He was on the outside of a plane! It was kind of mind-blowing and ridiculous. I don’t know what he’s going to do next to top that."

Here's how he topped that.

Although not as immediately jaw-dropping as the plane stunt, the work put in for the break in at the Torus facility is the more subtle, and perhaps even more dangerous work. Ethan Hunt needs to break into the Torus deep-water facility to recover a computer chip that will help him locate the film's villain.

The conceit is that Ethan Hunt needs to break into the Torus deep-water facility but cannot use scuba gear because it's too noisy. “My big question about this scene was: how can we make it even more tense for an audience — and have them experience what it’s like to hold your breath for that long, long period of time?" Cruise asked. "We had this great design for the Torus that Jim Bissell came up with and these great ideas Chris had, and I felt the performance had to stand up to that."

In the sequence, Cruise jumps off a 120-foot ledge (which he really did, of course) into a small hole that leads him underwater. Next, he has to hold his breath while he negotiates the dangers that await him below and break into the facility.

In order to credibly hold his breath under water, Cruise began training with free divers, one of the most dangerous sports in the world, in which divers reach depths of 200 feet without any equipment, risking hallucinations, blackouts, the bends—death. In order to pull off these dives, the practitioners of the sport learn how to slow their heart rates and control their internal metabolisms. Cruise trained with experts in Florida and the Cayman islands until he could dive up to 40-meters without equipment, but unlike the meditative state that free divers hope, and do, attain, Cruise would have to be doing complicated maneuvers while holding his breath.

“I have to say physically, it was without a doubt the most challenging aspect of this film,” Cruise said. “We were doing long shots and when your body is moving that much it is burning oxygen much faster so there was just a lot of physical stress. Physically what it did to me was quite interesting … what I went through doing that — it took me much longer to recover from than any other sequence.”

The scene took two weeks to shoot. According to Business Insider, stunt coordinator Eastwood said the longest Cruise was underwater was six minutes.