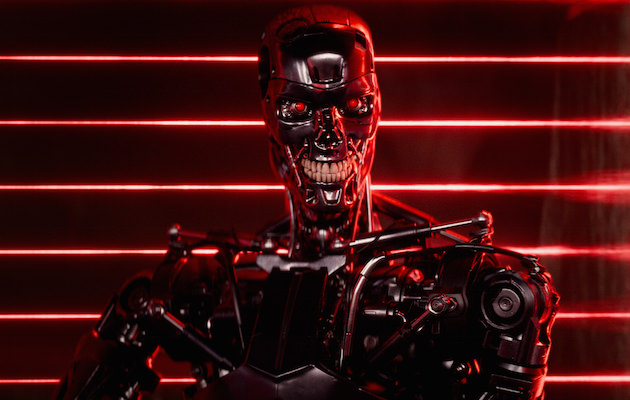 Terminator Fight Scorecard: The T-850 vs. the T-X

With the release of Terminator: Genisys today, we’ve looked at how the filmmakers aligned past, present and future to create their recent take, and presented you with a fight scorecard for the melee between Arnold Schwarzenegger’s T-800 vs. Robert Patrick’s T-1000 in the first Terminator-on-Terminator battle in T2.

A variant of the cybernetic T-800 from T2, with the same hyper-alloy combat chassis and a living tissue sheath. The T-850’s skin is more regenerative, slightly stronger and faster than it’s predecessor, and is more resistant to plasma weapons. Another major improvement is a series of action network circuits that act like a robotic equivalent to adrenalin, flooding it’s system when in combat mode so it can fight stronger opponents, like…

The first female modeled Terminator, the T-X is a further step in the evolution of the robotic assassins, even more powerful than the liquid metal T-1000. It’s protected by a crystalline ceramic armor that is interlaced with titanium and nano-fibers of carbon, allowing it to withstand more damage than any previous Terminator. Insanely strong and grotesquely agile, the T-X, aided by it’s T-1000-like mimetic polly-alloy coating (but only the outer sheath, covering the endoskeleton), it can move it’s neck in a 360 degree rotation, it’s torso in 180-degree rotation, and can run up to 50 mph for short bursts. It can crush a human spinal column with a few fingers, has steel jaws and alloy teeth that are harder than diamonds, and it’s thighs are said to create greater crushing power than an industrial hydraulic press.

Round 1 – The Pet Hospital

The T-850 comes out strong, landing that rare truck-blow as it slams into the T-X, who was busy attempting to murder Katherine Brewster (Claire Danes). Ah, but the T-X befuddles the T-850 by not caring about humans (it's protocols to protect humans, specifically the Connors and their cohorts, has long been the T-800 and 850's biggest weakness) the T-X blasts a preoccupied T-850 with a plasma round, which is a part of her available weaponry, knocking out the T-850 for a bit.

The T-X takes just a little too long getting out that plasma gun to blast poor Katharine Brewster, allowing the T-850, driving a hearse, no less, charges into the scene and shoots the T-X with bazooka, sending it flying into some poor sap's grave (destroying it, of course). The T-X is hardly fazed, which is disconcerting considering the size of the weapon it was hit with. It chases down the hearse, jumps on top of it, and swiftly rips the roof off.  A slick counterpunch by the T-850, however, which runs the car beneath a truck, not only temporarily knocking the T-X off, but also severely mauling its' plasma gun.

Despite it's size, the T-850 has a great ability to suddenly appear places. It once again surprises the T-X and blasts it repeatedly, knocking it down an elevator shaft. After this, a fantastically brutal frenzy of hand-to-hand combat between these two disparate Terminators. They pound, punch, kick, fling each other through walls and doors and floors.  The T-850 is simply bigger than the T-X (I mean, it's Arnold), and gets the T-X in a crushing full-body grip, but the T-X uses one of its many adaptations, it's ludicrous flexibility, and twists it's body around and fries the T-850's face with a torch. The T-850 gets in on the action by frying the T-X with a live cable. Only the heat has not had the same affect on our combatants—the torch to the face has really screwed up the T-850, but the T-X apparently found the live cable to be little more than an electric massage. In a Tyson-in-his-prime level punch, the T-X then knocks the T-850's head clean off, then goes to work messing with this wiring.

This is a quick round! The T-X makes one of its usual overblown entrances, arriving via helicopter, which she crashes for seemingly no reason. But here comes the T-850, in a way larger helicopter, which comes crashing down on the wreckage of the T-X's helicopter, crushing the T-X. The burning wreckage and the impact and weight of the T-850's helicopter has messed up the T-X's mimetic poly-alloy covering, and the T-X is now reducing to crawling around (an homage, no doubt, to the end of the original Terminator, when Arnold's T-800 was a bad guy, and had been rendered just a torso by Linda Hamilton's Sarah Connor). The T-X grabs John Connor's ankle, but the T-850 simply breaks the T-X's wrist. Then, for the coup de kill, the T-850 stuffs his last remaining fuel cell into the T-X's mouth, destroying them both.