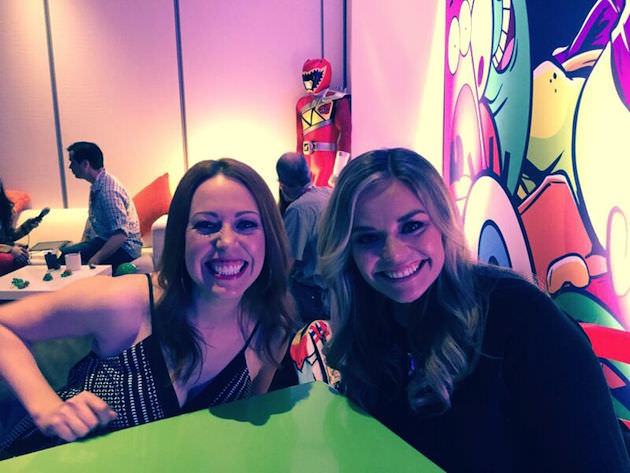 Creators and Makers, On Location, Television

San Diego Comic-Con long ago transcended its origins as a couple of hundred fans swapping comic books and now covers every kind of entertainment. This is where content creators can reach the kind of passionate fans who don’t wait for anyone else to tell them what’s cool and love to spread the word about new movies, games, and TV shows. I always describe it as the Iowa Caucuses of pop culture.

So when TV Land wants to reboot its image as a place to find the series you watched as a kid and be seen as a place to go for contemporary and very NSFW new comedies, SDCC attendees are its target audience. At a panel discussion for their three new sitcoms, emcee Michael Ian Black looked out into the crowd of 1900 and mused that it was more people than had ever watched the TV Land network. Black appears in the new Jim Gaffigan Show, based on the life of the comic who wrote the best-seller Dad is Fat chronicles his life as the father of five. Gaffigan’s wife is played by Ashley Williams, and Black plays her best friend and Gaffigan’s most frequent foil. The show premieres on July 15.

Alison Brie presented the new series Teachers, the creation of six funny women from Chicago all named Katie (or Katy or Catie). They knew each other from various comedy and improv groups and after working together on one show, decided to form their own group, called, of course, The Katydids. When someone told them they looked like teachers, they created a web series with characters based on “heightened versions of ourselves.” Cate Freedman said she got a special kick out of shooting their first episodes in the same Evanston, Illinois middle school she attended, where she had a bit of an “I told you so” moment with the school librarian who had been her particular nemesis. When the production moved to California, they had a hard time trying to find a school that looked like it was located the midwestern heartland. “Schools out here have breezeways,” Katie Thomas said in an interview.

These teachers’ biggest problems are not the students, the principal, or even each other, Jacobs and Thomas said — it is themselves.  The show is about “women in their 20’s trying to get their [act] together while teaching America’s youth.” The Katies also get a kick out of having the characters say the "things teachers wish they could say but can’t." Show runners Ian Roberts and Jay Martel spoke about what attracted them to the show.  Like their other series, Key and Peele, this is “a very distinct voice, something we haven’t seen before.”  It is also “a constant education, like a girls’ sleepover for three months.” They admitted there were “a lot of Google searches” to figure out some of the terms used by the Katies.

Impastor is the third new series, with Michael Rosenbaum (happy to have his hair back after playing Lex Luthor on Smallville) as a lowlife who is hiding out from loan sharks by pretending to be a pastor. A gay pastor. His assistant is played by adorably effervescent Less Than Perfect star Sara Rue, who explained in an interview that she can easily understand why her character does not suspect that her new boss might be a fraud. “She has never had a reason not to trust anyone before.”

As has become a tradition at Comic-Con, Warner Brothers premiered some of its new series on opening night. The two best were Supergirl, starring Melissa Benoist (Glee, Whiplash) as a young woman trying to make it who happens to be Superman’s cousin. Calista Flockhart has a blast as her tyrannical boss, and it was a blast to see Supergirl’s adoptive parents played by Helen Slater (who played Supergirl in the 1984 film, and Dean Cain, who played Superman in Lois and Clark. Lucifer is a detective series inspired by Neil Gaiman’s Sandman and the spin-off by Mike Carey. Tom Ellis is deliciously nasty as the Prince of Darkness, who decided to take some time off and run a nightclub while thoroughly enjoying every one of the seven deadly sins, with special emphasis on lust.

Long-running hit shows visit Comic-Con as well.  The Big Bang Theory is a perennial favorite, and not just because its characters are fanboys who themselves love Comic-Con. This year, the schedule featured a panel of writers from the show. Attendees began lining up four hours early, possibly because they know that The Big Bang Theory panels always have some surprise treat in the works. Past years have included a giveaway of a trip to space for an audience member and a performance of the show’s theme song by the Bare Naked Ladies. This year, two of the cast showed up unannounced, Kunal Nayyar (Raj) and Mayim Bialik (Amy). The writers talked about their real-life inspirations for some of the series’ highlights. The episode about the drone that would not work was based on a gift to series creator Chuck Lorre. He said he knew the writers on his other show, Two and a Half Men were not going to be able to fix it, so he brought it to the Big Bang Theory writer’s room.  “We confirmed it was not working,” said co-producer Bill Prady dryly.  So, they brought in an expert.  “He was 17.”  “But, he was the biggest diva,” said Nayyar. One of last season’s highlights was when Amy wrote “Little House on the Prairie fan fiction” about her relationship with Sheldon. So, the writers “shipped” some fan fiction for the audience, with Amy and Raj sharing a romantic moment, and the actors performed it to wild applause, topped only by an impromptu sing-along of the show’s famous lullaby, “Soft Kitty.” And the writers promised that the secret of the ring revealed in the last minutes of the 8th season will be revealed in the first episode of Season 9. That’s just the kind of inside information Comic-Con attendees wait in line to hear.