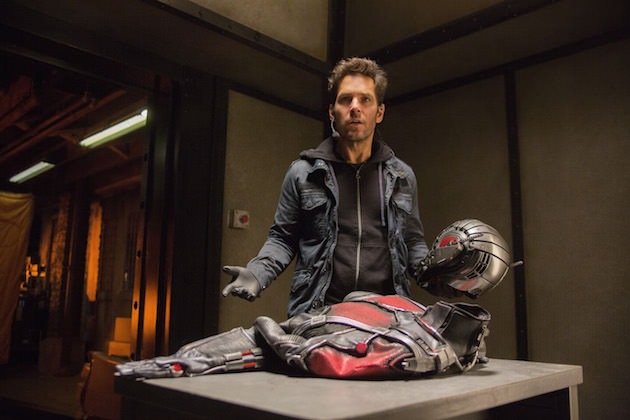 He may not be as sexy a character as billionaire geinus (and narcissist) Tony Stark, as irresistibly rococo as the Hulk, or as satisfyingly kick-ass as the Black Widow, but you could argue none of these beloved Avengers are more important than Dr. Pym (Michael Douglas), the original Ant-Man, and the man he puts in his miraculous suit, thief-turned-hero, Scott Lang (Paul Rudd).

As one of the original founders of the Avengers, and “one of the smartest people in the Marvel universe,” as Marvel head honcho Kevin Feige explains in this featurette, it’s probably high time to give Hank Pym and his protegé, Lang, their due (Marvel is certainly hoping you do just that starting a week from this Friday).

So what makes the Ant-Man suit so special? When Lang becomes Ant-Man, he’s not only harnessing the super strength of an ant (consider: a recent study by researchers at Ohio State University and published in the Journal of Biomechanics found that the common American field ant has a neck joint that can withstand pressure up to 5,000 times greater than it’s own body weight), he can also communicate with other ants, using them to help him battle his nemesis, Yellow Jacket (Cory Stoll), as well as anyone else who gets in his way. Thanks to Pym's technology, there are a ton of different types of ants that Lang can call upon—there’s a reason they’re considered perhaps the most successful insects on earth: ants that fly, ants that are super fast, ants that have jobs (carpenter ants, harvester ants, etc.), and even ants that colonize other ant nests and enslave their workers (Amazon ants, although it's doubtful they’re in the film).

The point is, as out of place as you might find the aging Hank Pym, the seemingly unthreatening Scott Lang and the incredibly shrinking Ant-man suit in a Marvel universe that includes a god with a magical hammer and a green monster that can bring down a skyscraper with a few uppercuts, Pym, Lang and their army of ants not only belongs, but is a huge part of what brought them together in the first place (which we’ll learn more about in the film).

And remember, Joss Whedon and crew changed the creator of Ultron in the most recent Avengers: Age of Ultron to make the titular nefarious artificial intelligence a Stark/Banner production, but in the comics, it was Pym who was responsible for creating a sentient AI that nearly destroyed the world. When Ant-Man opens on July 17th, the littlest Avenger of all is finally getting his due.