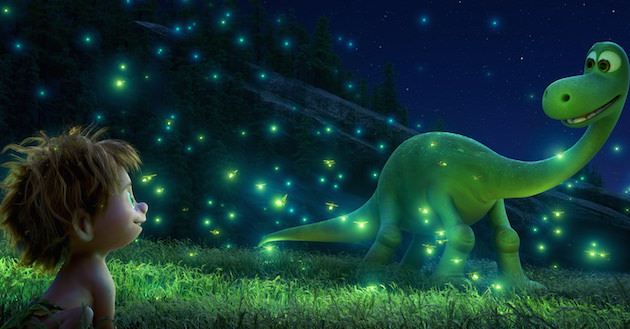 Need a Midweek Smile? Pixar’s The Good Dinosaur Trailer & This Song Will Help

Need a midweek boost? Check out Pixar’s smile inducing trailer for The Good Dinosaur. The stunning visuals of glittering stars (the kind in the sky) and tumbling rocks make us forget that this movie is in fact animated – it's got that Pixar quality of being almost photo-realistic and yet entirely dreamlike – it is the kind of world we wished we lived in, no boring desks and long lines for a Mochachino.

In this world lives an Apatosaurus dinosaur named Arlo (voiced by Raymond Ochoa) and a 6/7-year-old caveboy named Spot (voiced by Jack Bright) whose budding friendship warm even the coldest of hearts. Arlo loses his way and with the help of Spot, they share a buddy adventure while helping Arlo’s get home to his tribe, helping each other survive the perilous journey along the way. Okay, you have to suspend a bit of reality; in this version of evolution, humans and dinosaurs do co-exist. The Good Dinosaur has A-list voice performances, with Jeffrey Wright, Frances McDormand, Marcus Scribner, Steve Zahn, Sam Elliott, A.J. Buckley and Anna Paquin rounding out the cast.

While the trailer visuals are stunning and the story is heartfelt, the soundtrack induces goose bumps without a word being spoken. We've all had that moment during a film or trailer where you just have to know the name of the song (thanks to Shazam and Google, this is no longer as maddening as it once was)—the song in The Good Dinosaur trailer is “Crystals,” by Of Monsters and Men. It perfectly captures the whimsy, playfulness and heartwarming essence of the film that we know “The Good Dinosaur” is sure to be.  (Watch the video for the song here.)

The Good Dinosaur is due out Thanksgiving.