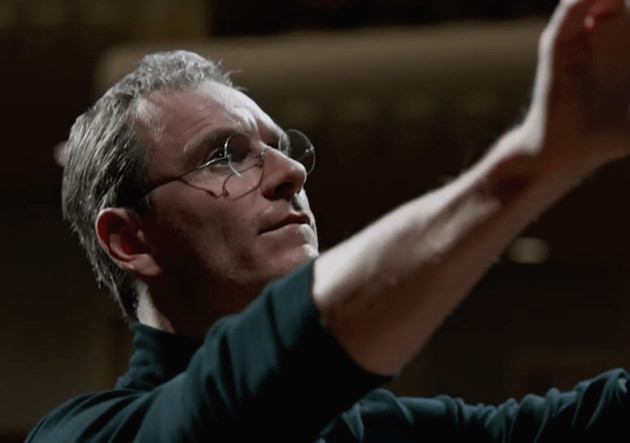 A great opening monologue, a great beat beneath it, and images of the legions of Apple fans (and worshippers) starts yet another fantastic new trailer released this week. In this new trailer for director Danny Boyle and screenwriter Aaron Sorkin's Steve Jobs, Apple’s tech genius Steve Wozniak, played by Seth Rogen, asks his mercurial, infuriating mastermind of a partner, Steve Jobs (Fassbender), the question we have all wondered about Jobs – “What do you do?” He goes on to list what Jobs' isn't—"You're not an engineer, you're not a designer, you can't put a hammer to a nail…I built the circuit board, the graphical interface was stolen, so how come, ten times in a day, I read 'Steve Jobs is a genius'? What do you do?'" Jobs reply is simply and succinct, “Musicians play their instruments. I play the orchestra.”

The orchestra, it turns out, wasn't just his often exasperated employees, but a huge percentage of the smart phone loving world, Jobs playing us all. The metaphor helps explain the meteoric rise of man and the machines he didn't himself built, but his vision for what they could become (and why) turned Apple into one of the nation’s most iconic brands—ever. Fassbender, whose trim built and angular face are eerily Jobsian, stands as the maestro before a packed houses of his ravenous fans. Sometimes you really do have to remind yourself that this guy wasn't actually a rock star, but the head of a company.

But in seeking its truth, the film is not completely flattering to Jobs. Sorkin and Boyle do not shy away from some of Jobs’ more questionable personality traits. The trailer touches on Jobs's troubled relationship with his then-girlfriend and daughter, strained relationships at work, his arrogance, relentlessly intensity and occasional blatant disregard for others when they stood in the way of what he wanted to accomplish. The film also hones in on Jobs' preternatural dramatic showmanship, one that became as much a part of Apple's culture as their "Think Different" motto.

From what we can garner from this first trailer, Boyle and Sorkin have succeeded in capturing the essence of a man who was, and continues to be, an enigma, played by an actor who appears, on first blush, to be the perfect match.