Few modern authors command the kind of intense adoration like the late David Foster Wallace. And among his many pieces of fiction and journalism (want to kill time today at work in the best way possible? Read this, or this, or this), the work that still inspires the most articles, reviews, conversations, critiques, and wonder is his opus, Infinite Jest.

Infinite Jest has inspired deeply serious, text book-length analyses (check out the list here) as well as deeply stoned dorm room discussions. The Byzantine plot and seemingly endless footnotes have been credited by some to auger the future of the internet and our infinitely hyperlinked world. The title of the book (taken from a line in Hamlet) refers to a fatally seductive film that is so entertaining, those who watch it can never turn away (or eat, or sleep)…and so they die. As Foster told journalist David Lipsky, whose book "Although of Course You End Up Becoming Yourself" is the basis for Friday's release The End of the Tour, which tracks a road trip the two took at the end of Wallace's Infinite Jest tour, Wallace worried about a future in which people sat alone, in front of their technology or entertainment, “immersed in pure unalloyed pleasure.” Prescience is another aspect of Infinite Jest and Wallace himself that mystifies people.

Infinite Jest has generated flowcharts and geolocation tours, a music video by a critically acclaimed band, and hundreds, if not thousands, of reviews. Some of the reviews are passionately positive, some of them not so much (and some of his harshest reviews coming from himself). When he committed suicide in 2008, his stature and his legacy only grew, turning Wallace into the sort of posthumously oversized famous figure he worried about, thoughtfully and in-depth in Lipsky's book and elsewhere, of becoming in life.

So it's understandable, considering his queasiness with fame in the first place, that a whole lot of people (to say nothing of Wallace's widow, Karen Green, or his estate) were somewhere on the spectrum between worried and outraged that there would be a film about him. Although to be fair, The End of the Tour is both about Wallace at a very particular point in his life, and also about Lipsky, the young reporter on assignment for Rolling Stone. While Rolling Stone never published the interview between Lipsy and Wallace, the transcripts from this road trip became the basis for Lipsky's book. In it the young journalist and the young literary celebrity travel the Midwest sharing fast food, bon mots, and thoughts on everything from editing the book to family, friends, romantic relationships, to the very fame Wallace worried about embracing.

Once the film became a reality, and then went into production, a photo leaked on Twitter of Jason Segel in the unenviable role of Wallace. The reaction was, as you can imagine, very educated and thoughtful. Or the opposite of that. Months later, The End of the Tour premiered at Sundance, and while the rest isn't quite history yet, the reaction and reviews have been nearly unanimously positive. The Hollywood Reporter's David Rooney wrote, "This is no conventional biodrama about the tortured artist, but very much the film that lovers of Wallace's dazzingly perspicacious fiction and essays would want."

One of the very first people to start the long process of turning Lipsky's book into a film was producer David Kanter. In early 2011, Kanter was sitting in his office when he got a phone call from his friend, Nick Harris, an agent in the book department at ICM. "He said he had a book by David Lipsky, about a road trip that Lipsky took with David Foster Wallace in 1996. He said, 'I don’t know anybody who would think this is a movie, but I think you’ll like.'"

Kanter was about 12 pages into the book when he knew he wanted to make this movie. "It was beautifully written by Lipsky, very self effacing, and then I when started reading the actual transcripts, the meat of it, I was convinced that my longtime friend and client Donald Margulies would respond to this material."

Kanter sent the book to Marguiles, a Pulitzer Prize winning playwright. "In the beginning I wrote to him and said, this could be a play, this could be something for HBO, this could be a small movie, hell, it could be a puppet show," Kanter says. "The next day, he said, 'I think this a movie that I have to write.' It encompassed everything Donald's life and writing has been about. A deep reflection of the nature and meaning of creative process, the ethics of storytelling, how to cope with life, depression, elation, the ecstasy of the creative process, it was all there. He just completely flowed into it."

"The essence of the story is the relationship of these two guys and what they draw from each other and cause each other to express," Kanter says. "How they forced each other to examine and actualize their feelings. And how concentrated their relationship was over five days. And it was beautifully wrapped up in the telling of the story of how he came to uncover the tapes from these interviews of an article that was never published. That’s a story, that’s a movie, it was just a question of scale," Kanter says. "Donald reinforced this and amplified it, this is a story I want to see because these people are talking about things that really matter to me. There’s very little book gossip, it’s really not about that, it’s not a biopic, it’s a story about how, in five days, does a complex flower open, blossom, and then how does it die. That’s compelling to the human psyche." 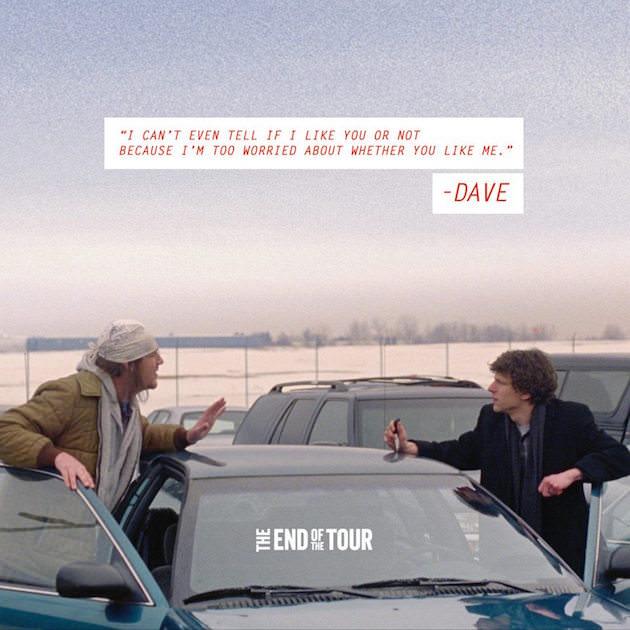 Kanter arranged for Marguiles and Lipsky to meet. They hit it off. From there, it took roughly a year of false starts for Kanter to raise the development money to option the book and hire Marguiles to write the script. Meanwhile, Kanter enlisted the help his colleague Matt DeRoss, who shared the book with his friend James Dahl. Dahl had some money to develop high end films. Things began coming together.

Hanging over the film is, of course, Wallace himself, and more specifically his suicide. "We don’t portray the suicide or anything of David Foster Wallace beyond the four days he and Lipsky spent together," Kanter says. "The film is cradled in David Lipsky’s narrative of how he decided to go and get the interview, how he had to push the people at Rolling Stone to go do it, how he approached Wallace at home, and then we move back and forth in time, using Robert Siegel announcing Wallace's death on NPR, which occasioned a memorial that Lipsky gave on NPR, which, ironically, occasioned an article on Rolling Stone, which then lead to the creation of Lipsky's book. So those steps are capitulated as we cradle the longest part of the movie, the four days they spent together," Kanter says. "I’d use the metaphor of a nesting doll, the pieces all fit together because they resemble each other, which is one of the reasons the book captured me. We don’t get into anything prurient, there’s no effort to do a biographical story. We’ve gone back in time to put ourselves in the shoes of these two of men." 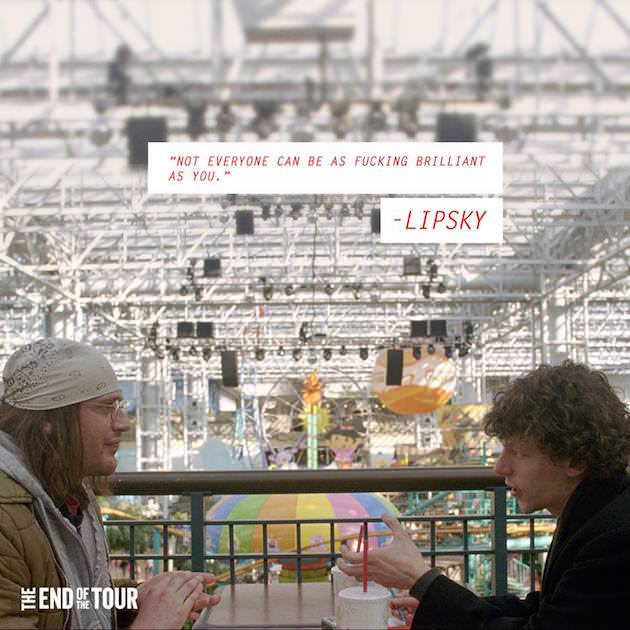 Of the many potential pitfalls surrounding a film about a deceased, legendary author with such a rabid fan base, none were larger than casting Wallace. "The responsibility for that decision is in [director] James Ponsoldt’s hands," Kanter says. "Jason [Segel] was suggested to me by his agent, who I’ve known forever. We’d been talking internally about Jason, but we were pursuing the Lipsky casting at that point (they eventually cast Jesse Eisenberg), then Sharon Jackson, Jason's agent, who I adore, called me and in her very particular way said, 'Jason’s doing this.' I laughed, and said 'I think this is a great idea,' which is what I say when I’m backed up against a wall, but I said he and James Ponsoldt should meet. So that was arranged, and Jason had prepared himself for the meeting with real dedication and professionalism and passion, and James called myself and DeRoss and others and said, 'He’s fantastic, he’s amazing, he’s it.'

Kanter says that before they cast Segel, the one thing they became sure they needed in the Wallace casting was an American actor. "The reason for that is, you’ll see a moment when they’re really deeply engaged in conversation, and Wallace has overcome his reluctance to engage in the fame business, and he just starts to light up and really go, and there's something so particularly American about his condition, his existential situation. So to be able to examine it, we were striving for some sort of authenticity, although we didn’t articulate it that way, but as the process went on we began to be able to talk about it. So finding an American actor was really important. That consciousness is particularly American, or shared by other American intellectuals." 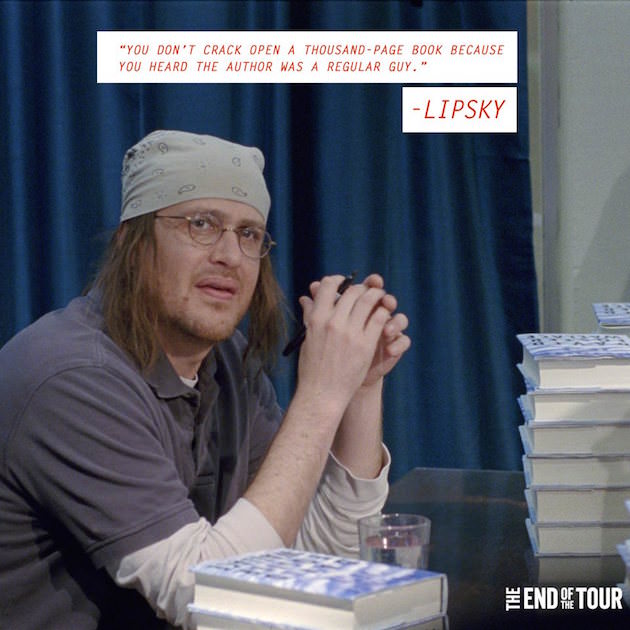 Before they began production, Kanter and the producing team were arranging for a package to be seen for the foreign sales folks in Berlin. "It was an unusual piece of material, to say the least," Kanter says. "It wasn’t a genre piece, it wasn’t comedy, it wasn’t a drama, so we begged, borrowed and stole to do a little Berlin promotion piece which was Jesse and Jason doing a two minute promo piece, just for the trade. Those two guys showed up in the morning, Jason had picked up Jesse in his car, and that was the first time they met, and by the time they emerged from the car, they’d already started to find purchase on their characters. It was already happening."

You can see their work this Friday, when The End of the Tour hits theaters. The rest will be history.

Featured image: L-r: Jesse Eisenberg is David Lipsky, and Jason Segel is David Foster Wallace in 'The End of the Tour.' Courtesy A24.

TAGSA24 Films The End of the Tour