Here’s How They Created Minionese, the Language of the Minions

In Universal Pictures' Minions, the three lead Minions are Kevin, the “big brother,” protector and leader, Stuart, the rebellious “middle brother,” and Bob, the innocent, eager “little brother” who loves everyone and everything. They're on a mission to find a new master (this is a prequel to Despicable Me and Despicable Me 2, so they haven't met Gru yet), a mission they've been on, it turns out, for centuries. They communicate through their Buster Keaton-level physical comedy and a language called Minionese. They're all voiced by the same man, director Pierre Coffin, creator of their language.

So what, exactly, is Minionese? It's the lexical version of a hearty stew, made up of words from multiple languages, expressed not only vocally, but through the Minions' physical comedy. While the creation of Minionese makes narrative sense now that the Minions have a rich backstory (more on that in a bit), Coffin's goal was for the audience to understand Minionese without actually knowing the exact verbiage through the Minions huge range of vocal melodies and inflections, as well as their physical actions. First, however, he needed to ground Minionese in it's own personal history, and that was achieved by realizing the Minions have been around a lot longer than we have.

Language Stew — Why Minionese is Made up of Several Languages

The Minions have been around for a long, long time, and, as a nomadic tribe in search of their next master, have absorbed bits of many languages as they've traversed the globe. The etymology of Minionese includes the basics of ancient Egyptian (they worked for the Pharaoh), a dash of high-society French (they backed Napoleon), some proper Transylvanian (from their time serving Count Dracula), all the way back to the grunts and grrrs of early Homo sapiens. The fact that they inadvertently topple every master they serve, up until Gru, explains why their language is so rich and varied—they are always on the move again after putting an end to the regime of whatever tyrannical master they had chosen. With this history spelled out, Coffin could then plunge into developing the unique vocalizations and intonations that differentiate Kevin, Stuart and Bob, as well as flesh out Minionese.

“You don’t understand their words, you don’t understand their grammar, but you do understand when they’re in a position of conflict, if they’re sad or if they’re happy,” Coffin said in the production notes. First, in order to help him visualize how these characters would physicalize their language, he looked to his heroes in the silent film era for guidance. “When you look at the history of films, they start out as being totally mute with actors like Charlie Chaplin and Buster Keaton. Those guys were the best storytellers ever, and it goes across generations," Coffin said. "I showed my kids The Gold Rush, and they loved it. There are no words in it, obviously, but they were just hooked on the visuals. Everything was so timed and well-executed without any language. The Minions are all about that. They’re this legacy of silent films, except that we stuck ridiculous words on them.”

Because the inspiration for those ridiculous words that Coffin creates are rooted in real languages, he could turn to a set of guides we all have access to, usually stuffed in a drawer in our kitchen. “Every time I got stuck in a sequence or in a shot where I need to express something, I have my Indian or Chinese menu handy. I also know a little bit of Spanish, Italian, Indonesian and Japanese. So I have all these sources of inspiration for their words. I just pick one that doesn’t express something by the meaning, but rather the melody of the words.” 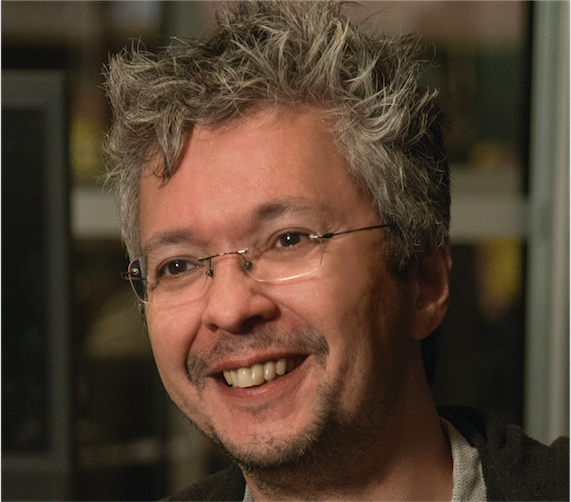 Illumination Entertainment CEO and founder Chris Meledandri believes Coffin is, consciously or not, creating an actual language. “Pierre would probably tell you that the language is all gibberish, but I have my own theory," he said in the production notes. "I’ve watched him over the course of these three movies, and I’m beginning to see linguistic patterns. I actually think he’s creating a language. He’ll deny it, but I’m convinced that he is. It’s a language that, for all of us audience members, we’re beginning to understand.”

Now that they’re the stars of their own film, the three Minions needed to have their own distinct personalities, and the filmmakers realized the best way to do that would be through their physical comedy and their unique sounds. As the leader and protector of the group, Kevin sounds more adult, even admonishing, when he feels his younger siblings are being too silly or are distracted when they need to focus. As the middle child, Stuart’s sound is much more teenager-like, laissez-faire, evidenced by his reliance on “meh.” As the little guy in the group, Bob’s vocals are much more childlike. Bob’s happy, eager, excitable, but also easily frightened, which you hear in his many gasps and “ooooooh”s. 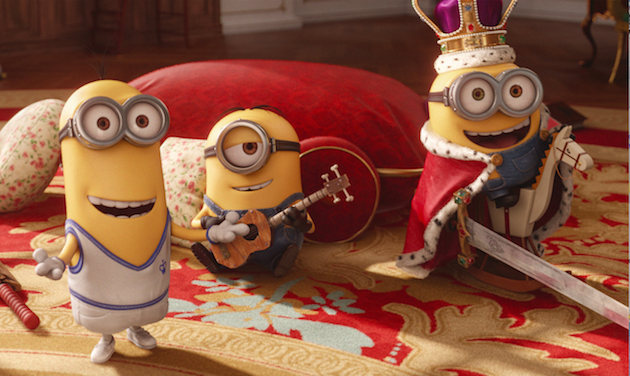 Sandra Bullock, who lends her voice to Scarlett Overkill,  "the first female super-villain," believes that Coffin and his team have created a language that is totally accessible. “What I love about the Minions is that you can’t really understand them, but you absolutely feel what they’re saying," she said in the production notes. "They emote with so much emotion that the language barrier doesn’t exist.” Evoking Scarlet, she pauses, “We had an unspoken, beautiful relationship.”

The Minions language doesn’t only serve the script and the performances, it was also a part of the score. Composer Heitor Pereira suggested that the Minions language would be wonderful to incorporate into the score, having a choir sing throughout the film in their language.

“I’m from Brazil, but the first time I heard The Beatles, I didn’t have a clue what they were singing about,” Pereira said in the press notes. “But the rhythm and the waves of the sounds that the language created somehow already put me in a certain frame of mind. I find that the same goes with the Minions’ language.”