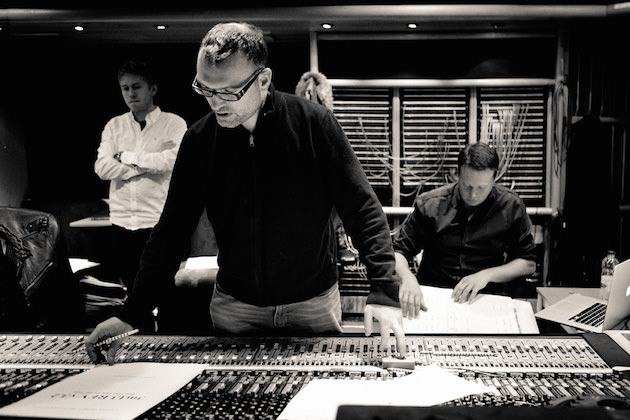 We spoke to Jackman about his work, specifically on last week's release, Pixels, the alien invasion-in-the-form-of-classic-arcade-game-characters film, how he manages to marry music to massive action set pieces, and more.

What's the approach to scoring a film about murderous 1980s arcade characters? How do you even begin putting music to that, as opposed to scoring, say, Captain America?

Funny thing is, I think it’s not really specific to Pixels, because on almost every movie you work on, unless you do a sequel, you end up pretty much creating a unique language for each film anyway. You’re working with different directors, so that pretty much happens every time. What often happens to me is right when you’re about done, right as it’s getting quicker to write because it’s all coming together and you feel in control, the film’s over and then on the next film none of that applies! Working with Christopher Columbus for Pixels meant I would get to be symphonic, and I'd have to make sure I got the themes right and a coherent plan with melodies and harmonies.

Is there a through-line for you musically, though, when you're working on a big action film?

What about playing around with the sounds from those iconic games?

That was an interesting process. Putting together a real combo of synth elements was a bit of a little guilty pleasure for me. I got to do a 80s-style production in some spots, but that all ended up in the credits. Chris, who’s a great lover of action adventure scores of the 80s, felt like since we have the iconic images and sound effects of those games, with a beefed up version of Pac Man gobbling away, if we also do that with the score, that’s one hat tip too many. In the beginning when you get the invasion, there’s a bit of mystery, the mother ship descends through the clouds and the little arcade bits start coming out, and it turned out to be more effective to play it straight and more referent to Close Encounters of the Third Kind, otherwise it gets goofy. In Wreck-It Ralph, I could do that 8-bit sound, but with this one we wanted to enjoy the full resources of the symphonic score.

What were some of your touchstones for scoring this film aside from Close Encounters of the Third Kind?

Ghostbuters, for one, which used great period music and then had the classic orchestral score. The important part is the invasion part, and, right towards the end of the film, as an echo from the first invasion, you get the full on invasion of hundreds of thousands of these arcade characters running amok in New York City, and far from playing that goofy, it’s actually closer to Darth Vader's theme, the Imperial March. My pitch to Chris was we should treat the final invasion like the tanks rolling into Poland, just play it as a dead straight invasion queue, in the same way they'd do it if the Storm Troopers were flooding the rebel base, without a whiff of comedy about it.

Touching on Kingsman: The Secret Service for a second—were you surprised it was such a hit?

I was a bit surprised because it’s R-rated, and it doesn’t pull its' punches at all. It has a lot of things a nervous Hollywood executive might worry abotu, and Matthew Vaughn, despite being provocative and somewhat outspoken, is, actually, very skillful at making popular, entertaining films. He's just naturally someone who loves making these types of films, with a pop touch, and it’s not cynical in the slightest. The sort of movies he makes are the sort of films he’d want to see. I remember talking to Jeffrey Katzenberg, who really couldn’t be further from Matthew, and he said, “I thought it was very entertaining!” Even though they’re miles apart in what they do, Jeffrey was recognizing that, as in Kick-Ass, it’s somehow not offensive and is very entertaining. The other thing about Matthew's films is, even though you get a lot of heavy stuff going on screen, they feel sort of positive and optimistic. Some of the stuff in Kingsman and Kick-Ass is pretty gruesome, but they always feel positive to me. He once said to me, “Whenever you’re at a creative crossroads, whatever it is, just be bold.”

Having already scored Captain America: The Winter Soldier, what can you tell us about the upcoming Civil War?

I haven’t started on it yet. The only thing I would say is that the Russos are brilliant. If Winter Soldier is anything to go by, they have a very strong creative voice. They manage to operate inside the Marvel franchise without disrupting it unnecessarily, but manage to imprint their own angle on it.

What is it about working with the Russo brothers you enjoy?

They're always referencing 70s political thrillers, and they’ve got a lot of creative discipline. I don’t doubt they will very creatively navigate a really disciplined story with substance, while also having all the things you expect in a Marvel film. I don’t think they’ll drown you in action set pieces, but they’ll have that satisfying level of intrigue and action.

Winter Soldier was surprisingly thoughtful, perhaps the most thoughtful of the big Marvel films to date.

Yes, it’s a massive action film, but it’s also a film about what government should do about preemptive military action, and where the fine line is between a free country and the use of technology to suppress any action against your nation before it even exists. You’ve got Fury (Samuel L. Jackson) who relies on these technologies, and you've got Cap (Chris Evans) who appreciates the intention of it but has a fundamental disagreement with that ideology, and believes it shouldn’t be used to preemptively attack. In WWII, when Captain America was first around, there was a general existential threat to America that really did exist. This is why the Russo’s are clever; there are all these little resonances to modern politics in Winter Soldier. Preemptive action versus civil rights, with citizens not wanting to be monitored, but, on the other hand, will be upset if there’s a hideous terrorist attack and if only the government had monitored emails and phones and stopped it before it happened. Instead of a superhero movie seeming entirely fantastical, they bring these other elements that are grounded and real.

Going back to Pixels, do you have a favorite moment?

Probably the big invasion in the end, from my idea of not doing wall to wall action music, but rather to give it this almost high brow invasion music, and Chris was all over it. I can’t remember the last time I was able to do that…in a modern live action film you don’t get to reference the Imperial March very often.