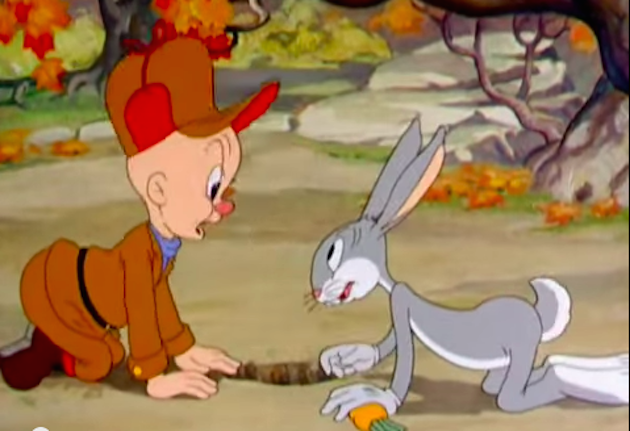 It was seventy-five years ago today that Warner Bros. released A Wild Hare, introducing the irrepressible Bugs Bunny (and the utterly repressible Elmer Fudd) to the world in his first official animated short.

As the New York Times reported earlier today, primitive versions of Bugs had appeared in earlier Warner cartoons, but A Wild Hare brought a fully realized, wise-cracking, street-smart Bugs to viewers for the first time.

The full length A Wild Hare is eight-minutes long, and showcases a large amount of Bugs’ trademarks—the white gloves, the cotton-tail, the endlessly inventive ways he embarrasses Fudd. They are the perfect pair, trickster and foil, a sort of animated Fred Astaire and Ginger Rogers (only if one of those elegant people were constantly tripping and being humiliated). As the Times noted, it’s so impossible to imagine one without the other that Warner even explored the meaninglessness of Fudd’s life without his pursuit of Bugs in The Old Grey Hare.

Now word comes that Elmer Fudd is set to retire. In a new series of cartoons coming to the Boomerang Network entitled Wabbit — A Looney Toons Production, Bugs’ grace under pressure will be tested by a new cast of antagonists.  It’s hard to imagine any will be as woefully easy to trick, and as lovable, as the hapless Fudd, but, like peace, we’re always willing to give Bugs a chance.