I’m standing in a dimly lit bar located two floors below street level in the Shibuya district of Tokyo, while a man clad in black is rapidly approaching while swinging a Samurai sword directly towards my neck.

The weapon of note is being welded by expert swordsman Tetsuro Shimaguchi, best known for his featured role as Crazy 88’s “Miki”, the right-hand minion of Lucy Liu’s character O-Ren Ishi in Quentin Tarantino's 2003/2004 opus Kill Bill Vol. 1 and Vol. 2, in which he pulled double duty as both actor and behind-the-scenes choreographer, crafting the sword fights (of which there are many) in the film.

Shimaguchi’s full front assault is actually in response to a question late in our conversation on the most expedient blow to decapitate an enemy, and his skills have not atrophied in the slightest since his big screen break as the sharp blade comes to a smooth standstill a very safe few inches away from my jugular.

Since his role in the iconic film franchise, the 45 year-old Japanese native considers it his mission to spread the gospel of the Samurai culture and has been touring the world with Kamui, a performance troupe he founded in 2012 to demonstrate for audiences a mixture of classic and modern swordplay techniques. It’s fair to say from his up-close demonstration, the man loves his work.

Prior to the near vivisection, Shimaguchi agreed to sit down and compare the differences between Hollywood and Japanese filmmaking, reveal a few secrets from the set of Kill Bill, explain why Samuel L. Jackson has excellent taste and lend his expert eye to rank the quality of swordsmanship as the Jedi battle in a galaxy far, far away — for his ranking of Top 5 Star Wars lightsaber fights, check out the post here. 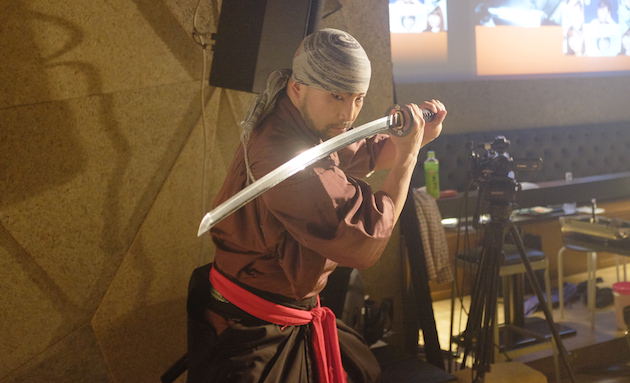 Let’s start with your experience in Kill Bill. You were initially hired just to do the choreography but ended up acting. How did that come about?

So you know the legendary sword master in the movie? The one who makes the sword in Okinawa? So basically he and Quentin were friends, and he was like “Did you know that this man who is also in Los Angeles is trying to make it as a sword guy?’ Quentin was like, “Really…?” And no way was I expected to be in the film. Only teaching. On the second day of training, Quentin saw me move and the look I had  — and that’s when Quentin fell.

It was the look in your eyes?

Yes, it was like “You have Samurai eyes." So, I’m “No. 1 Miki” and Master is Lucy Lui. So there’s a scene where Lucy is like, “Miki!”, —  and she’s about to send him. And Quentin absolutely had to have the scene of him jumping down and getting down to business. Absolutely had to have it.

Clearly, you made an impact on camera but what was your focus behind the scenes setting up the fight choreography?

So obviously there’s very different styles between kung fu and karate, or even sword fighting, so you really have to take that into account. I coached Uma Thurman and Lucy Liu in their movement to respect their own cultures —  Lucy Liu, of course is playing a Japanese girl who is Chinese.

What were was the direction that Quentin Tarantino gave you?

So the thing he wanted to get across very fervently was “The Look.” And you can tell how Uma Thurman squints. So, there was a lot of coaching involved, and that’s where I came in. On my days off, I came in to give Lucy Liu some advice. There’s a part where Lucy Liu gets her katana sheath cut in half, and the look that she slowly gave after that happened was something that she kept wanting to perfect. It’s really about those kind of specific attention to detail! Nailing specific moves or certain movements —  I’m a perfectionist who insisted on getting those details right.

How was collaborating with Quentin Tarantino as a director?

So Quentin just said, “You do it all. I have full trust in you.” So again, since there was the Chinese part and there was also a Japanese part in the movie itself, and I was in charge of directing the Japanese movements. And then there’s a wire action, like “Crouching Tiger, Hidden Dragon”, so there was another specialist who came from China who was more oriented around that kind of style, and directed the Chinese people. The Snow Garden scene was entirely mine and inside the house was directed with lots of my help.

So Tarantino for that last scene, towards the end, where Lucy Liu gets her head chopped  — he was just like “Do this!” Then I asked Quentin Tarantino to please just film me from any angle you want; we’ll do our thing. And that’s how we did it.

How did Kill Bill impact your career after it was released?

It was a huge impact. I was able to be selective —  Kill Bill was like getting the biggest stamp in a passport. Its so famous that anybody instantly recognizes it, so that recognition has been unmatched compared to the rest of my work, despite going on world tours.

Why do you think audiences continue to be so enthralled by swordplay in movies and television?

In Japan, it is in the Japanese DNA. It’s embedded in the country. Japanese culture is maybe more susceptible or has feelings or a certain pathos for more humanistic actions, compared to say, the American counterpart of straight machine guns, which is technically a second piece and not the human part. Guns are an item for killing. A sword is the spirit. It is a certain lifestyle but more importantly it is that spirit garnished through the hands. The katana becomes the arm, it becomes part of the human. It won’t be a separate piece like the gun. The sword is able to evoke more passion and pathos compared to a machine gun.

Give us an example of a film that you feel embodies that best.

You know Akira Kurosawa? Tsubaki Sanjuro? Lone Wolf and Cub!. That’s a movie that Samuel L. Jackson really enjoyed. I performed in Samuel Jackson’s house, and he has a huge collection of Japanese movies that are Samurai oriented that not many people know about. We bonded over the fact that this Lone Wolf movie was not only one of my favorite movies, but one of Samuel’s favorite movies. In terms of recent movies, it’s pretty difficult. Recently, Japanese movies are not performing to the standards of Western or international productions. Foreign movies are actually catching up and doing a better job recently than Japanese ones. 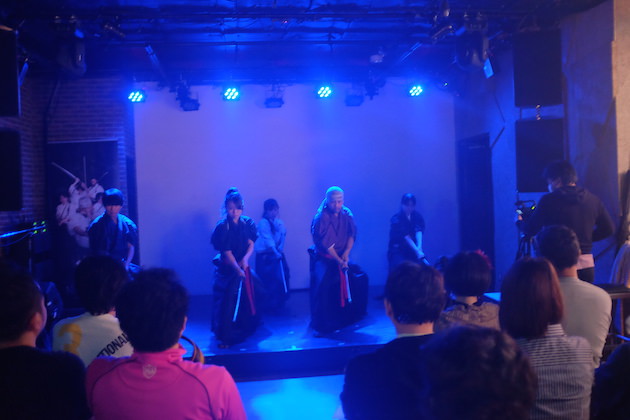 Why do you think that is?

So first of all, the difference in classical productions, the kind of atmosphere or environment it was filmed in is very different from today. Back in the day, not only were the staff and the participants super passionate — they would risk their lives to produce it, in terms of dangerous setting for the scenes. That has changed and there has become a looseness in the dedication to it. The idea of a samurai today has become a phase or fad, but Samurai back in the day was something serious. It’s interesting to see that when foreign people hear about samurai, they’re focused on the more serious aspect of it, whereas Japanese people aren't any longer.

What’s the message that you want to convey?

I’d like Hollywood to wait as I and other people like me will be bringing the true virtues [of samurai], whether it’s swordsmanship or along the lines of martial arts performance, there will be better things coming out of Japan heading towards Hollywood.

What do you think is the difference between moviemaking in Japan versus Hollywood?

Scale. I have much respect for Hollywood and its size and its greatness. There’s a lot of pressure in Japan. Stress. So even on set and during the production of the movie, it still feels like a trial or some kind of audition during the filming. It’s hard to really focus when you’re being judged 24/7, whether it’s during an audition, during a filming, or during a normal life. It’s very much different to say that of a Hollywood set. You get to be who you’re trying to be.

I was so happy and fortunate to be able to be on the set of a Quentin Tarantino film and to have that flexibility to be me. It’s really the difference between Japan versus America.

At the most basic level, in Japan sponsors have a huge say in not only your story but your characters, your storyline, and the way things develop. Quentin was able to have a strong hold on his idea. He was able to do everything at his own pace, his own will and his own vision. That would get clouded in Japan based on the people that would want to have their hand in everything, based on the money they were giving. I give you money, I get to have a say in it.

What do you define as the qualities of a Samurai?

Spirit. Technique. Body. Balance. These principles encompass not only Samurais but any performing arts or martial arts. That is Japan.

This interview has been edited for clarity and length. Translation provided by Adrian Bertrand.