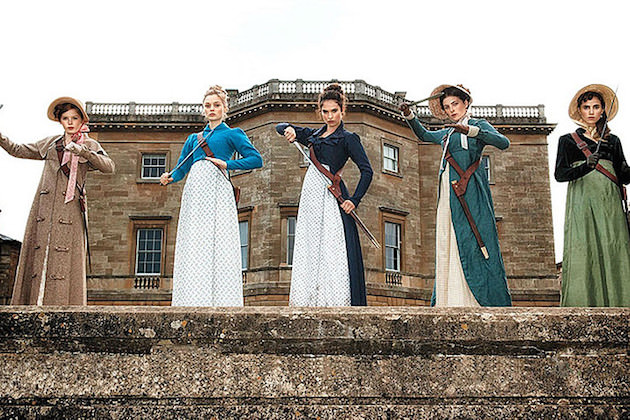 Comic-Con 2015: The Stars of Pride and Prejudice and Zombies

Matt Smith and Jack Huston have a bit of a bro-mance going on. The eleventh Dr. Who and the Boardwalk Empire star play very different characters in the upcoming Pride and Prejudice and Zombies but they both fail to gain the heart of Elizabeth Bennett (played by Cinderella star Lily James) and in an interview they joked that the main reason they made the film was the chance to work together.

Smith admitted that he is “constantly nervous. I’ve got the energy of a giraffe.” He plays the clergyman Mr. Collins and Huston (grandson of director John Huston) plays the dashing but duplicitous soldier Mr. Wickham. Huston said he could not resist the project from the title alone. “You think that can’t possibly work, and then you’re surprised at how well it does work without sacrificing anything from the original novel, keeping very true to it.” “I sat down with [director] Burr [Steers] and I liked his older movies and the cast that was involved,” Smith added. "I was excited to work with them. And I said, ‘Yeah, that sounds like a movie I would like to watch.’”

In the original Jane Austen story, Mr. Collins is humorously pompous and obsequious, with one of the most clueless offers of marriage in literary history.  So I asked Smith what kind of a zombie killer he turns out to be. “Not very well, I’m afraid — Cowardly Collins. He’s terrible at proposing, terrible at killing zombies, terrible at pretty much everything.” “You need him so much in this movie,” Huston added. “We were all not playing the comedy of the zombies in the rest of the story. You need that element in which you can be funny, and Collins is the one who lets you realize that there is a funny element to it.”  Smith speculated about what weapon Dr. Who would use to fight zombies. “Probably some sort of stunner with an electrical pulse.” I asked Huston if Wickham would use his famous charm to ward off zombies, and he said he would.  “It’s for everybody!  The zombies are easier to sweet talk, aren’t they?” he said with a very Wickham-seque charming smile.

Both actors agreed that the scariest zombies are those from 28 Days Later.  Huston explained what makes them so terrifying. “Manic, mad, red eyes, frothing at the mouth, and that pace. It would be horrible to be eaten by them. You sort of feel like you could fight the other ones, off.” On the other hand, he said he might get impatient with the slower ones just taking too long to eat him.

Smith and Houston agreed that their ideal way to survive a zombie apocalypse would be to get on Roman Abramovich’s luxury yacht together and sail out into the middle of the ocean.  “There’s be a select crew,” Houston said.  “I think we should try and make it happen anyway, Jack,” said Smith.  “It sound like a good time.  We’re actually hoping for zombies.” At least, that seemed ideal until I notified them that the sequel to the book is Sense and Sensibility and Sea Monsters.