Ant-Man VFX Supervisor on the Power of Shrinkage

Jake Morrison, Ant-Man’s VFX Supervisor, talks to The Credits about the challenges of bringing a tiny superhero to life and convincing the audience to come along for the ride, especially when he's riding a flying ant.

You must be happy for people to be able to finally see Ant-Man? I imagine it’s a long process for you?

Yes, I'm looking forward to Friday being the big day. For us, in visual effects, it’s been almost two years.

When you’re working on a film like Ant-Man how do you strike a balance between creating really cool effects and keeping things realistic?

The key part is there's a mandate from the very beginning for it to be photorealistic. That’s something they insisted on from day one, that it be a completely photorealistic experience for the audience because if anybody sees a hint a fake it actually pops them out of the story. That’s the key thing that you never want to do, you want to make sure that people still believe that the environments are real.

Absolutely, which I think is a big criticism of films that use a lot of CGI, it’s that if you look too closely, you think, hang on, that looks like a cartoon.

Exactly. I don’t mean this in a bad way but it’s the video game factor… the tricky bit is you can have things looking realistic but when the camera starts moving you sort of see that the camera moves in a way that it really shouldn’t do if you’re in a movie. So, that was the first thing that they asked us to work out. How to make these little mini-environments completely photorealistic but to be able to put the camera anywhere? The second thing is to make sure that you knew that that was the bloke in a suit at every moment and you never questioned that Ant-Man or Yellowjacket were ever actually CGI creations.

One thing I noticed is that when he first shrunk down everything seemed hyper-real up close and you can see the textures of things when he’s tiny. How did you achieve that?

Not to be too literal, but we figured that the best way to achieve photorealism was with a photo. We convinced production to establish what we called the macro unit. And effectively the macro unit had by the end of it, I think it shot 40 days of principal photography. It had it’s own art director, director of photography, and what they basically did was made chunks of real sets. They re-made them, but better.

If a scene took place in the bathtub, we’d actually get a real bathtub. I think we went through about six of them and we cut them into different configurations, and we’d shoot them with a motion picture camera. So we’d light them and shoot them so they looked real. So we always had actual perfect reference to go to so we could say this is what it would look like if you had a movie camera there. Then we went in with a load of stills cameras. We called it harvesting. We went in there and shot hundreds of of thousands of stills and did a 3D scan of the environments as well. 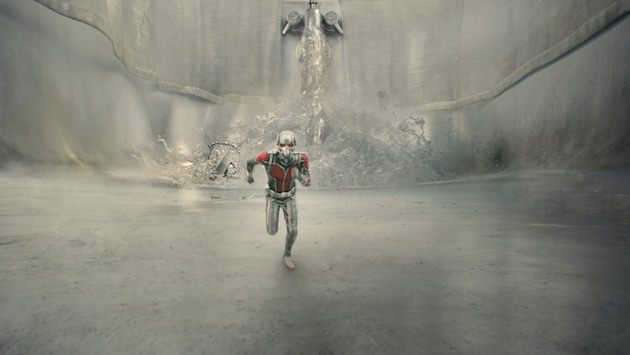 So you can match them up later on?

Exactly. So you can say take these stills and take the little scan and glue them together. At the end of the day you can do anything you like with the camera but it should look like that motion picture reference.

That’s interesting because it was something that was very noticeable in the film and it enhances the experience so much.

Well, that’s good to hear because it’s already a huge suspension of disbelief to believe the bloke can- I mean, he rides a flying ant, so that’s odd. You’re already bending the rules with the audience, so the minute you show them something on the screen that looks fake, I feel that there would be a natural human reaction to go ‘Ah, see I knew it was fake’.

The key thing is the bloke in the suit aspect of it, has to be a real person. So, rather than go into animation- and I have great respect for animators, as we used them for every single ant in the movie. For people, I think the best result you get is if you start with a real person. So we had Paul Rudd, who’s really good with physical comedy. We had him in a motion capture suit and had him perform all the key action moments in the movie.

And we had his stunt double Colin, who is an amazing acrobat, as well as being a stunt double. We had huge amounts of real world performance that we could harvest from. So when you do see all those stills put together in a real environment and you see the character stand up and look around completely shocked about where they are, that’s really Paul Rudd doing it. We might have taken that information and run it through the computer to be able to get that camera, but it really is him performing.

Tell me about the tricks that you have to use onscreen to make sure Ant-Man appeared small when he shrunk down?

Well, there’re quite a few of them actually. The first thing you never do is you never shoot him from the waist up and you know it’s kind of almost the Michael Bay shot at this stage, where you do a low-angle revolving camera around somebody, and typically it’s a Dwayne Johnson-shot, and they look like a huge hero. The minute you do that with Ant-Man, he looks like a normal sized person in front of a blue screen. So, we almost always shoot down on him slightly, and it’s something that when I was working early with Bill Pope, who is our first director of photography on the picture, he had a good idea, which was when he shoots kids in movies he will typically lift the camera up and shoot down on them slightly and so it diminishes them in frame and they look a little bit more vulnerable. So we thought, why don’t we apply that on a much larger scale with Ant-Man. Almost always we lift the camera and shoot down on him, so we see him from head to toe. So seeing him from head-to-toe and actually seeing what he’s standing on is really helpful. 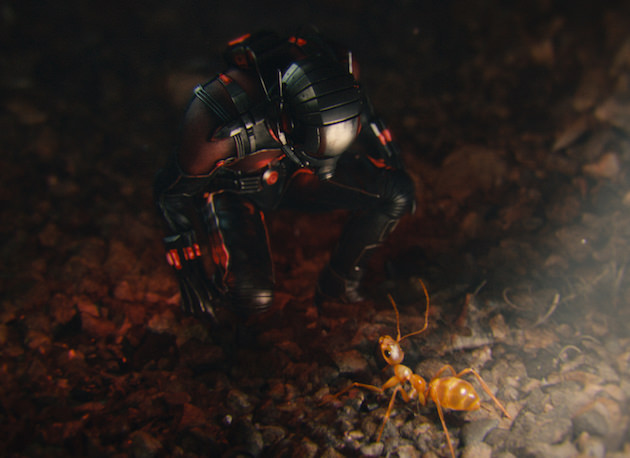 This might be a stupid question but is it always CGI these days or, are there any old school special effects that you use when you’re working on a film like this?

It’s interesting the first thing that you don’t do when you’re doing a shrinking movie, we discovered, is you don’t build over-sized props anymore. I think it’s the way you build the props, you’re using human hands to build them and you can tell that they were built over-size. So we decided that we wouldn’t do any of that stuff.

[We did build] the architectural model which Ant Man runs through. When you shot this thing with squibs at 1000 frames a second it gave all these different layers of complexity and loads of debris and all that stuff. So we actually shot one miniature in this movie but it’s 1:1 scale and it’s the architectural model. And we shot all that for real. There is some CGI in there because, again, the camera is doing crazy things, but we used mostly the original footage. We like to shoot everything as real as possible because the minute an audience smells a fake- that’s it, we’re done. So you start with real every time. So, if you’ve got to flip a car, the best thing to do is flip a car.

Most importantly, how did you make Michael Douglas look 30-years younger for that pivotal scene?

It’s pretty technical but it comes down to people. It’s technical and artistic. We actually had a great man called Dax Griffin (The Bold and the Beautiful, The Change Up), who has a striking resemblance of Michael when he was about 40 and Dax was an amazingly adept physical study. So, what he did was watch a load of Michael Douglas films from that era and studied his walk, his physical moves, all that stuff. On the day we had Michael with a few dots on his face so we could more easily track his facial expressions later. Once Peyton [Reed] liked a particular take and said that’s the one I’m going to use of Douglas, we’d then have Dax look at play back on the monitor and then would actually perform the entire scene again from that exact camera angle- he’s amazingly good at it. What that got us was a perfect reference for what a 40-year-old person looks like in that lighting. So that’s what we got from that part of it.

But how did you get his exact facial features? I know they just did this for Arnold Schwarzenegger in Terminator: Genisys as well…

Then we took Michael and did a three-dimensional laser scan of his face, so we had his head in a box, as it were. And we did the same thing with Dax. And then there was a three-dimensional track of Michael Douglas’s head. They then had Dax sit in a chai, and we projected the light that we’d captured from the set during Michael's performance. I know it sounds crazy, but when we were on set in Atlanta we did a light probe where we could work out exactly where the movie lights were. And then we recreated that with Dax in this chair and had him re-perform the action exactly, and then you can effectively take the three-dimensional version of the young Douglas and superimpose it back onto the normal Michael Douglas, and then it becomes a matter of artistry. Once you’ve assembled all the technical stuff that you need to do, it’s all art.

Well, the result is incredible.

I know that Michael Douglas was really happy, when he saw the first play back of that. I was talking to Peyton about it. He was doing some re-recording of dialogue and he saw some of the early renders of that and I think the reaction was pretty good.

It would be very freaky for him I imagine?

Well, that’s the thing, you figure that no one is going to be the bigger critic than themself, right?