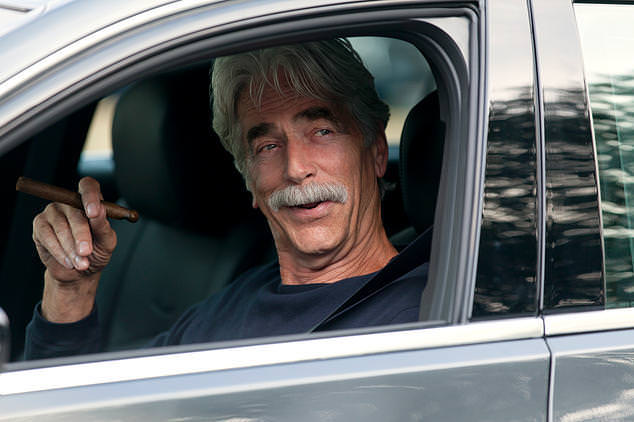 A Q&A With Sam Elliott, Whose Career, Like his Mustache, is as Strong as Ever

Veteran actor Sam Elliott, known for his impressive mustache and that velvet-in-gravel voice, at age 70 is experiencing a late-career resurgence.

Not only did he star in the final season of FX’s critically acclaimed series Justified (playing the clean-shaven Markham), Elliott was feted at this year’s Sundance Film Festival for three films: Digging for Fire, directed by Joe Swanberg; I’ll See You in My Dreams, directed by Brett Haley; and Grandma, from writer/director Paul Weitz . The latter two have earned Elliott, whose big-screen career began with Butch Cassidy and the Sundance Kid (1969) and has carried on through cult classics (Roadhouse, anyone?), blockbusters, more cult classics (The Big Lebowski, although this film is now a little more than a cult film), to some of the best reviews of his life today.

“The reception at Sundance was astounding,” says Elliott. Both Grandma and I’ll See You in My Dreams “had capacity crowds and both got standing ovations. The locals all say that never happens at Sundance. It was a heady experience.”

His sudden high profile wasn’t planned, Elliott says, but he does choose his films carefully. “It’s always been what’s on the page for me,” he says. “It’s the work. If it turns out to be a great film, that’s the bonus. But it’s the process itself and the experience of working with some really nice people that’s such a great gift. We’re all lucky to be able to do it."

“I’ve loved being a character actor and playing those roles for last few years and selling beer and trucks with my voice. But for these movies to come along now — it’s mind-boggling.”

Grandma which will be released in August from Sony Pictures Classics, has sparked awards buzz for star Lily Tomlin as a feisty feminist poet which travels around LA over the course of a day as she tries to help her granddaughter obtain $600 to pay for an abortion. The film hits its stride with a pivotal scene between Tomlin and Elliott, as an important figure from her past. “We have history between us … It’s an 11-page sequence I’m in and it’s wonderful piece,” says Elliott. “This was something that I could not turn down and it’s from a filmmaker that I love, Paul Weitz. I worked with his brother Chris [on The Golden Compass in 2007] one time. That’s how [Grandma] came my way.”

Tomlin is astounding in her role, and the intense scene she shares with Elliott has resonated with reviewers. Scott Foundas writes in Variety, “The 70-year-old Elliott, who has played countless cowboys, lawmen and tough guys, has never opened himself up like this in a movie before, or seemed so fragile and vulnerable beneath the flinty macho facade. In about 10 minutes of screen time, he creates a fuller, richer character than most actors do given two hours, and Tomlin is every bit as good as the woman who understands his pain but is helpless to relieve it.”

Also drawing raves at Sundance and now out in theaters is I’ll See You in My Dreams, which manages the unusual feat of tenderly depicting a romantic, sexual relationship between a 70-year-old widow (Blythe Danner) and a man of the same age.

Elliott says he was drawn to the insightful script and the chance to work opposite Blythe Danner playing a mature couple without geriatric comedy pandering. “Older couples don’t have to be the way they are in the Cialis commercials,” he says. “I credit Brett and Blythe and to a certain degree myself. I was sensitive to how [Danner] was feeling about the bed stuff and the kisses. The first day we worked together was the first kiss we had in the car. I remember she was nervous and said to me, ‘I’ve never kissed a man with a mustache before’ and I thought, ‘Wow, how is that possible?’

“She’s just a lovely lady. I’ve loved her from afar, like all of us have. It’s just a gift this thing came along and I was determined to do whatever I could in service to the script and to my leading lady.”

With a storied, nearly five-decade long career, Elliott says he’s always seeking to stretch himself but mostly he just enjoys working at something he loves. “I’ve been so fortunate for 47 years to have a work life and a love life. I have a lovely wife and a child at home. I have the best of both worlds,” says Elliott who’s been married to actress Katharine Ross since they starred in the horror film The Legacy in 1978 (they met on the set of Butch Cassidy and the Sundance Kid but didn’t date until their second film together).

“I have no interest in retirement,” he says. “This is what I do. I’ve worked as a manual laborer for a living and I certainly don’t want to go back to that. I could just kick back and do voice-overs and live on that or live on bank accounts but I’d rather just keep making my mark in some respect. It’s entertainment; and that’s what I do. I’ve wanted to do this since I was a little kid. I’m just so fortunate to be able to do it.”