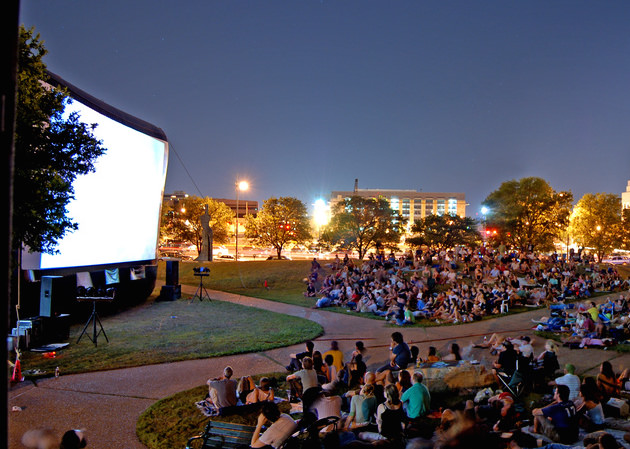 Where to Watch Great Films Outdoors Around the Country

It is going to be a beautiful late spring/summer week. We can’t think of a more amazing way to enjoy the intersection of art and astronomy than by watching a film under the stars. Many cities and towns have wonderful outdoor movie programs (many of which are free). For example, if you were in NYC last Friday, you could have taken the family to see Space Jam at Frederick B Judge Playground in Queens. This Friday in New York, Films on the Green 2015 presents Franco-Lebanese movie Caramel in Washington Square Park. For our friends in L.A. may we suggest Jurassic Park on Saturday night at Victory Park in Pasadena (it's a great way to prepare for Jurassic World)? Families in DC will enjoy a Viewer’s Choice at National Harbor on Sunday evening.

Here's a quick tour of some great venues around the country to take in a film outdoors.

Chicago: Chicago Park District Movies in the Park. "The 15th annual Movies in the Parks series kicks off June 4, 2015 and features more than 240 outdoor screenings of current and classic movies in parks across the city."

DC, Maryland and Virginia: DC Outdoor Films. Check out their calendar of films here, which includes recent critical darlings like Whiplash and classic family favorites like Back to the Future.

Indianapolis: Movies on the Lawn, Garfield Park Arts Center. Jurassic Park, Honey I Shrunk the Kids and Guardians of the Galaxy are a few of the films coming up this summer.

Los Angeles: LAist – Let the LAist give you the scoop on all the films screening outdoors this summer. Los Angelenos (and visitors) have the opportunity to head to the Cinespia's Hollywood Forever Cemetery and take in a film among the tombstones.

Miami: It's tough to beat $5 summer dive-in movies at Grapeland Water Park. "Imagine sitting in a pool and staying refreshed while watching a funny animated movie. That’s the experience during Dive-In Movies…"

New York City: NYC Parks Free Summer Movies. Whether you're in Queens, Brooklyn or Manhattan, the city that never sleeps has a slew of outdoor screening options.

Portland, OR: Movies in the Park 2015. Portland's outdoor summer movie season kicks off in July, and one of our all time favorites, The Princess Bride, plays on July 9.

St. Louis: St. Louis Art Museum Outdoor Film Series. Look at this incredible lineup; Back to the Future, Jaws, Clueless and The Sound of Music.