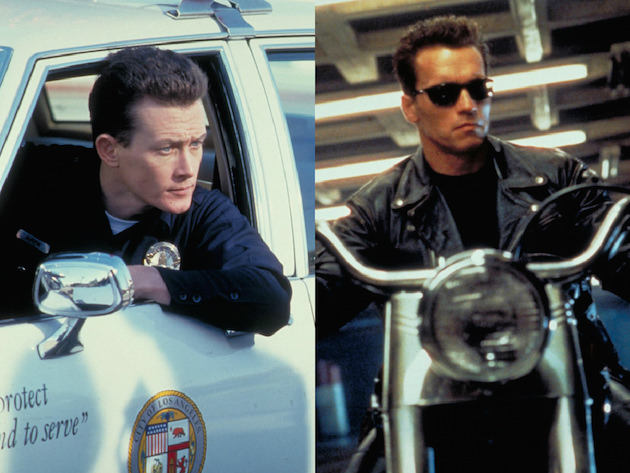 The Terminators—you can’t live with them, you can’t live without them. That’s the way the world James Cameron created began to work in the second installment in the franchise, Terminator 2: Judgment Day, where Arnold Schwarzenegger’s T-800 was not the villain (as he was in the 1984 original), but the savior, coming to protect Sarah (Linda Hamilton) and John Connor (Edward Furlong) from the new, liquid metal T-1000 (Robert Patrick).

Since T2, while the humans have done their fair share of fighting, it’s been the battles between the Terminators that have been the most devastating. The T-800 (upgraded to a T-850 in Terminator 3: Rise of the Machines) has often been the Good Terminator, embodied by Arnold Schwarzenegger until Terminator Salvation. Now he’s back in Terminator: Genisys, and once again his outmoded, outgunned T-850 will have to go up against some vastly superior machines.

While on paper, there is simply now way a T-800 or T-850 could defeat a T-1000, a TX (from Terminator 3: Rise of the Machines) or whatever the hell John Connor becomes in Terminator: Genisys, the crafty robotic assassin/protector has survived largely due to cleverness and an uncanny sense of timing. Here's our Fight Card from the first major Terminator v. Terminator battle from T2, when Arnold's severely outmatched T-800 had to go fist-to-liquid-metal-fist with Robert Patrick's nasty T-1000.

The T-800 (Arnold Schwarzenegger) is cybernetic organism, with living tissue grafted onto a hyper-alloy endoskeleton. It’s “brain,” a neural net processor, can upload vast troves of data instantaneously, allowing to it become an expert sniper, soldier, medic, or whatever the situation might call for. 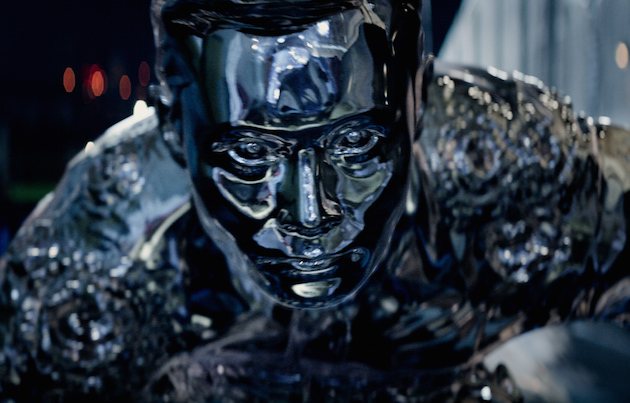 The T-100 (Robert Patrick) is made entirely from a liquid metal called mimetic poly-alloy, which allows it to deform and take any shape it touches that’s around the same size. It’s liquid metal construction allows the T-1000 to regenerate, even after suffering massive damage.

Round 1: The Northridge Fashion Mall

At a mall in Los Angeles, the T-800 and the T-1000 trade shots. The T-800 opens up his box of roses to reveal a shotgun (a hat tip to the film’s soundtrack, by Guns & Roses). Shooting the T-1000 with the shotgun has limited effect, however. The T-1000 responds by shooting the T-800 with a Browning Hi-Power pistol in the back. The T-800 is unfazed! In hand-to-hand combat between the two, the T-1000 is stronger and faster, pummeling the T-800 repeatedly. Although this was before the age of text messaging and the subsequent acronym craze, the T-800 definitely makes a WTF? face when it finds itself outmuscled.

Things begin poorly for the T-800. The T-1000 shoots the T-800 with a MP5 submachine gun. The T-800 rallies with several shotgun blasts (one at close range to the head, creating that famous split skull shot) that slow the T-1000 enough so the T-800, Sarah and John Connor can get into the elevator. The T-1000 responds by turning it’s hands into blades, attempting to pry the elevator door open and, later, slice and dice it’s way into their escaping car. Another close range shotgun blast by our beloved T-800 blows the T-1000 off the car.

The next round moves to the highway, and goes from hand-to-hand combat to vehicle-to-vehcile. The T-800 slams on the brakes of his SWAT fan to bring down the T-1000, who has commandeered a helicopter. The SWAT fan crashes, hideously. The T-800 is fine, save for some superficial damage to its flesh. The T-800 and the Connors grab a truck which, luckily for them, has a huge tank of nitrogen. When they crash the truck into a steel mill and a huge stack of metal piping, the T-800 is injured, and walks with a limp in his left leg and has suffered some motor control issues. The spilled nitrogen freezes the T-1000 into a solid, seemingly immovable form. Sensing a great opportunity here, the T-800 blasts it, shattering it into a bunch of pieces. Although the T-1000’s frozen pieces are eventually melted and it reforms, it now has been sufficiently damaged, creating a glitch that causes it’s hands and feet to take on the properties of the various objects it comes into contact with, a hilarious visual gag in otherwise brutal battle.

Round 4: The Steel Mill

The T-800 goes for a totally inadvisable body shot, but the T-1000 simply captures the T-800’s fist inside it’s liquid metal chest. Next, the T-1000 shoves the T-800 into a massive gear mechanism, which traps its left arm into the grinding wheel. The gears ground to a halt, but effectively chew into its arm, trapping it there. The T-800 grabs a steel rod and split its own arm with it, tearing it off and freeing itself. Only once again, the T-1000 absolutely throttles the T-800, slamming it against a metal girder over and over again, and the resultant blunt force trauma to the T-800’s head causes it to fall to the floor, unable to get back up. The T-1000 then stabs the T-800 with a metal pole, twisting the pole until it impales the T-800’s primary power cell, effectively shutting it down.

Round 5: The Steel Mill, part II

The T-1000 is on the brink of victory, and here it must be noted that, as the T-800 is busy repairing itself, the T-1000 is temporarily waylaid by some shotgun blasts by Sarah Connor. At the very edge of a pool of molten steel, Sarah runs out of ammo and the T-1000 appears poised for victory. This is when the T-800, having recovered (but still massively damaged), shoots the T-1000 with an explosive round, disfiguring it and sending into the pool of steel, where it dies, dies, dies, a knockout victory for the T-800!

In the most dramatic exit in fight history, the T-800 slowly lowers itself into the molten pool, killing itself, but not before throwing the Connors a hearty thumbs up. 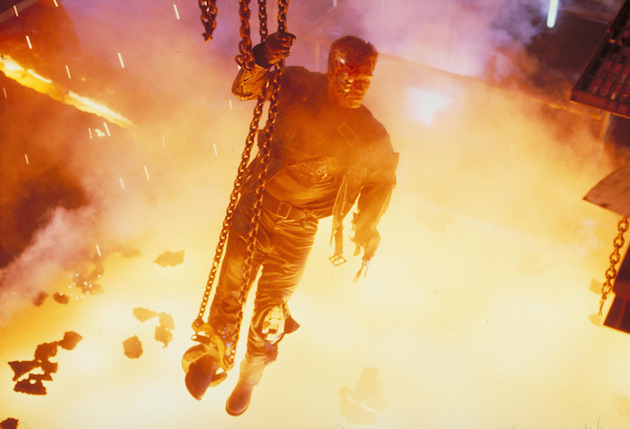