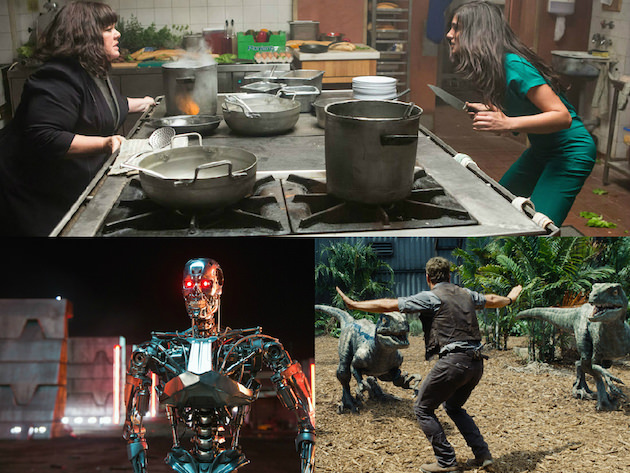 Summer is Here, so are the Hot, New Flicks

The official start of summer may be June 21st (summer solstice), but we've already had our engines revved and our worlds destroyed at the cinema recently. This past weekend we were treated to the release of two very disparate but entertaining films, Warner Bros. San Andreas, starring perhaps Dwayne Johnson, our reigning action king (it was only this past April Johnson co-starred in the critical and commercial darling, Universal Pictures' Furious 7) and Sony Pictures' Aloha, Cameron Crowe's love letter to Hawaii. Furious 7 and San Andreas have been part of our pre-summer adrenaline rush, joining Marvel's Avengers – Age of Ultron (read our interviews and stories about Ultron here) and Warner Bros.' Mad Max: Fury Road (curious how they made those incredible automobiles, click here). For a change of pace (and tone), there was Universal's Pitch Perfect 2 (get to know the music supervisors here), 20th Century Fox's Poltergeist, and Disney's Tomorrowland (here are some interesting facts about the creation of Brad Bird's passion project)– making this a summer to remember before it even begins.

This week, in the words of the Downton Abbey’s indomitable Dowager Countess, “What is a weekend?” The boys are back on Wednesday as the long awaited big-screen adaptation of Entourage heads to theaters: Based on the HBO series, the Warner Bros. release focuses on, of course, Vincent Chase (Adrian Grenier), together with his boys, Eric (Kevin Connolly), Turtle (Jerry Ferrara) and Johnny (Kevin Dillon), are, according to one billboard in Los Angeles, want us all to "dream large, live larger." Directed by longtime Entourage writer, director and executive producer Doug Ellin, and packed with a reported 1,298 cameos from Hollywood royalty (give or take a few hundred), Entourage the sees our favorite super-agent, Ari Gold (Jeremy Piven) now a studio head, so you can be sure the fellas are going to be living as large as possible. Some of their ambitions have changed, but the bond between them remains strong as they navigate the capricious and often cutthroat world of Hollywood.

The fun continues through the week when we get a chance to and laugh our pants off with 20th Century Fox's Spy, starring Melissa McCarthy, Jude Law, Jason Statham, Rose Bryne, and Allison Janney. (Read our interview with Spy stunt coordinator J.J. Perry here.) Spy once again pairs the singular gifts of McCarthy with writer/director Paul Feig (the man behind Bridemaids, The Heat, and the upcoming, all-female The Ghostbusters, which will also star McCarthy.)

Summer's also a great season to have the pants (or shorts) scared off you with a seriously unsettling horror flick—Sony Pictures' Insidious: Chapter 3 should do the trick, also bowing this Friday, June 5.

Music fans (especially Beach Boys fans) will want to head to Love & Mercy, and after reading our interview with the film’s composer, the legendary Atticus Ross, you’ll know why. Bill Pohlad's biopic of the Beach Boys mastermind Brian Wilson focuses on two distinct period in the songwriter's life. The movie intercuts the time when Wilson (played in these sections of the film by Paul Dano) quit performing live in order to focus on the creation of the album Pet Sounds, the single "Good Vibrations", and the eventually discarded album "Smile." During this time, Wilson's mental health issues grow worse. The other sections of the film features John Cusack as Wilson, and features him attempting to escape the influence of a manipulative doctor (Paul Giamatti) who has become a totalitarian guru to him. Helping him in this endeavor is a care saleswoman Melinda (Elizabeth Banks). Love & Mercy screened at the 2014 Toronto International Film Festival.

One of the most hotly anticipated films of summer lands a week from this Friday—so be sure to plan your trip to the ultimate amusement park, Universal's Jurassic World, on June 12th. Be warned—the park has some major design flaws.

On June 19, Pixar's exquisitely reviewed Inside Out bows. The film, about a little girl's emotions (each represented by a different animated character and voiced by an exceptional actor) going out of whack when she moves to a new home, has gotten raves.

On July 1, Paramount brings back the ultimate Terminator, has Arnold Schwarzenegger returns to the role that made him famous in Terminator Genisys. Schwarzenegger stars alongside Game of Thrones Emilia Clarke as Sarah Connor and Jason Clarke as John Connor, as the three of them reunite to try and stop the final Judgement Day.

And this is but a taste, folks. There's plenty more summer fun to be had at the theater. Just make sure you get outside a little bit, too.