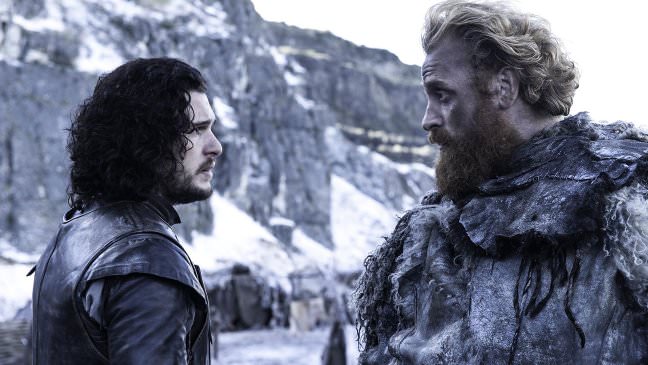 Last night’s episode “Hardhome” might not have been the season's penultimate episode, but it played like one. Like those penultimate mindblowers Blackwater, The Red Wedding and The Battle of Castle Black before it, this third-to-last episode in season five had one extended, terrifically shot set piece that was as satisfying as it was intense. Yet before the thrilling last fifteen minutes of "Hardhome," there was plenty to enjoy.

The Queen Bey & Jay-Z of Westeros

Finally. The long awaited pairing of Tyrion Lannister (Peter Dinklage) and Daenerys Targaryen (Emilia Clarke) finally happened in earnest (we got the briefest taste last week, when Tyrion revealed himself to Dany as Ser Jorah's "gift.") Their banter, first while Tyrion stood beneath her as she sat perched on her throne, and then, more intimately, as they drank wine together at a table, was as witty and fierce as one could have hoped for.

The experienced, insightful Tyrion is initially put to the test by the would-be ruler of Westeros, and he passes as we were all pretty sure he would. Tyrion first showed his compassionate side—when asked to advise Dany on how she might deal with Ser Jorah, Tyrion suggests she spare her former advisor's life. Tyrion's political skill is made readily apparent when he also suggests that Dany banish Jorah, thus removing a potential competitor for Dany’s ear. And in Dany, we saw the qualities that might make her a good leader, such as knowing good advice when she gets it (she banishes Jorah), as well as the fire that has propelled her this far in the first place If Cersei had half of Dany’s political intuition, she might not be licking water off the floor of her cell right now, awaiting her trial for fornication, treason, incest and the murder of King Robert.

Tyrion and Dany as a power couple makes sense beyond the desires of GOT fans who adore both characters. They’re both orphans, they both come from storied, terrible families, they both had extremely difficult fathers and childhoods, and they both should have probably been dead a dozen times over by now if it weren't for their protectors (in Tyrion's case, his brother Jamie, in Dany's case, and unbeknownst to her until this moment, the late King Robert's master of whisperers, Varys). It is almost immediately apparent (at least by the time Dany breaks out the wine) that they recognize these similarities in one another, and they might also sense, perhaps more importantly, that they have similar viewpoints on the world. Tyrion seems himself as a realist. Show co-creator and episode co-writer David Benioff remarks that, despite his cynicism and lack of sentimentality, Tyrion is one of the few players in this game that “believes it’s possible to make things a little bit better for people.” Which is precisely what Dany wants to do, and she believes the only way to achieve that is by creating a new world order. We were finally treated to the full context of her great “I’m going to break the wheel” line they've been teasing since this season began.

Reek Finally Does Something Useful

While Arya continued her tutelage under Jaqen H’ghar, the Stark girl with the biggest moment of the show was definitely Sansa. When she confronts Theon (who once again goes third person on her, reminding her that Theon's dead and she's talking to Reek—finally she seems to agree with him on this point), about how he could kill her brothers after having known them since they were babies, she finds out he didn't—he had two farm boys killed and staged it to look like it was Bran and Rickon. This is a huge, huge moment for Sansa, who is given fresh hope and a real reason to fight even harder, no matter what it takes, to reunite with her family. Here's once again hoping Ramsay dies by her hand.

The Battle Beyond the Wall

The last half of the episode made all the palace intrigue seem suddenly absurd; the real threat in Westeros, the one hinted at in the very first episode of the series, are the White Walkers. They could care less about the spokes on Dany's hated wheel, and are utterly unmoved by the long, sordid history between the Lannisters, Targaryen’s, Tyrells, Starks, Baratheon's and any other highborn family—they simply want to kill the living and turn them into their undead army. What they'd do with Westeros once they have control over it I have no idea; they don't seem like the type to summer in Dorne.

In a spectacular battle sequence at Hardhome, the episode went from intriguing to riveting and relentless. The direction by Miguel Sapochnik (he directed this season's "The Gift," and also directed an episode of the upcoming second season of True Detective) plunged us into the free folk's encampment (thankfully located on a body of water) that resulted in a thrilling 15-minute long massacre. Jon Snow, the wilding Tormund, a few Crows and a whole bunch of wildings (including the giant Wun Weg Wun Dar Wun) are attacked by an army of the undead.

The White Walkers and their wight army make the Walking Dead look like labradoodles. The White Walkers are like polar zombies, they're fast and are good with weapons, and even have ranks—the four horsemen that stand above the melee on the ridge line watching the carnage are clearly their superiors, and include the hinted at Night's King. Before the White Walkers and wights arrived, Jon Snow was trying to explain to the recalcitrant wildings that the only way any of them are going to survive is to band together with the Crows. He even drops some secret knowledge on them; the only way to kill White Walkers is with Dragonglass. Some wildings are convinced, thanks to Tormund’s blessing, that Jon Snow isn't tricking them and the grave threat of the White Walkers really is worth looking past centuries mutual slaughter between the free folk and the Crows. Those that said they’d never fight alongside a Crow soon had no choice; winter had finally arrived, just as Jon Snow has been promising for what feels like forever. 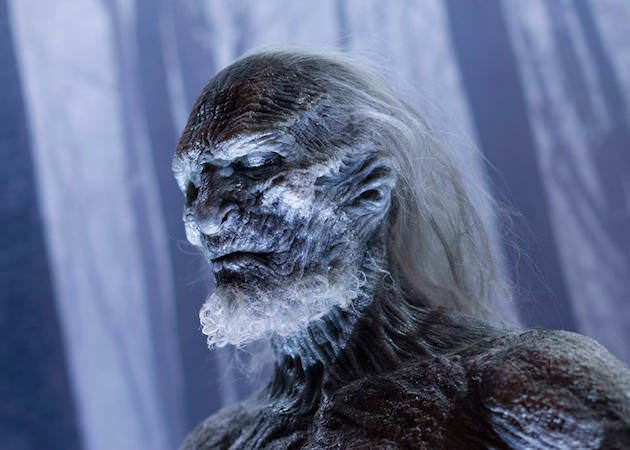 Jon Snow faces off against a White Walker, the very first White Walker introduced waaaay back in the series premiere, and it's pretty fantastic. It's man versus polar zombie-warrior, and using Longclaw, which a younger co-worker told me was "on fleek" (?), not only does Jon's stop the Walker’s ice blade from obliterating his own sword (White Walker weapons typically shatter steel), but Jon also kills him with Longclaw, turning the Willie Nelson of White Walkers into a downpour of ice, all with the Night’s King watching from above.

According to Benioff and Weiss, this moment is intriguing to the Night’s King, as this wasn’t supposed to be a battle but a slaughter, and the fact that there’s meaningful resistance taking place, and a human capable of not only brandishing a weapon that can withstand a White Walker’s sword but also kill him, means they may actually have a fight on their hands.

But then the Walkers simply overrun the living, in a wild, freaky waterfall of the undead who come pouring over a cliff, rise up from their heap, and rush forward into battle. "This felt like such a strong visual way to get across how implacable in unstoppable and single minded these things are—they could care less about their own safety, they didn’t feel any paint, all that mattered to them was killing you,” Weiss says. Jon, Tormund and a few others are the last to escape by boat (why can't the White Walkers or wights swim? No clue.) Jon watches helplessly as the Night’s King faces him from the dock, raising his hands to signal the “viral expansion” of his army—all the wilding’s he’s just slaughtered are now a part of his deathless cause. Jon is left with what Benioff describes as “the hopeless feeling of, ‘How they hell are we going to beat that?’”

Seriously, How Are the Hell are They Going to Beat The White Walkers?

We know the particulars of how you can kill one White Walker or wight, but a whole army of them seems daunting at best, hopeless at worst. A single White Walker can be dispatched by dragonglass, as Sam proved in season four. Dragonglass is found on the island of Dragonstone and the port city of Asshai. So loading up on that seems wise. Valyrian steel also works, as we were informed when Jon Snow finally picked up his fallen sword Longclaw and killed Willie Nelson White Walker. So, where does one find Valyrian steel?

Fire works on wights—the humans who have been killed by White Walkers and serve as their undead army. Wights are above average zombies (they can still wield weapons and are as fast as humans), but you can still slow them down by, say, cutting off their legs.

Finally, what might really come in handy in a full blown war with an army of the undead? These dudes.