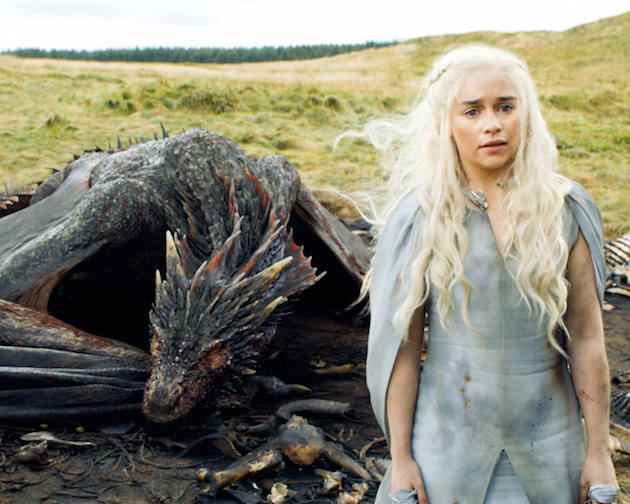 The following speculation on what really happened in the season five finale contains sundry spoilers, and was written by someone who has not read the books.

In order to prepare for Game of Thrones season finale, I re-watched “Dance of Dragons” in an effort to prepare for what we all knew was going to be a bloody finale. I stupidly hoped that by purifying myself with the pain of Princess Shireen of House Baretheon’s death, it would make whatever righteous victory came in the finale feel all the sweeter. I imagined Jon Snow doing something awesomely heroic, or Sansa getting revenge on Ramsay, or Daenerys coming back to Meereen with Drogon, picking up Tyrion, and heading off to King’s Landing to roast the Sparrows and claim the Iron Throne.

Stupid, I know. It was as if I’d forgotten the cruel math of this show: whatever you hope happens equals the opposite of what will happen.

Thoughts, questions, and ruminations on this wicked, weird finale. Let us know what you think.

That opening shot. A trio of icicles melting in the foreground, Melisandre, out of focus, in the background. So for a brief moment it seems that sacrificing Shireen and her “king’s blood” has paid off, and the Lord of Light is melting the snow so that Stannis and his army can advance on Winterfell. Yet in short order we find out that Shireen’s death was as appalling to many of Stannis’s soldiers as it was to us viewers. Roughly half of them abandoned Stannis and the Red Queen during the night, taking all of the horses. Now the siege on Winterfell is a suicide mission. And what does Melisandre do? She takes off. This last point just may hold a major key for everyone’s favorite bastard (or so we hope)…

The sort of, kind of, just-a-teeny-tiny-bit return of Theon Greyjoy. I’m still not quite clear on exactly what Myranda was threatening to do to Sansa, as her tortured logic didn't make much sense to me. She says that Ramsay needs Sansa to retain legitimacy in the north, as well as sire him a few sons, but then she says he doesn't need all of her, and that she's going to now shoot her with an arrow? Huh?  We’ll never know exactly what the hell Myranda was talking about, as Reek (!!!) finally had enough of all outrageous brutality of Ramsay and his murderous lover and shoved good old Myranda off the side of the tower. Now it’s this next part I also don’t quite get—Reek takes Sansa’s hand and they both…jump off the edge of the Winterfell wall? And the way they jumped wasn’t great—feet first, sure to break their legs on impact, right? I get it that they’re trying to escape, but I have to believe there was a better way. Also, Sansa is sort of reenacting Bran’s fall from the series premiere, when Jamie Lannister pushed him out of a window after he spotted Jamie and Cersei in the midst of a tryst.

Arya. Oh my god. In the pantheon of grisly murders, Arya’s dispatching of the lecherous, awful Meryn Trant was up there, and this was one of those rare GOT murders that, semi-shamefully, felt sort of good to watch (although it was extremely gory). Arya wears another girl's face into the brothel, is selected by Meryn as one of the three girls he would like to brutalize, then she reveals herself and swiftly stabs Meryn in each eye. I actually found her stuffing his mouth the ultimate show of her burgeoning barbarity. She’s not just a killer, she is actively increasing his pain, terror and humiliation. And then the way she makes him beg, whimper, and fall apart before telling him he’s nothing, he’s no one, and slitting his throat was one of the longest preambles to a murder on this show we’ve seen. The last time someone talked so much before offing someone it didn’t go so well. And what does Arya get for her bloodlust? She goes blind (but for good?), which H’ghar explains to her is the penalty for wearing a face when she was not ready.

The best moment in Jamie Lannister’s life in ages is ruined. You just knew Ellaria Sand wasn’t going to be so easily cowed by the Prince of Dorne. And you probably should have known that the long, very Dornish kiss she placed on Myrcella Lannister's lips before she left with her bethrothed, Bron and “uncle” Jamie wasn’t coming from her heart. So that’s why we were treated to that seemingly random scene in the jail when Bron finds out he’s been poisoned by Tyene Sand. His nose starts bleeding, she makes him call her the most beautiful woman in the world, and then she gives him the antidote. The whole scene felt sort of pointless, but it looks as if it was a set-up for this moment. On the boat, Myrcella tells “uncle” Jamie she knows about him and her mother, and that she’s glad he’s her father. They hug. Jamie looks floored by the moment. He nuzzles her, and then this being GOT, she starts bleeding out of her nose and, one would think, dies. Yet this marks one of the finale’s many assumed deaths that we don’t actually see. Is it possible Bron smuggled some antidote onboard?

Varys! Save for Reek’s sudden heroism, Varys return is perhaps the only other moment in this entire finale that felt positive. Tyrion needs him, and Varys knows it, Tyrion knows it, and their begrudging respect and growing friendship is a little, tiny flicker of hope in an otherwise moonless prairie night of darkness that is the GOT viewing experience.

The Cersei shaming walk was brutal. The people I know who have read the books say this is classic George R. R. Martin—making you feel compassion for a character you had sworn to loathe for however long he or she lived. This insanely long, awful walk Cersei must take through King’s Landing while exhausted from starvation and dehydration, in the nude, while being taunted, spat on, covered in rotten food, her feet bloodied, and flashed by a few supremely agitated commoners, was really, really painful to watch. A guest essay by Larissa Tracy in The Wrap explains that this kind of public humiliation has historical roots in medieval history. As Tracy writes: “In the medieval period, adulterers were often subjected to exactly this punishment–a naked walk through crowded streets–not as torture but as a lasting consequence for their sinful behavior.” When Cersei finally makes it back to the Red Keep, after what felt like the worst Tough Mudder competition of all time, she’s shattered. But there is Qyburn, wrapping a blanket around her, telling her he’s got a treat for her: Gregor “The Mountain” Clegane has arisen, thanks to Qyburn's queasy scientific methods, and now appears to be a sort of decaying, gold-armored Frankenstein, sworn to hunt down and destroy Cersei's enemies.

Is Stannis Dead? It would seem the only answer can be, but of course. He was routed in his “siege” of Winterfell, in which he essentially condemned the men who stuck by him to death by trying to take a castle without horses, enough weapons, or enough men. And so Stannis is left wounded, slumped against a tree, when Brienne of Tarth and her seasons-long grudge showed up. She condemns Stannis to death, he accepts her verdict with his usual grim stoicism, and she swings her blade…but we never see it strike Stannis. Is it possible that Brienne, seeing the man she’s longed to kill pathetically wounded and surrounded by his own dead men, decided that she couldn’t do it? Mercy is a rare trait in GOT, but why cut from this scene and leave the certainty of Stannis’s death in question?

What will happen to Daenerys? The thing about dragons is they’re just impossible to train, apparently. Yes, Drogon saved Daenery’s life, but when she got on his back and they flew away, it seems her dragon-child took her a little too far, and tired himself out in the process. When Daenery’s takes a stroll, she’s surrounded by more horses than seemed entirely necessary by an offshoot of the Dothraki empire (I think), and is now likely their hostage. Will Ser Friend Zone and Daario get her back? And what about her other two dragons?

Is Jon Snow really dead? Turned on by his fellow Night’s Watchmen (Olly, we knew it was you), Jon Snow is stabbed a good half dozen times, in the gut, to end this season. For those of us who didn’t read the books, this was pretty shocking. It’s like we just refuse to remember all the deaths that have come before to the characters who are legitimate heroes, most of whom have been Starks. Jon Snow has been a legitimate good guy, and one of the few characters who really knows what the White Walkers are capable of. So his death feels like such a brutal blow, so brutal, in fact, that the collective response seemed to be mass denial—he’ll be saved by magic (remember, Melisandre conveniently showed up at Castle Black earlier in the episode, and she can wield the same magic that resurrected Dondarrion), or he’ll warg out into his direwolf, or something, anything to keep Jon Snow alive. Yet D.B. Weiss told Entertainment Weekly that “We would hope that after seeing the scene and the way it’s shot that the answer to that will be unambiguous in the minds of the people watching it.” And actor Kit Harrington told EW, “I’m not coming back next season.” Of course they have to say this.

So what do you think? Will Jon Snow survive? Is Stannis gone? Will Sansa and Reek survive that fall (they must) at escape (not so sure about that)? Will Arya ever see again? And will the Lannisters wage war on Dorne if Myrcella really is dead?

Featured image: Daenerys (Emilia Clarke) is far away from her people in Meereen, thanks to her dragon, Drogon. Courtesy HBO.