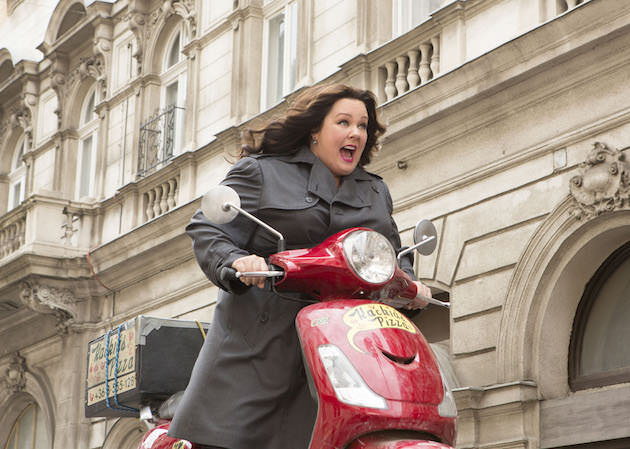 In writer-director Paul Feig’s Spy, Melissa McCarthy takes the reins as the latest bumbling protagonist in that tried and tested movie genre: the spy comedy. McCarthy plays CIA desk-jockey Susan Cooper who is unexpectedly called up to go undercover in the field. (See our interview with stunt coordinator J.J. Perry here about turning McCarthy into a proper, butt-kicking spy.)

Unlike the slick, womanizing James Bond, who navigates his way through each world-saving assignment improbably unruffled, or Tom Cruise’s tough-as-nails secret agent Ethan Hunt in the Mission Impossible franchise, the hero of the spy parody, comedy, or spoof, usually saves the day despite his, or, in this case, her, extreme unsuitability for the task. Along the way, there is usually no shortage of ridiculous disguises, evil geniuses, weird gadgets and diabolical plans. Here are a few notable examples, from the sixties to today, of our favorite undercover bumblers:

Dean Martin starred in this parody of Sean Connery’s James Bond, based on the Matt Helm series of spy novels. In the film, Martin as the booze-soaked, fun-loving secret agent Helm is coaxed out of retirement to thwart a nuclear war. Four of the tongue-in-cheek Helm films were made and served as inspiration for Mike Myer’s shagadelic Austin Powers, who first appeared in the nineties.

After acquiring the film rights to Ian Fleming’s first 007 novel Casino Royale prior to release of 1962’s Dr No, and trying unsuccessfully to get it made as part of the successful franchise, producer Charles Feldman felt the only way to compete with the Bond films was to send them up. This supremely silly film has an incredible cast, with David Niven as Bond, Orson Welles, Woody Allen, Peter Sellers, John Huston, William Holden Deborah Kerr, and the original Bond girl Ursula Andress. Burt Bacharach composed The Look of Love for the soundtrack, earning himself an Academy Award nomination.

Tweaking his incompetent cop persona from the Naked Gun movies ever so slightly, Leslie Nielsen stars opposite Nicollette Sheridan as bumbling secret agent Dick Steele. Naturally, he is charged with stopping the world from being destroyed by the evil General Rancor and his hidden missile.

Bill Murray plays Wallace Ritchie, in this comedy about an ordinary man in the wrong place at the wrong time. He is mistaken for a spy and embroiled in a plan to stop assassination attempts on international leaders. The best thing about this entry in the spy spoof canon is the title’s play on the 1934 Hitchcock film The Man Who Knew Too Much.

Sending up both the Blaxploitation films of the seventies and James Bond, this parody stars Eddie Griffin as Undercover Brother alongside Denise Richards as the brilliantly named White She Devil, and Dave Chappelle as Conspiracy Brother. When The Man tries to derail a black presidential candidate’s campaign, Undercover Brother joins secret agency B.R.O.T.H.E.R.H.O.O.D. and is tasked with foiling The Man’s plan.

After Britain’s top spies are murdered as part of a plan to steal the Crown Jewels, it’s left to Rowan Atkinson’s dim secret agent Johnny English to single-handedly save the day. English is hardly Atkinson’s most original comic creation but nonetheless there was a 2011 follow-up, Johnny English Reborn.

The Cohen brothers’ screwball comedy about a C.I.A agent’s memoirs ending up in the hands of two gym employees doesn’t follow the usual inept spy saving the world formula, but it did show us Brad Pitt’s comedy chops.

The film version of the successful sixties TV series and spy satire of the same name, Get Smart stars Steve Carell as the clumsy Maxwell Smart and Anne Hathaway as Agent 99. After his colleagues’ covers are blown, Max is promoted to the field as Agent 86, and partnered with the competent 99, to her chagrin.

In this Matthew Vaughn-directed comedy adventure based on the comic book The Secret Service, Colin Firth stars as the droll spy Harry Hart tasked with recruiting and training a promising street kid into his secret spy organization.