It’s not like composer Mac Quayle got into this line of work exclusively to score seriously demented moments, but the Grammy® nominated musician has done just that for one of TV’s most wild shows. Quayle has written music for more than 30 films and television shows, and has made a name for himself as a dance re-mixer and multi-instrumentalist, but you might have encountered his work most recently on FX’s hit series American Horror Story: Freak Show.

Ryan Murphy’s fever dream of an anthology series reached peak lunacy with Freak Show, and Quayle helped create some of the creepiest moments of the season. Starring Jessica Lange, Sarah Paulson, Kathy Bates and Angela Bassett, Freak Show has provided Quayle some of his most memorable scoring moments. And things for Quayle and fans of the American Horror series are only going to get better; he’s scoring the next season of American Horror Story: Hotel, starring, wait for it…Lady Gaga. 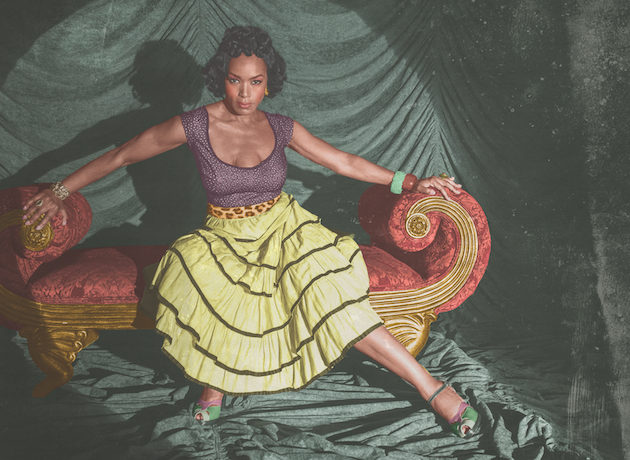 Quayle’s learned a lot from his time working with composer Cliff Martinez. He worked with Martinez on HBO’s Emmy-winning The Normal Heart, and perhaps one of the most beloved scores of the past few years, the Ryan Gosling led Drive. Qualye’s worked on Warner Bros.’ Contagion and A24’s Spring Breakers as well. Then in 2013, Quayle found himself chosen as one of only six composers to participate in Sundance’s Music and Sound Design Lab at Skywalker Ranch.

I spoke with Quayle about his work, including some of his favorite moments he scored for American Horror Story, and about the upcoming, hotly anticipated Scream Queens.

Let’s start with your background—how’d you get into composing for film and TV?

My first foray into music was at age 6 in the church choir, in Virginia. It started a journey that I could have never imagined, one that took me through high school band orchestra, rock bands, and finally I ended up in New York and worked in the music business as a keyboard player, producer and dance re-mixer. When the music industry started showing signs of trouble in the early 2000s, I decided it was time to leave, so I moved out to Los Angeles and started to think about film and television.

What exactly is a dance re-mixer?

A dance re-mixer, in the context of how I was doing it, would take a recorded song by an artist and turn it into a dance record and play it in nightclubs. It could be any kind of record, and generally I’d use just the vocal. I’m familiar with beats and grooves, and now I get to use that in my film and TV work. Just this idea of taking something that exists and making a completely new version of it that doesn’t really resemble the previous version, that’s been very useful to me in composing.

Walk me through a scene you’ve composed that you’re proud of.

American Horror Story has been a crazy show to work on, because there’s a lot of different types of music. There’s this secne in the first episode of American Horror Story: Freak show which was the first scene that I scored. It’s when Elsa meets the twins (Sarah Paulson, playing Bette and Dot Tattler). That’s where I wrote this first cue using these sort of 1950 sci-fi movie strings, and I’m so happy with how that one turned out. It was inspiring and that shines to me as a particular scene I'm proud of.

Another scene that was quite nice to work on was an episode called “Orphans,” in which someone has died in the opening, and they wanted something sad. So I ended up writing a piece that was very slow and kind of dreamy, but it just gave the picture this feeling of melancholy, of sadness, and then at a certain point the cellos come in. I had written that originally just using some samples, then I had an amazing cellist come and play it, and that point it really takes it home. It was really moving working on the scene.

There were certainly some moments that weren’t as traditional as I just described. This last season there were several different styles. One style, as I was describing before, was using what they were calling “50s sci-fi strings,” a nod to scores from those 1950s sci-fi films. It had these weird old sounding string samples, a Theremin, which is this really interesting instrument, it’s essentially two pieces of metal, almost like a old radio antenna, and when you move your hand close to it, depending upon how high or low you move your hand, the pitch of the sound goes up or down. So I mixed that with these old sounding strings on top of some synthesizer pulses and percussion and that ended up being a major sound for the season.

Another style was based in early 20th century classical music using this type of musical theory called 12 Tone, it sounds very unusual and discordant and I did a lot of that with piano and a little bit of cello. It’s very bizarre, to the ear it sounds so strange.

Later in the season, there’s a fill-in, this totally crazy psychopath named Dandy…

He finally meets his demise, and writing the music for that was really challenging, but a lot of fun. It was a big long scene, they captured him, put him in this Houdini tank and flooded it with water, and he drowned. I got to write this really long cue and got to bring in all these themes that had been used for him during the season. Finally when he passes we’re left with this broken music box playing. That was pretty special.

Tell me about working on Drive.

I can’t say enough great things about Cliff Martinez, who was the composer and who has been a bit of a mentor and friend to me. Working on that film with him was essentially a lot of fun. We had a feeling that it was going to do well and that it had something special, we hadn’t worked on something like it before. When we first got the cut of the movie, there were already some songs that had been placed in there. If you remember, there’s four or five songs in the film, and they sound like they’re from the 80s but they’re actually more modern. Those songs really inspired the score. So we were going to choose 80s synth sounds to compliment them. That mixed with the style Cliff has become known for, this ambient, soundscape texture. The score’s had quite a life outside of the film.

Contagion and Drive were happening at about the same time, they were released one week apart. There’s a little bit of a cross influence, some of the synth pulses showed up in Contagion as well. Steven Soderbergh is pretty much a genius, so that was another one we were happy to work on. The process on that film was different, we’d write something, send it in, then we’d get the next cut back and they’d put the music in a different place. Spring Breakers, was another crazy film, the director had this idea that he wanted Skrillex to be involved in the score, and of course he’s this great electronic dance music artist, so that was an influence as far as what we were doing, influencing the sounds and directions, and tracks were going back and forth between Cliff and Skrillex.

The Normal Heart is of course way different than all of those. It actually didn’t have a lot of score, mostly songs, but we wrote a number of different types of themes, some simple piano, beautiful emotional cues and then some ambient textures. During that project we ended up working with some of Ryan [Murphy]’s team, and that meeting so to speak, was what resulted in the call I got to submit some music for American Horror Story.

There’s one more show, which I’m working on now, Mr. Robot, that premieres in just about a month. It’s turning out really great. It’s about a computer hacker and it’s a drama with a little bit of a thriller thing, they’ve been doing some great promos. I know if I wasn’t working on it but saw these promos, I’d want to see it. The score is full on electronic, lots of pulses and sweeps and filters and some beats, lot of tension. It’s got Christian Slater as one of the cast members, it’s been a fun project.