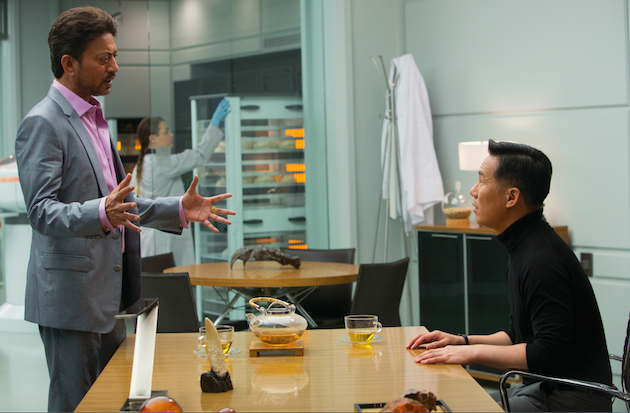 Jurassic World & the Science Behind Making a Dinosaur

C’mon science, it’s more than 20 years since the first Jurassic Park came out, why don’t we have dinosaurs running amok yet? The movies, based on Michael Crichton’s sci-fi novel of the same name, basically laid a road-map for you to bring the huge, prehistoric creatures back from extinction. You just need a dino-blood loving mosquito trapped in amber for at least 65 million years and boom, there’s your genetic material right there. Clone away!

Well, apparently it’s not that simple, paleontologist Jack Horner explained in his 2011 TED talk Building a Dinosaur from a Chicken. "If you actually had a piece of amber and it had an insect in it, and you drilled into it, and you got something out of that insect and you cloned it, and you did it over and over and over again, you'd have a room full of mosquitoes," he said. This is because, as Phil Plaitt explains on Slate, the dinosaur DNA would be scrambled in the mosquitos gut. When they tried to explain this away in the original Jurassic Park by saying the missing dinosaur DNA was filled in by frog DNA, they got it wrong again. That also wouldn't work, as you'd be getting a soufflé of dinosaur, mosquito and frog DNA (imagine that creature).

Horner, curator of paleontology at Montana’s Museum of the Rockies and co-author of How To Build A Dinosaur: Extinction Doesn’t Have To Be Forever, has acted as a technical advisor on all four Jurassic films, including the latest, Jurassic World. He is also said to be part of the inspiration for Sam Neill’s character from the early films, Dr. Alan Grant.

The dinosaur star of this film, the bigger, badder Indominus Rex, is “scientifically more plausible” than its T. Rex predecessors, Horner said in an interview with the BBC, because it is the product of genetic engineering, rather than just the retrieval of dinosaur DNA.

“We don’t have dinosaur DNA but we can make transgenic animals,” he explained. “The cool thing about making a hybrid is that we can take a whole bunch of genes from other animals and mix them together to make a new animal, which is actually more plausible than bringing them back.”

The dinosaur he helped dream up, Indominus Rex, is a hybrid with the body of a T. Rex but with bigger teeth, longer arms and distinctive head ornamentation. Its genetic material is a combination of several dinosaurs, such as the Gigantosaurus and Rugops, as well as species living today. So while it’s slightly more plausible, we’re still well in the realms of sci-fi because we don’t have any actual dinosaurs or dinosaur DNA to mess around with.

What we do have, however, are chickens. Birds being the closest living kin to the dinosaur mean that reverse engineering a chicken to create a ‘chickenosaurus’ is within reach. As Horner told Live Science "From a quantitative point of view, we're 50 percent there." Researchers announced last month that they had successfully modified the beak of a chicken embryo to resemble the snout a dinosaur. Horner said there are three other major modifications needed for a chicken to resemble a little dinosaur. It would need teeth, a long tail and revert its wings to arms and hands.

And, while Horner and his ilk are busy trying to cook up a dinosaur, scientists around the world are busy reclaiming land to recreate bygone eco-systems. One example is Oostvaardersplassen, a 15 thousand acre park in the Netherlands that mimics a Paleolithic landscape, and is populated with descendants of the sorts of animals that would have inhabited the region in prehistoric times.

And, while we don’t have dino genetic code, we do have the DNA of another more recently extinct species: the woolly mammoth. Last month Harvard geneticist George Church and his colleagues announced they have inserted the DNA of a woolly mammoth into lab grown elephant cells.

Put the two together and bing bang boom you have woolly mammoths roaming a Paleolithic landscape. It’s not quite a dino theme park but it’s not far off. Science, we take it back. You’re ok.