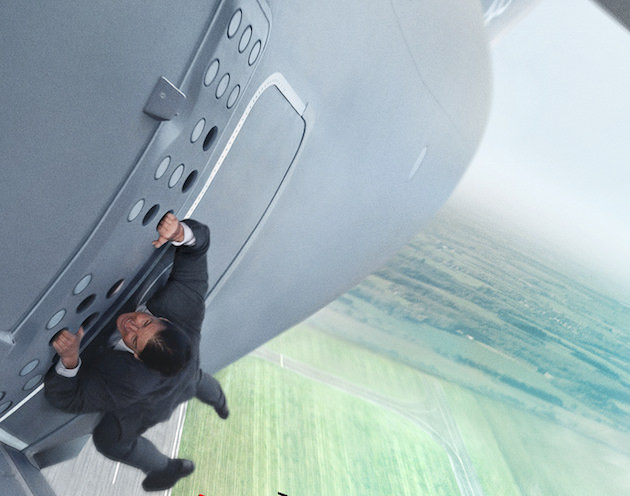 Tom Cruise’s stunt exploits are legendary, and in Mission Impossible: Rogue Nation, he might of completed his most insane stunt ever. Cruise hung off the side of a an Airbus A400M as it rose 5,000 feet in the air above the British countryside. Is this Cruise’s stunt masterpiece, and can it ever be topped?

Previously, in Mission: Impossible 2 (in which he tore a shoulder muscle jumping between rocks), and with the help of some wires and upper body strength, dangled off the edge of a sheer rock face in what was then his riskiest stunt. Yet this feat of daring was easily eclipsed by the work he did in Mission Impossible: Ghost Protocol, when he went Spider-Man outside of the Burj Khalifa in Dubai, the world’s tallest building. Cruise was a mile and a half above the ground, dangling, swaying, and running across the glass face of the building in the film’s signature sequence. Cruise's stunts have taken their toll; he's broken his nose three times and his leg once.

Cruise and director Christopher McQuarrie were well aware they’d have to top the Ghost Protocol stunt. They told Yahoo! UK that it was actually production designer James Bissell who gave them the idea. “While searching for different locations, the production designer James Bissell bought me a model of this Airbus airplane and presented it as something we could use in the movie. I suggested to Tom, ‘What if you were on the outside of this thing when it took off?' I meant it as sort of a half joke, but he said back to me, ‘Yeah I could do that!’”

All the filmmakers needed to figure out after that was how to pull this off and keep Cruise alive. This meant figuring out how to securely attach a camera to the side of the plane so that it wouldn’t dislodge during takeoff and brain Cruise, who would, of course, be hanging off the side of the plane. McQuarrie has hinted that this stunt, as insane as it is, might only be tied for the craziest sequence in the film. Could it be the water stunt briefly seen in the trailer?