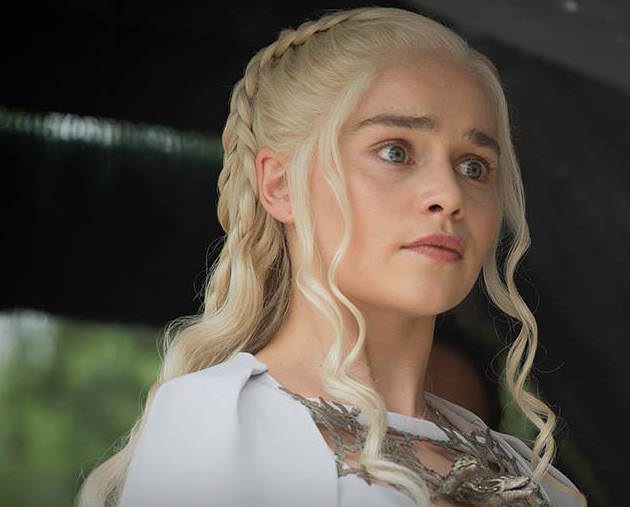 Getting Gut-Punched by Game of Thrones “Dance of Dragons”

If you haven't watched last night's episode, read no further.

Well, the moment fans have been dreading for two seasons finally came to pass last night, and it was even worse than we feared: Stannis Baretheon gave in to Melisandre and had his lovely, doomed daughter Shireen killed. And not just killed, but burned alive. In a show that’s had it’s fair share (and other show’s fair shares, really a ton of shares here) of brutal deaths, Shireen’s was, by far, the worst. Being pretty sure she was going to die for a long time did nothing to soften the atrocity once it occurred. The things people are willing to do to sit on the Iron Throne is really, really insane.

Think back on how lovely the scene between Stannis and Shireen was in episode four, where he told her the story of her birth and he called her, touchingly, achingly, Princess Shireen of House Baratheon (at 0:14 seconds in here). It was a side of Stannis we’d never seen, and unlike the purely political anointment of turning Ramsay Snow into Ramsay Bolton by his miserable father Roose, there was nothing political about Stannis calling his daughter by her rightful title. In this moment Stannis let her know he was not ashamed of her, and was, in fact, was proud to call her his daughter. In retrospect, this scene is all the more powerful considering Stannis would allow her to die in the most awful way, publicly, to claim the title he covets beyond all else—the ruler of Westeros, the man on the Iron Throne. In the opening seconds of the below clip, watch Stannis explain to his daughter (without telling her what he's actually talking about) why he has to make this choice.

The thing is, this all happened because of Stannis’s insistence on marching on Winterfell despite the wise (but so often ignored) counsel of his right hand man (save a few fingertips) Davos, who suggested they wait until Jon had returned with his wilding reinforcements. But no, Stannis wanted to march on Winterfell now, and while his men are freezing and starving—and made more miserable by a nighttime raid by uuber-goon Ramsay that destroyed more food and burned some poor horses—he gives in to Melisandre and burns Shireen in order to “fulfill his destiny,” which at this point seems to be about killing every member of his family (remember, he killed his brother Renly with the help of Melisandre).

Watching Shireen walk towards the platform that will be her pyre is incredibly difficult. Actress Kerry Ingram delivers a haunting performance as Shireen's fear grows. "What it comes down to is ambition versus familial love," series co-creator David Benioff says, and we know where Stannis will come down on this. Stannis wants that throne, believes it to be rightfully his, and anything that doesn't put him on that throne, including his family, is expendable. Stannis's great strength is also his greatest weakness; he is willful in the extreme and once his mind is made up, he will never, ever waver.

While Stannis watched Shireen burn (Stephen Dillane does such great work on this show, the haunted look on his face in this excruciating moment that perhaps, just perhaps speaks to him wondering if all these hideous sacrifices will be worth anything), we then begin to hear cheering—this isn't coming from the morose looking soldiers surrounding poor Shireen, this cheering is half a world away, in Meereen, where Dany is watching fighters relieve one another of limbs (and a head) in the fighting pit. Here, death is a spectacle, sport, something for the Meereenese masses (and their queen) to enjoy. Only Dany’s not enjoying it, and appears even more pained when Jorah Mormont (Ser Friend Zone himself) takes his place in the pit and nearly gets himself killed. Only we all know Jorah can fight, and after a very close call (and after being wounded several times), Jorah not only comes out victorious, but he saves Dany’s life with a well timed and perfectly thrown spear into the heart of a Sons of the Harpy assassin coming up behind Dany (for a split second it seemed like he was trying to kill Dany and my brain sort of melted).

And then we realize, along with Dany, Tyrion, Dany’s annoying husband Hizdahr, Missandei and the rest of the crew that the grandstands (or whatever you call the seating area in a Meereen fighting pit) are positively filled with masked Sons of the Harpy, and that they are quite intent on assassinating Dany and everyone else in her group.

A few things before we get to that ending (that ending!)—first, how did Daario, who seems a pretty capable protector to Dany (as well as lover), not notice a large Son of the Harpy coming up behind his beloved queen? I mean, dude, get your head in the game. Second, there were a lot of Harpys in the crowd, like, there seemed to be as many assassins as there were regular folks just coming out for a little Sunday slaughter. Dany’s Harpy problem in Meereen appears to have metastasized. Third, Tyrion has become quite the brute! He saves Missandei by dispatching a Harpy quickly, effectively, brutally (remember, it was only two episodes ago where he beat down, and chain-whipped, a slaver). And finally, fourth (and I didn’t think of this myself, I had to read it online this morning), when Jorah, long suffering Ser Friend Zone, finally gets to get right himself in the eyes of his beloved, and he gets to touch her when he helps her down to the pit—Jorah has just potentially killed Dany. The man has greyscale, a contractable disease he could have just knowingly passed to his queen.

Anyway, Jorah tries to help Dany out of the pit but there's no way out—soon they’re all surrounded, our “good” guys, by dozens of Harpy’s in a fantastic set piece. Suddenly the queen and her entourage are now fighting for their lives in the pit, outnumbered and out maneuvered. This episode was nimbly directed by David Nutter, the same guy who gave us The Red Wedding, still the most shocking GOT episode, and the man knows how to stage a swift, tense action scene. In the Shireen scene, Nutter forced us to listen to the young princess die, but he didn’t make us watch her actually burn. For the Meereen scene, Nutter gave us the spectacle we’ve been waiting for since the show began—Dany closes her eyes and channels Drogon, and in easily the best use of a dragon the show has had (note how exquisitely detailed Drogon is when he turns to face his mother, screaming), Drogon delievers. He fries a bunch of Harpy’s, rips a few in half with his teeth, and then, to the astonishment of everyone in the pit and at home watching, Dany mounts her dragon and flies away.

She just totally flies away. See ya, gang, good luck getting out of the pits, I've got to go as I booked this flight ages ago.

The man Arya sees in Braavos is Meryn Trant, who was one of the names on her kill list. He seems to recognize her, but either isn’t sure or doesn’t believe his own eyes, and besides, he has more pressing matters considering he’s a disgusting pig who has just chosen a young servant girl in the brothel Arya followed him into. Here’s hoping Arya gets to cross him off her list.

Thank god good old Bron was spared in Dorne, where the crippled, wise Prince Doran has seemed to have brought Ellaria Sand to heel and released both Jamie and Bron.

The look Olly gave Jon when he made it back to Castle Black was very assassin-y, don’t you think?

Speaking of doom—something bad is going to happen to Mace Tyrell in Braavos, right?