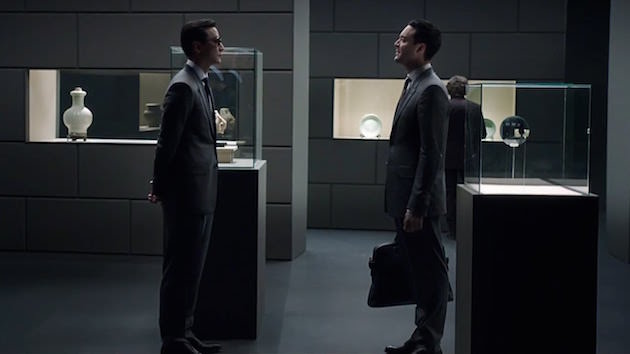 From Bigelow To Scorsese: 7 Music Videos & Commercials By Iconic Directors

There’s something profound to appreciate when it comes to renowned film directors who’ve pursued telling stories with images beyond the silver screen. For many, this has meant moving into the world of the music video or the high-end fashion commercial. You’re probably already familiar with some of these high profile collaborations—from Tim Burton directing “Here With Me” and “Bones” for The Killers to Sofia Coppola directing a risqué video for The White Stripes or even several of Martin Scorsese’s ad campaign ventures with brands such as Dolce & Gabbana.

Here are 7 more instances of where famous directors, during various stages of their careers, took a creative plunge and came out with impressive visual art.

The Low-Down: “Vogue” is the result of what happens when the reigning Queen of Pop meets the reigning king of “Fight Club” pop cult fame (although, of course, Fight Club was released nine years later.)

Shot entirely in black and white, Fincher’s touch on Madonna’s hit remains one of her career highlights and as one of the most celebrated music videos in history. Fincher’s singular directing style are on display in “Vogue”—most notably, the sensuous play of light and shadow. An all-black ensemble contrasts against the emphasized paleness of Madonna’s white skin and blonde hair, creating a mesmerizing and distinct display of everyone’s favorite Material Girl.

“Vogue” was Fincher and Madonna’s second collaboration—the haunting stylings of “Oh Father” (1989) being the first and the darkly voyeuristic “Bad Girl” (1993) being the last.

The Low-Down: Fashion and film meet in a way only the award-winning South Korean director Park Chan-wook could have executed. Working with with Stefano Pilati and Ermenegildo Zegna, the short film, “A Rose Reborn” premiered during Shanghai Fashion Week in 2014 and starred Jack Huston (American Hustle, Boardwalk Empire) and Daniel Wu (Blood Brothers, Europa Report). The duo goes on a beautifully symbolic journey (all symbolism explained via the film’s official website) that takes them around the globe. East meeting the West isn’t an uncommon theme, but the cultural collision, in this case, unites itself by one appropriately common theme—the excesses of Zegna’s luxury designer Italian menswear.

The Low-Down: While this cinematic entry could technically count as cheating, given the soundtrack and film relation to Dangerous Minds, who can argue the simple brilliance of Coolio rapping to a steely-eyed Michelle Pfeiffer?

Rocking a leather jacket, Pfeiffer reprises her movie role as LouAnne Johnson, a retired Marine who makes a lasting impact on her class of rowdy students from underprivileged socioeconomic backgrounds in “Gangsta’s Paradise.” Here, Fuqua isn’t far from his element in the genre of the crime thriller, those sensibilities present in the aesthetic makeup of the production. Speaking of aesthetics, Fuqua also has fun with smoke and shadow, weaving Coolio and Pfeiffer in and out of darkness and gaudy yellow lights as their tension builds in the backdrop of Coolio’s coolly rapped monologue.

The Low-Down: Before Bigelow became the first woman in history to win the Academy Award for Best Director, she was kicking it back with New Order and delving shamelessly into the roots of ‘80s glam metal at its' finest.

It’s also quite the shift when you compare the hip-gyrating, wigs-larger-than-life wearing scene back then to Bigelow’s current day spread of action, thriller and war films. We enjoy pre and post Oscar Bigelow—there’s still plenty of room to appreciate the sumptuous amounts of leather, as well as the likes of Bill Paxton and Rae Dawn Chong in the throes of intimacy.

The Low-Down: Extravagant displays of glitz and glamour? Check. A gorgeous lead (in this case, supermodel Gisele Bündchen?) Check.A hot pop track pulled from another era (in this case, “You’re The One That I Want” from Grease?) Check. A steamy romance? You bet.

All of usual suspects of Luhrmann’s grandiose style are evident in his thrilling partnership with Chanel for the brand’s signature No. 5 perfume. This short film came ten years after Luhrmann did a Chanel No. 5 commercial, at the time, starring Nicole Kidman. With singer Lo-Fang crooning the Grease hit to Bündchen’s modern-day woman who ultimately has it all (including costar Michiel Huisman’s love—he's Daario on Game of Thrones, gang), one can’t help but be reminded of what Lana Del Rey’s “Young and Beautiful” did for The Great Gatsby movie soundtrack. Undoubtedly, Luhrmann nailed it (again) for the lovely No. 5.

The Low-Down: Another collaborative match made in heaven, it makes sense that the King of Pop would join forces with a talent as reaching and expansive as Scorsese’s.

“Bad” is no “Thriller” (that directing honor went to John Landis), but nonetheless it holds a special place in MJ’s legendary career as a groundbreaking visual artist. Unlike “Thriller,” which echoes the sentiment of a short film, “Bad” is more an ode to Jackson’s iconic dance moves. Emphasized by hard cuts that align with each twist and turn of Jackson’s body, Scorsese shows an innate understanding of rhythm—the urban setting acting as the perfect marriage between Jackson’s slick choreography and Scorsese’s mastery of channeling the charming bad boy swagger.

Who’s Also Directed: Her, Where The Wild Things Are, Being John Malkovich

The Low-Down: The delightfully chaotic workings of Jonze have found their fair share in music video collaborations with the likes of Kanye West, Fatboy Slim and The Beastie Boys. But we have to say—this hilariously anarchic (and woefully underrated) commercial for Gap announcing the brand’s remodeling efforts takes the cake by far. The Gap ultimately pulled the spot, which shows the store being gleefully dismantled by customers. The highlight is a woman driving her car right through the Gap window. Considering their current financial woes, perhaps they might consider replaying this brilliant little ad campaign?