Feeling the Music of Fargo With Composer Jeff Russo

You would have been excused for wondering how in the world the folks behind FX's Fargo were going to take a classic Coen Brothers film and turn it into a viable television series. The challenge of adapting something beloved is hard enough when what you're adapting is a book, but to take an award winning and critically acclaimed film and turn it into a television series? That takes guts.

One of the ways in which Fargo has managed to satisfy, along with it's great scripts, wonderful performances (especially the fabulous Allison Tolman), and inspired direction has been through the use of the score. Clever themes, subtle shifts in mood, and a connective tissue to the beloved film have come from musician and composer Jeff Russo. The two time Grammy and Emmy-nominated composer is already hard at work on season two of Fargo, as well as composing for Starz's original drama, Power, from executive producer 50 Cent, and just recently completed work on A&E’s horror series, The Returned, as well as CBS’s newest CSI franchise, CSI: Cyber, starring Academy Award winner Patricia Arquette. Russo is also excited about his work on Spike TV mini-series, Tut, starring Ben Kingsley.

We spoke to Russo about how he found the sound for Fargo, what it's like to write music for 50 Cent's Power and more. 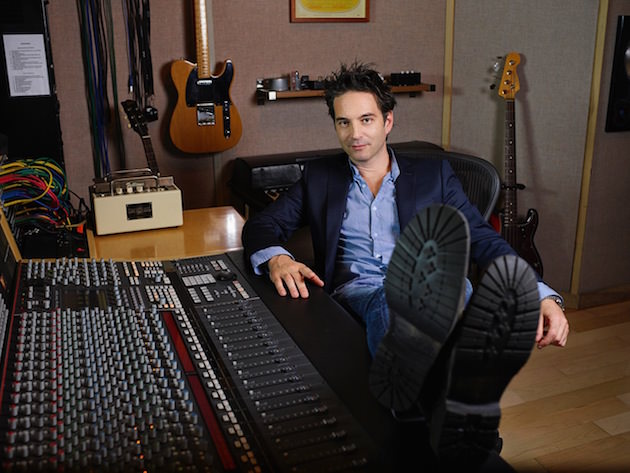 Tell me about finding the music for Fargo. How much did you take from the film, and how much was your own creation?

Fargo's difinitely different than any other show or movie I've worked on. The way we go about spotting and writing music for it—I tend to write for Fargo the way I do for a movie, which is to write thematically, creating themes and then expanding on them. For the second season we’re creating all new themes, save for the main title, which has been trip because it's like writing for a whole new movie. It’s really interesting that way, trying to figure out what the sound and tone is for season two without straying too far from season one and the through line. It’s a very interesting process to start from scratch. Like season one, coming up with a new identity and not trying to be the movie, because now we’re not really competing with the movie anymore, we're competing with ourselves and season one. It’s the most enthralling and intriguing way to write music.

How have you moved away from mimicking the sound and feel of the film?

It's interesting, the way you carve out your identity is to create thematic themes and melodies, and that’s the thing I didn’t want to use from the movie. The tone from season one was an extension of the tone from the movie. I used an orchestra and a big emotional sound, which does carry over from the film, but in terms of creating a unique identity for the show, I had to write new melodic themes for the characters and location of the show. I looked at it like, 'This is a whole new thing.'

Where did you come up with the fantastic opening theme?

The main title and the main theme for the show is the thematic element for the location; the grand vastness and loneliness of what you see. To achieve that we used a large orchestra, strings and woodwinds and brass, with minimal percussion. It was a traditional orchestral environment to capture the tone we were looking for.

What about writing music specifically for the characters?

For the characters, there were different themes for different characters and combinations of characters, which is sort of how I had to look at it. Themes can be character based or situation based. There was a theme for Molly, Lester, Malvo, and then I'd write music for when Lester and Malvo were together. I find that I write themes where I feel like they’re necessary, where I think, 'This needs to be something that signifies when X or Y happens.'

What's your production process like on Fargo? Is it as insane as most TV productions are?

We were able to slow things down because we’re a cable show. I started writing for the show when the first script was written. We had a little more time than a traditional show. When I got that first script and sat down with Noah [Hawley], I read it and thought, wow, this is unbelievably fantastic. I immediately sat down and wrote the theme.

What else are you excited about that you're current working on?

I’m really excited about Fargo season two, which is really fantastic. I just finished writing and recording for the miniseries Tut, which was really great because it’s this massive, epic action score. This period, dramatic score, a lot of fun to write and record. Tut is coming out on Spike TV.

Tell me about writing the music for Power.

It’s interesting, a totally different mindset. Writing for Power is not quite as melodic as writing for Fargo, but it’s definitely music-centric. The music I write is used to underscore the vibe of the whole show. The thematic elements are used way more subtley than any other show I’m working on. It’s very minimal in terms of the way the score is used and the way I write. It’s not as broad. But again, it's a lot of fun to write because I get to underscore what’s happening on screen. I play against what you’re seeing.

Is there a particular sequence you're really proud of?

It’s really interesting, it varies so greatly from project to project and how I’m involved in the telling of the story. In Fargo, music is a really important element of telling the story. A lot of television, music leads the emotion—we try very hard to allow the storytelling to lead and support the story. With that, one of the greatest moments was to help give life to the Malvo character from season one, which was this bouncy bass line. It started out a jazzier thing, but as I continued to write for the show, I realized that the upright jazz bass was a little too slick, and maybe it should be more in our orchestral vernacular, I changed it to a pizzicato, as I watched the character develop, what I realized is this bouncy pizzicato string line playing against this more legato melody for Malvo really helps develop his dark and light side. He had this swagger and the music helped accentuate his swagger, and I think this piece of music went a long way to illustrate that. When I saw it on screen and I sculpted the music more, I realized how important the swagger he had was.

Fo this miniseries Tut, creating themes for this character as the title character progresses from 9 to 17, and follows his track as the pharaoh, was really important to the storytelling. I sort of felt the same way in how the theme develops from the very first time you see Tut to the very last time you see him. It begins as a simple melody, and then at the very end it has become this way more complex, thought out way of presenting the same melody.

The great part of writing music for film is you get to create and track a character as that character evolves. Although we did that in Fargo, for a show like Cyber it’s very much static, the characters don’t necessarily evolve, they have moments and then solve crimes and then they move on. Even with The Returned, there was a character development that happened with these characters coming back to life and then evolve again. I had to create a character theme and then develop that theme, and then redevelop that theme as they change. They’ve come back, but they don’t necessarily realize they’ve come back, then they do realize it and start to change.

You're a bit of a musical polymath, right? You can play just about anything?

I can pretty much play anything that has a string on it that’s fretted, a guitar, bass, mandolin, ukulele, I also play drums and piano. I’ve been playing music for so long that I just pick up an instrument and play it. I don’t mean for that to sound flippant. I never really studied music, I’ve just been a student of music I should say.

To sit and write words and have it make sense and have it tell a story is so foreign to me. Writing lyrics tells a story in a much different way than writing a story that has a beginning, middle and an end. When I sit down and watch something, in order to figure out where the music should go, it sort of just comes out naturally, it’s not something I really think about. Sometimes it doesn’t come as easy as others, you watch it again, go have a coffee and watch it again, but the creative process for music is I’m sure the same as any creative process, it’s just a question of finding that right muse and letting it come out. It’s about capturing a moment.