You may watch Homeland and assume the reason you're so riveted is the subject matter (international espionage), the performances (Claire Danes brilliant, bi-polar CIA operative Carrie Mathison, Mandy Patinkin's CIA chief Saul Berenson, etc.), and, of course, the relentless action. And you wouldn't be wrong. But what you might be missing is another key element that makes watching Homeland so intense: it's edited to put you, the viewer, in the character's shoes. As Emmy-winning editor Jordan Goldman, ACE, explained to us, the folks behind the camera and those, like him, in post production, make sure the viewer rarely knows more than Carrie, Saul, or any of the other characters do, so when one of them walks into a trap, the viewer is walking into it with them. "We’re trying to make this a subjective experience, where you don’t know what’s going to happen to, which adds a sense of dread and thrill when people watch these episodes," Goldman says.

We spoke with Goldman about what it's like to cut a show that's so relentlessly paced, what methods he and his fellow editors employ to keep the pace, and how they manage to make us feel like we're there. 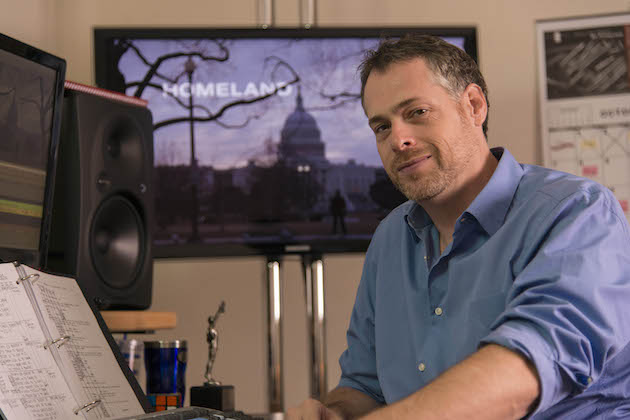 Walk us through your process for cutting an episode of the show.

It all begins with a script, of course. And then, at the beginning of each episode we have a tone meeting: the showrunner, writer, director, producer of the episode, and the editor all get on a conference call, or meet in person if we can, and go through the episode scene-by-scene. This is a chance for the showrunner and writer talk about the goals for the characters in every scene, and what challenges their might be.

Then the crew goes out and shoots. The day after they shoot something, that footage comes into the cutting room. We generally get around 7-8 days per episode. They shoot the show out of sequence, so on any given day the dailies that come in from the previous day might be scenes from the end, the middle, the beginning, all based on what locations were available, the actors' schedules, etcetera. So when the dailies arrive, I’ve got my notes from the tone meeting, notes from the script supervisor, notes from the director, and I get to work on all of the dailies that are circled takes (the ones the director likes), then I start building the scene in the way it makes sense to me, staying in line with the tone meeting and the way the director shot it. After that, it really becomes all about character and performance.

Then we present this to the director, who has four days to go in and change anything they want—they might change performances, add air, cut out air…

What does that mean to add or cut out air?

Air is silent time, so you might have a long period where somebody is looking at somebody else, thinking about what they’re going to say—to increase the pace, we’ll cut the air out, or, if it's an emotional scene, we might want to put more air in.

So what happens once the director has gone over your edit?

Once they've taken their four days to make the edit conform to how they see the episode, they send what is now called the directors cut to the producers, who make their notes, then they give this back to me. This is where we may find we need new scenes, new dialogue, or a pickup shot of a folder, a bomb, it could be anything. I work with the showrunner Alex Gansa for a week or more, and he does everything he needs to do to make the episode what he wants it to be. Then we send the episode to Fox, they give us a round of notes, we make those edits, then it goes to our network, Showtime. Then they give us a round or two of notes, which we do, and once we’ve got their final batch of notes, the showrunner and I sit once last time, going through the show, and do little finesses and tweaks.  At this point we're ready to lock the show.

How much time has passed throughout this process?

About a month has passed since that first day of dailies. By this point, they’ve filmed two more episodes—this is why hour long dramas always have three editors who rotate episodes. By the time I’m done with episode one, they’re already onto episode four. That’s why I cut episodes one, four, seven and ten.

What methods do you rely on to maximize audience identification with the characters?

We like to try and be subjective whenever possible. An omniscient show never takes the character’s POV, but we like to see the show through the character's eyes. We’re partial to using long lens shots, over the characters backs or shoulders, beacuse I like to reveal things along with the character. Rather than have the character step into an environment they’ve never been before, I like to go in with them. On the Shield, we never went into an environment unless we were coming in over their shoulder. We try to always keep it grounded. Realism is really important, and so is audience identification. We’re looking for performances that are going to feel real, and genuine, and our actors are phenomenal so it happens all the time.

Do you cut the show differently depending on Carrie's mental state?

When Carrie’s having a manic episode, we’ll generally employ a lot of jump cutting, which helps you get into her state of mind, so the audience feels a little crazy. We really don’t want to give away things before Carrie knows them. We don’t want to show a guy hiding for three hours to snipe her when she passes by–we’re going to be with her when the shot goes off, whenever something happens, and live in that moment with her, as opposed to knowing that it’s coming for her.

An example from episode 10, where the Taliban invade the embassy, is that Quinn and the marine who’s helping him, they go down to the basement and discover a bunch of Taliban down there, so the audience discovers them the same time the characters discover them, rather than showing the Taliban beforehand, so you learn when the character learns. We’re trying to make this a subjective experience, where you don’t know what’s going to happen to, which adds a sense of dread and thrill when people watch these episodes.

Do you have a favorite sequence from season four?

One that comes to mind is episode 10 of this season, "13 Hours in Islamabad." There’s a long sequence where Haqqani (Numan Acar), the Taliban leader, attacks the US Embassy in Islamabad with a group of soldiers, and they wind up taking a lot of hostages. They go to the safe room, or vault, where the Ambassador, the head of the CIA and a bunch of employees are locked in. We have this fantastic sequence where Haqqani is standing outside of the door of the vault, and he’s looking into the video camera mounted outside the door. He knows the people he wants are inside that room. The people in the vault are being as quiet as they can be. Eventually the Ambassador tells Haqqani that the Pakistani army is going to kill him them all. Haqqani in turns tells the Ambassador them unless he gets a folder of information that he wants, he’ll start killing hostages.

Basically at any point of that scene, we could be in the hallway with Haqqani and his guys, or, in the vault with the Ambassador, Martha (Laila Robbins) and their people. The longer you stay in the vault, the more you create a feeling of being trapped with imminient danger outside. The director, Dan Attias, had an interesting idea of staying inside the vault until the door opens. So we cut it that way, so the viewer is inside the vault the whole scene, and you never go outside to be with Haqqani and his troops, but ultimately it wasn’t successful because some of the main hostages outside the vault were characters we cared about on the show. When we stayed inside the room, it wasn’t as impactful if those two get shot and we’re not aware.

So did you split the difference?

Well when Haqqani gets to our characters who we know really well, we wanted to be outside the hall with them. So when we realized we weren’t getting maximum impact, we did a new version where we’re out in the hallway fairly quickly, so then the question became whenever Haqqani speaks, do you want to be in hallway, or do you want to be in the vault, seeing him in the video screen? It turns out it’s scarier when he’s on the video screen, as he’s the monster at the door. So this is the way you get to play as an editor. Is it more interesting to see somebody say something, or, is it more interesting to watch someone hear it? Would it be more interesting to hear Darth Vader say “Luke, I am your father,” or watch Luke’s reaction to that. Is it better to be on the face of the reaction or the speaker, that’s another thing editors do a lot of.

The other thing that came into play in that sequence was Quinn, the CIA assassin guy, shows up to try and save the day, so now we have a third point of view, which is Quinn looking down the hall at the guys yelling into the camera outside the vault. So we covered it in three ways, and then it became a question of which POV tells the story in the most interesting, compelling way, that’s going to maximize audience identification with the characters.

Featured image: Jordan Goldman in the Homeland editing bay. Check out Jordan's new book, “How to Avoid the Cutting Room Floor: An Editor’s Advice for On Camera Actors,” here.